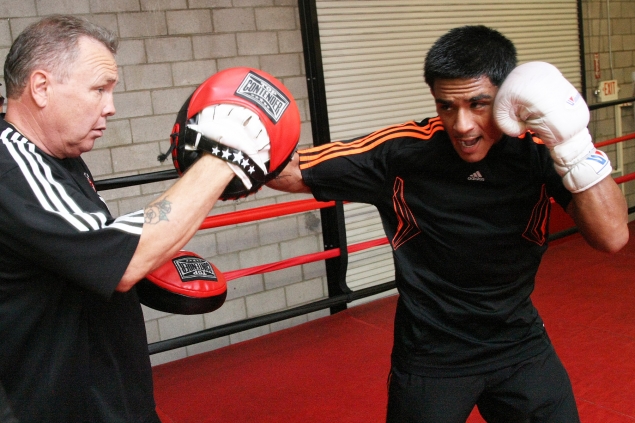 A 23-year-old southpaw who is managed by Frank Espinoza, Magdaleno (19-0, 15 knockouts) has stopped his past six opponents.

“Jessie is explosive, power in both hands, great defense,” said trainer Joel Diaz, who also handles two-division title winner Tim Bradley. “He is among the best fighters in his division and is is very close to getting an opportunity for a world title.”

“Erik knows this is a very difficult fight,” said Garcia. “But he has trained like never before with [RING No. 4-rated WBO featherweight beltholder] Vasyl Lomachenko and [RING No. 9-ranked] Jesus Cuellar to get ready for Magdaleno. This should be a good battle on Saturday night between two hungry prospects.”

Also on the card is a fight between southpaw featherweight Victor Pasillas and Karl Garcia of Baymon, Puerto Rico.

“We just couldn’t find an opponent who was suitable,” said Loeffler.

A 29-year-old Cuban southpaw, Mike Perez is 1-1-1 over the course of his past three fights and was last in action for a disputed split decision loss in July to undefeated Bryant Jennings.

Prior to facing Jennings, Perez battled once-beaten Carlos Takam to a draw in January that had followed a brutal November 2013 10-round unanimous decision victory that left Magomed Abdusalamov in a medically-induced coma.

In Friday’s main event of Friday’s card, which will take place at the Chumash Casino Resort in Santa Ynez, Calif, Perez (31-1, 20 KOs) will take on Maicelo (21-1, 12 KOs) in what promoter Gary Shaw called, “a true crossroads fight.”

Since falling by unanimous decision to Yuriorkis Gamboa in June 2013, Darlys Perez, of Columbia, has won three straight fights. Perez, 31, was last in action for a sixth round knockout against Jaider Parra in October, ending Parra’s three-fight winning streak.

Maicelo, 31, is 4-1 with two knockouts since August 2012, when he made his debut under Shaw with a unanimous decision over Wilfredo Acuna in support of Perez’s split decision victory over Bahodir Mamadjonov.

In his last fight in August, Santana scored a fifth-round knockout over Luis Alfredo Lugo that had followed a unanimous decision in June over previously undefeated junior middleweight Eddie Gomez.

A rising junior welterweight, Mena has won his past three fights by knockout and was last in the ring for second round knockout of William Tapia on Dec. 7.

Mena has not yet fought a boxer with a winning record. In addition, with the exception of his sixth round technical knockout over Ambioris Figuero (who entered with a mark of 13-13-5 in August 2008), Mena has not even faced a fighter with a .500 record.