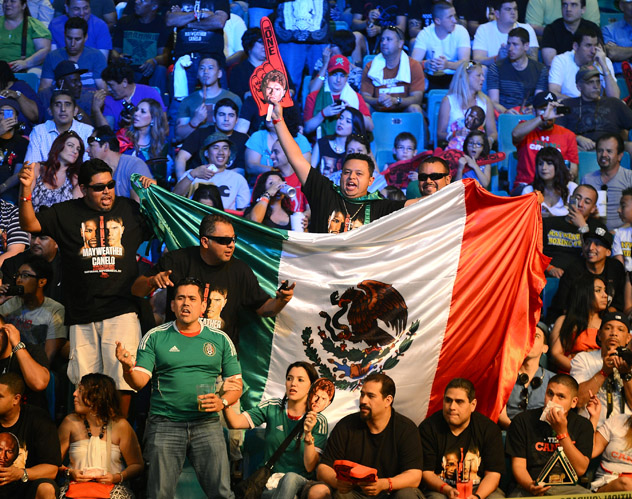 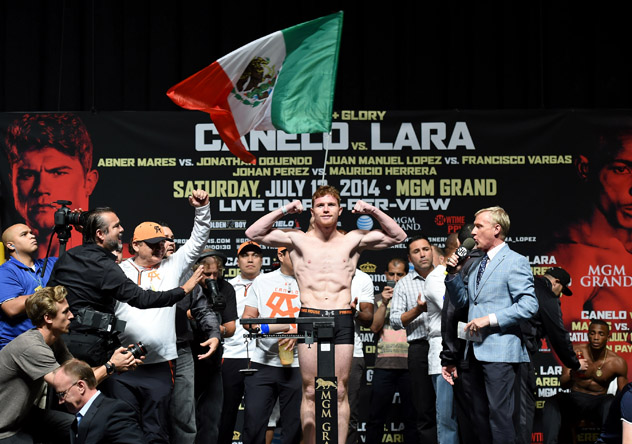 Canelo Alvarez weighs in beneath the Mexican flag for his fight against Erislandy Lara in 2014. Photo by Ethan Miller/Getty Images.

Canelo Alvarez reaffirmed his intention to face RING middleweight champion Miguel Cotto on May 2, responding to Floyd Mayweather Jr.’s assertion that he wants to fight Manny Pacquiao on that Saturday, which falls on the weekend before Mexican holiday Cinco de Mayo.

Calling it “Cinco de Mayweather,” THE RING’s No. 1 pound-for-pound fighter announced during a Friday interview on Showtime that he “would love to fight Manny Pacquiao” on that May 2. This followed a Dec. 9 announcement by Golden Boy president Oscar De La Hoya that Alvarez has agreed to his side of the terms to fight Cotto on HBO Pay-Per-View on that date.

THE RING’s 147- and 154-pound champion, Mayweather made it clear that he doesn’t plan to give up that Mexican holiday weekend, on which he has fought five times since 2007 ÔÇö including each of the past three years.

Alvarez, 24, who lost a majority decision to Mayweather in September 2013, stated this past September that he would seek to take back the Mexican holidays of Cinco de Mayo and Mexican Independence Day (in September) from Mayweather.

Cotto still is considering the deal to face Alvarez either in San Antonio, Dallas, Las Vegas or New York. Cotto-Alvarez could be a monster event given that Alvarez’s loss to Mayweather grossed a record $150 million, and Cotto is widely considered the most lucrative pay-per-view attraction in boxing behind Mayweather and Pacquiao.

“My promoter, Oscar De La Hoya, called me and told me that everything is fine. He’s working, and I trust him, so I’m just waiting to hear an agreement for the fight to happen. I’m not desperate,” said Alvarez

“I’m waiting on Oscar, and I’m very happy that the fight will be done very soon. … I’m the fighter, I’m just waiting. Whatever they say about the fight, I will be ready.”

“That weekend celebrates Cinco De Mayo, which is a Mexican Holiday, which commemorates the outstanding, courageous stand of a lot of Mexican civilians who turned back the French Imperial army, and it’s a significant holiday in Mexico and among Mexican Americans who live in the United States. That being said, neither Mr. Mayweather, nor Mr. Pacquiao, nor Mr. Cotto is Mexican. Cotto is Hispanic, but not Mexican,” said Arum of Cotto, who is Puerto Rican.

“The only Mexican in the group is Canelo Alvarez, who is a big attraction among the Mexican people. And to poach on that date, which is a Mexican holiday, by non-Mexicans, shows a terrible disrespect for the Mexican people, both those living in Mexico and those living in the United States. And anybody who does the poaching ought to be ashamed of themselves. That goes for hotels and that goes for fighters and that goes for any of us.”

Mayweather is currently aligned with Showtime, having fought four of six bouts stipulated by a multi-million dollar agreement he signed with the network and its parent company, CBS Corporation.

Officials from Showtime and HBO have reportedly discussed a joint venture between the networks similar to that which facilitated the fight between undisputed heavyweight champion Lennox Lewis and Mike Tyson in June 2002. Lewis scored an eighth-round stoppage victory over Tyson in the bout. Lewis and Tyson were affiliated with HBO and Showtime, respectively, at the time.

Arum said Moonves is “fully aware” of his feelings regarding Cinco De Mayo.