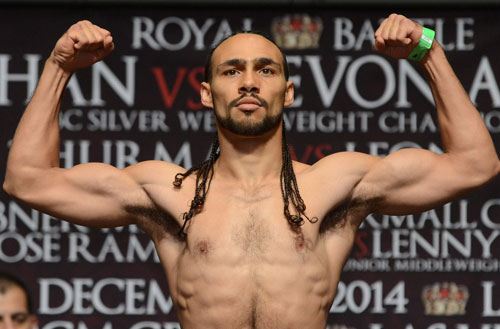 Promoter Bob Arum said a potential fight between Floyd Mayweather Jr. and Manny Pacquiao on May 2 — the same day on which Canelo Alvarez and Miguel want to fight — “is not going to happen” on that date.

Mayweather announced during an interview on Showtime Friday that he “would love to fight Manny Pacquiao” on May 2. Alvarez and Cotto have been negotiating to fight that Saturday night on Cinco de Mayo weekend, which Mayweather calls “Cinco de Mayweather.”

Arum, who promotes Pacquiao and has been working with Cotto in negotiations with Alvarez, said Alvarez is more entitled to the date because of his Mexican heritage.

Golden Boy Promotions President Oscar De La Hoya, who promotes Alvarez and has had a working relationship with Mayweather, agrees with that sentiment.

“Let me tell you something, and this, I really feel very, very strongly about,” Arum said. “That weekend celebrates Cinco De Mayo, which is a Mexican Holiday, which commemorates the outstanding, courageous stand of a lot of Mexican civilians who turned back the French Imperial army, and it’s a significant holiday in Mexico and among Mexican Americans who live in the United States. That being said, neither Mr. Mayweather, nor Mr. Pacquiao, nor Mr. Cotto, who is Hispanic, but not Mexican.

“The only Mexican in the group is Canelo Alvarez, who is a big attraction among the Mexican people. And to poach on that date, which is a Mexican holiday by non-Mexicans, shows a terrible disrespect for the Mexican people, both those living in Mexico and those living in the United States. And anybody who does the poaching ought to be ashamed of themselves. That goes for hotels and that goes for fighters and that goes for any of us. I’m willing to make that statement.”

Said De La Hoya: “Bob has promoted boxing for more than 50 years and understands the importance of the Mexican and Mexican-American fan. Canelo wants to take back the tradition and fight on Cinco De Mayo for his fans all over the world.”

Arum stopped short of saying he would not participate in the planning of a long-awaited Mayweather-Pacquiao showdown on the same date as Cotto-Alvarez.

“I’m not saying that,” said Arum. “I’m just saying that it’s poaching on a Mexican date and it’s disrespectful to the Mexican people. Period. I’ll make that stand.”

Mayweather made it clear with his announcement that he doesn’t plan to give up the Mexican holiday weekend, on which he has fought five times since 2007 — including each of the past three years.

“We’re trying to make that fight happen,” Mayweather said during an interview with analyst Steve Farhood as part of the network’s broadcast from San Antonio.

“… The fans would love to see the fight, and, of course, I want to go out with a bang. So let’s make this fight happen.”

Meanwhile, De La Hoya announced that Alvarez has agreed to terms for a May 2 fight against Cotto on HBO Pay-Per-View.

Alvarez, who lost a majority decision to Mayweather in 2013, announced this past September that he would seek to take back the weekends of the Mexican holidays of Cinco de Mayo (May) and Mexican Independence Day (September) from Mayweather.

Another potential conflict for that date is the fact that Cotto is now trained by Pacquiao’s longtime corner man, Freddie Roach.