Austin Trout would root for Miguel Cotto vs. Canelo Alvarez 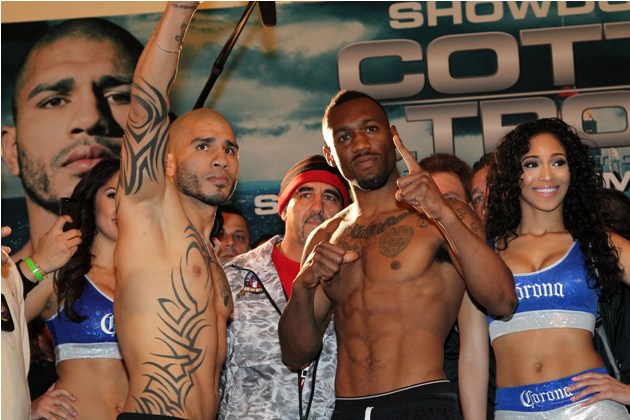 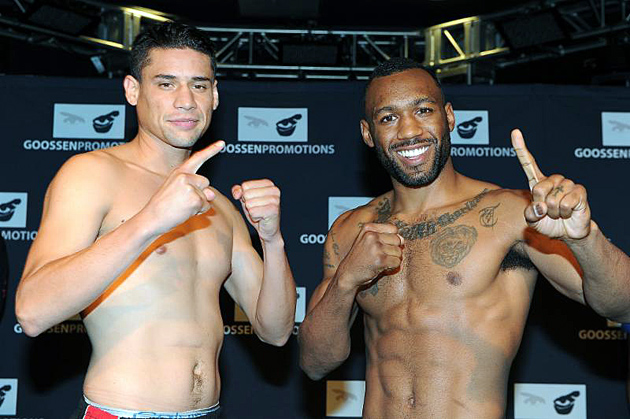 Austin Trout will be rooting for RING middleweight champion Miguel Cotto against RING No. 1-rated junior middleweight if their May 2 clash comes off.

“I believe that Canelo is going to win that fight if it happens, even though I’m pulling for Cotto,” said Trout, 29. “If Cotto wins, because I beat Cotto, I think that it would look better for me if Cotto wins.”

Trout (27-2, 14 knockouts) will try to look impressive on his own against junior middleweight Luis Grajeda (18-3-2, 14 KOs) in their headliner on Thursday at the Pechanga Resort and Casino in Temecula, Calif.

Trout and Grajeda weighed 156 and 155.6 in advance of the a card that is being handled by Goossen Promotions in honor of the late promoter, Dan Goossen, who died in September at the age of 64 of complications from liver cancer.

During an earlier interview with RingTV.com, Trout said he began training in Washington, D.C. in early October at the same gym as IBF junior welterweight titleholder Lamont Peterson, sparring with the beltholder as well as several others.

Trout has gone 2-2 over the course of his past four fights. In his last bout in August at the Pechanga, Trout rose from two third-round knockdowns and floored Daniel Dawson in the eighth of a 10-round unanimous decision, ending an eight-month ring absence.

Trout had previously been in action when he lost a unanimous decision to Erislandy Lara last December, which followed the loss to Alvarez. Before facing Alvarez and Lara, Trout scored his career-best win over Cotto at New York’s Madison Square Garden.

Grajeda, 27, has gone 4-2-1, with four knockouts over the course of his past seven fights and was last in the ring for a third-round stoppage win over Charly Soto last month.

Trout shared his thoughts on his training, among other things, below:

RingTV.com: So how was the training in Wasshington, D.C.?

Austin Trout: I was out there for about a month and half. I’m absolutely ready, man. It was awesome at Head Bangers’, man. I got all kinds of different work.

I sparred with Lamont Peterson to Anthony Peterson, Robert Easter Jr., Jamel Herring, Alantez Fox, who is an up-and-coming undefeated junior middleweight who is tall and lanky and very sharp.

There was Jarrett Hurd, who is another undefeated prospect who is damned good. I even got in there with Hank Lundy, man. I got in there and was just working with a whole bunch of people.

RingTV.com: What does that do for you?

AT: Being around all of those guys, man, it just made you have to work that much harder to want to get better. When you’re in there getting all of that work, you know, the cream rises to the top. You don’t want to be one of the guys on the bottom.

I’m constantly working on trying to get better. My boxing got better. But everybody was working with each other, and all of the egos were left at the door. It was a very team-oriented atmosphere, which is something that I hadn’t experienced since the amateurs.

RingTV.com: Your thoughts on the Cotto-Alvarez negotiations and what might have been?

AT: I’m not necessarily dwelling on what could have been. Looking back, I know where I stand and what could have happened had I won this fight or that fight. Of course, you’re sometimes going to look at that.

But I don’t usually look at things like that too often because that’s not what I want to dwell on. But if I’m looking at it now, though, I see that Cotto and Canelo has always been a mega fight that could happen between them.

To be honest, though, even if I had beaten Canelo, you know, I don’t have a whole country behind me, so it’s not like I have that massive following that he does. So even if I did beat Canelo, a mega fight might not have been in my repertoire, and that’s even if I had won.

I just think that Canelo and Cotto is a big fight even if I had won, because I think that’s just a fight that the fans want to see. I’ll definitely be watching that fight if it happens.

Cotto is strong, himself, but I believe that he will be the smaller guy in that fight. But we’ll have to see. So as I said, I hope that [Cotto’s trainer’ Freddie Roach can pull off a great game plan and that Cotto is able to pull it off.

But other than that, I believe that Canelo is going to win that fight, even though I’m pulling for Cotto. If Cotto wins, because I beat Cotto, I think that it would look better for me if Cotto wins.