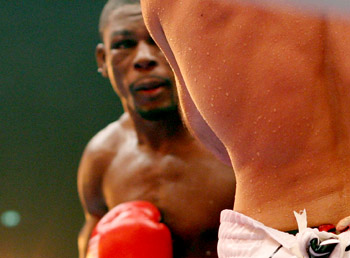 IBF middleweight titleholder Jermain Taylor pleaded not guilty on Monday to charges of first-degree battery and first-degree terroristic threatening for an August shooting of his cousin, according to a report in the Arkansas Times.

A pretrial hearing has been set for May 29, with the trial to take place on June 23 and 24, according to the Arkansas Times.

A former undisputed 160-pound champion who dethroned Sam Soliman for his current title in October, Taylor, 36, was charged last month with allegedly having shot his 41-year-old cousin, Tyrone DaWayne Hinton of Jacksonville, at his home in Maumelle, Arkansas. Hinton’s “lower extremities” were injured, according to Pulaski County sheriff’s deputies and The Associated Press.

If convicted, Taylor faces up to 26 years in prison, prosecuting attorney Larry Jegley of the sixth judicial district of Pulaski County said during an interview with RingTV.com last month.

Taylor was arrested and jailed overnight in Little Rock on Aug. 26 and released on $25,000 bond the following day. Taylor entered a plea of “not guilty” and also signed a waiver of extradition in order to train in Miami.

Taylor was 27-0-1 with 17 knockouts in September 2007 when he lost for the first time by seventh-round knockout to Kelly Pavlik. He also lost a unanimous decision to Pavlik in February 2008 and later suffered final-round stoppage losses against England’s Carl Froch and Germany’s Arthur Abraham in 2009. He remains the only man to have twice beaten Bernard Hopkins.