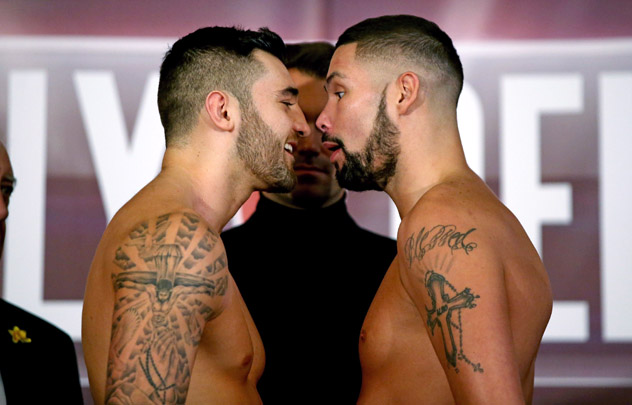 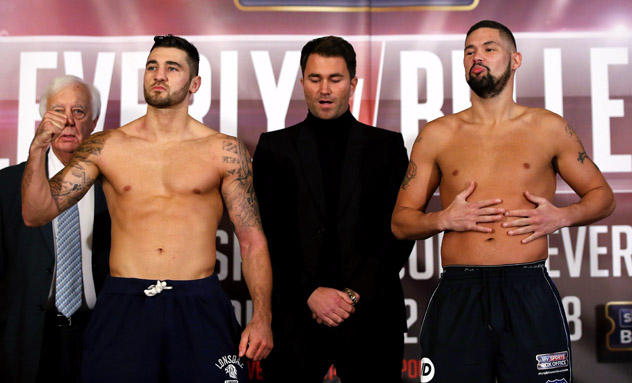 Nathan Cleverly and Tony Bellew weighed 199 pounds each in advance of Saturday’s cruiserweight rematch to take place at Echo Arena in Bellew’s hometown of Liverpool, England.

Since rising into the cruiserweight division, Welshman Cleverly (28-1, 14 knockouts) has registered knockout victories over Shawn Corbin in the second round and Alejandro Emilio Valori in the fourth in May and July, respectively.

With the wins, Cleverly, 27, rebounded from being dethroned as WBO light heavyweight titleholder in a fourth-round stoppage loss to Sergey Kovalev in Aug. 2013.

Bellew (22-2-1, 14 KOs) is 6-1-1 with four knockouts since losing by majority decision to then-titleholder Cleverly in a light heavyweight clash in October 2011 at Echo Arena.

His last fight at 175 pounds was a defeat by sixth-round stoppage to RING light heavyweight champion Adonis Stevenson last November, but since moving to cruiserweight, Bellew, 31, has scored knockouts over Valery Brudov and Julio Cesar Dos Santos.

For other fights, RING No. 3-rated junior featherweight Scott Quigg and Hidenori Otake of Japan weighed 121 pounds each, RING No. 9-rated bantamweight Jamie McDonnell and Javier Chacon came in at 117 pounds apiece, and heavyweight Anthony Joshua, a 2012 Olympic gold medalist, weighed 240 to 243 for rival Michael Sprott.

Also in action will be RING No. 5-rated super middleweight James DeGale against Marco Antonio Periban, and RING No. 4-rated 168-pounder George Groves against Denis Douglin. Both Periban and Douglin intially came in over and returned an hour later to make weight.

DeGale and Groves were reportedly involved in a confrontation backstage.

For yet another fight, undefeated welterweight Bradley Saunders and rival Ivans Levickis weighed 147, and, 143, respectively.