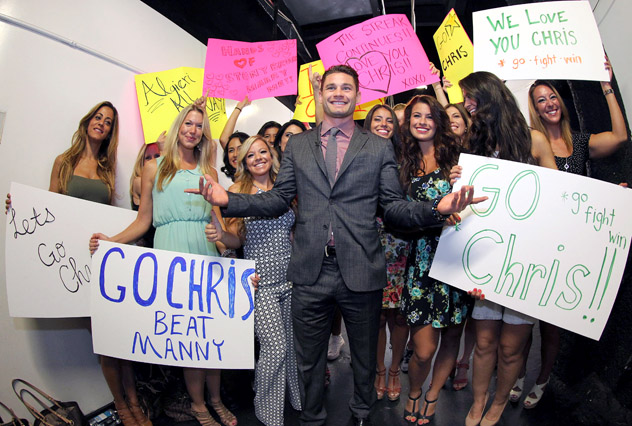 A major difference between Chris Algieri’s style and that of Floyd Mayweather Jr. is “I throw a lot more punches than Floyd,” said the WBO junior welterweight titlist during a Tuesday conference call in advance of his Nov. 22 clash with Manny Pacquiao.

“[Mayweather]’s very efficient with his punches and when he throws, he lands a very high percentage. But he’s not exceptionally busy every round,” said Algieri, who will challenge Pacquiao for his WBO welterweight belt at a catchweight of 144 pounds.

“I think I bring a lot of energy and combinations and punches every single round. Even when I’m not throwing, I am moving my upper body. I’m moving my feet. I’m moving my head; I am changing levels – all those things are important and they count and they are a part of boxing.”

Algieri (20-0, 8 knockouts) believes his skills, height and work rate will be the difference in defeating Pacquiao (56-5-2, 38 KOs). He also claims to never have had a problem with any of the previous southpaws he has faced during his career.

The activity level is “kind of a lost art because it is difficult to teach,” said Algieri, who stands nearly four inches taller than Pacquiao at 5-foot-11. “Unless you are an educated fan or a trainer or a fighter, you don’t even see those kinds of things. I’m bringing some of the finer elements of the sport to the ring.”

Algieri’s heart and resourcefulness were the difference in his last fight in June, a split-decision that dethroned Ruslan Provodnikov for his junior welterweight belt. Algieri survived two first-round knockdowns, a bloody nose and a right eye that was nearly closed shut to defeat Provodnikov.

A former kickboxer, Algieri, 30, cites legendary fighters as having influenced his approach to the sport.

“Bernard Hopkins’ style is the way. Everything he does is for a reason. The little head feints, little hand movements, little shoulder rolls and gestures are all finer points of the ‘Sweet Science,'” said Algieri.

“Before contemporary times, everyone did that kind of stuff. I have seen videos of Sugar Ray Robinson and Willie Pep who did a million other things than just punch to set up a perfect shot or to offset their opponents’ rhythm. Boxing is incredibly complicated. It’s not Rock’Em Sock’Em Robots.”

Pacquiao, 35, was last in action in April when he dethroned Tim Bradley by unanimous decision to regain the belt he lost to Bradley in June 2012.

Come fight time, Algieri insists he won’t be intimidated by the atmosphere at the Cotai Arena at the Venetian Macao, site of Pacquiao’s victory over Brandon Rios in November of last year.

“The press conferences and everything leading up to this fight have been kind of like a dress rehearsal for the big show,” said Algieri.

“All the attention and being under a microscope for the past five months, I think that’s prepared me well. But I guess we won’t know until that night.”

Algieri said that he won’t compromise his approach for the benefit of entertaining the audience with a toe-to-toe affair as much as try to neutralize Pacquiao’s speed with well-timed counters.

“I’ll box but I have never heard anyone say that I was a boring fighter or that they didn’t really like watching my style. I use a lot of the sweet science as they say but that sort of stuff is exciting to watch. I throw a lot of punches,” said Algieri, who unanimously decisioned Emmanuel Taylor in February before facing Provodnikov.

“I am an active fighter. All of my fights have been exciting, even the lopsided ones. I am not concerned about taking a conscious approach to making my style more exciting. I think I go out there and fight in the manner that works best for me getting a win and it just so happens that it’s good to watch.”

Note: Algieri claims to have outshined Pacquiao in four other ways during their promotional press tour.

“We played pool; we bowled, then we had batting practice, then we went to ESPN Deportes. They had a basketball shooting game, ‘Pop-a-Shot,'” said Algieri.

Did Algieri win all four outings?