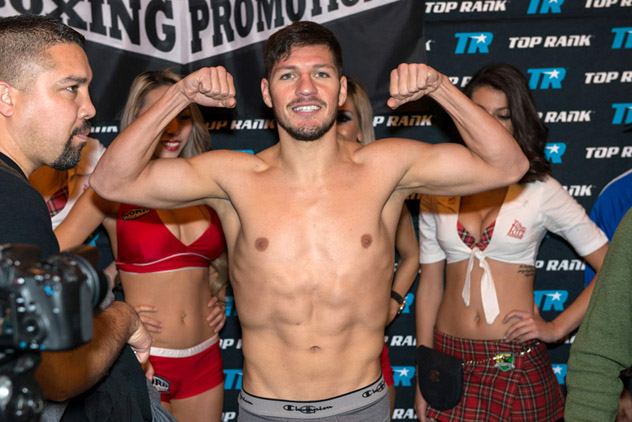 Diego Magdaleno predicted he would stop opponent Hevinison Herrera in the first round during the pre-fight interview to “Solo Boxeo Tecate” headliner televised on UniMas.

He ended up being off by two rounds.

Magdaleno knocked out Herrera in Round 3 of a 10-round lightweight bout at the Events Center in Pharr, Texas on Saturday.

The southpaw went on the attack from the opening bell, putting Herrera on the defensive. Magdaleno rarely threw a jab, landing with lead hooks and crosses.

Herrera switched from conventional to southpaw at the start of the third round and tried to counter Magdaleno’s offense. The change did little to thwart Magdaleno, who continued to punish Herrera.

After the midway point of the round, Magdaleno dropped Herrera with a straight left, right hook to the head. Herrera got up and tried to rally from the knockdown. With about 20 seconds left in the round, Magdaleno land a looping right hook that dropped Herrera to one knee. Herrera remained on the canvas as referee Lee Rogers counted him out at 2:53.

After the fight, Magdaleno said he was ready to fight for a world title. Colombia-born Herrera drops to 17-10-1, 11 KOs.

In other televised bouts:

– Opening the UniMas broadcast, junior middleweight John Vera (7-0, 3 KOs) won a six round majority decision over Alberto Robles (3-0, 1 KO). One judge scored the bout 57-57, while the other two judges scored the bout 58-56 in favor of Vera.

– Junior lightweight Luis Castro (6-1, 4 KOs) dropped Eduardo Garza (1-1, 1 KO) in the first round on his way to a unanimous decision over four rounds. Garza rallied late in the fight, but lost 39-36 on all three judges’ scorecards.

Fernando Montiel won a 10-round unanimous decision over Sergio Puente at Gimnasio Nuevo Leon in Monterrey, Mexico on Saturday night.

Montiel dropped Puente midway through the second round with a left hook to the body. Montiel went right at Puente when action resumed, but was not able to catch Puente flush again.

Puente, from nearby Guadalupe, was game and was able to connect at times against Montiel. But the world title holder in three weight classes was too much for Puente, using his experience to beat his rival to the punch.

In a 10-round bout that was fought at 143 pounds, Jose Zepeda (21-0, 18 KOs) knocked out former world title challenger Victor Manuel Cayo in the first round.

From a southpaw stance, Zepeda dropped Cayo with a left hand to the head. Cayo (32-6, 23 KOs) struggled to get up and was not able to beat the count at 1:27.

Mayfield rebounds with a win

Mayfield (19-2-1, 11 KOs), who had lost back-to-back fights against Thomas Dulorme and Emmanuel Taylor, landed the more-telling blows throughout the fight. He almost dropped Balasi (10-6, 7 KOs) near the end of the eighth round.

Also on the card, welterweight prospect Levan Ghvamichava (13-1-1, 10 KOs) survived a first round knockdown to knock out Jonathan Garcia (15-1, 11 KOs) in the second round.