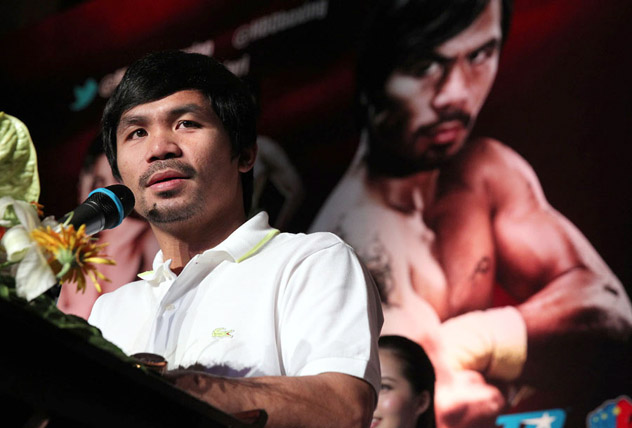 Although Manny Pacquiao claims to desire a fight with Floyd Mayweather Jr. before he retires, Top Rank Promotions CEO Bob Arum asserts Mayweather “is reluctant to fight” the Filipino star.

“How can I talk for Mayweather? As far as the Pacquiao fight is concerned with Mayweather,” said Arum during an international conference call with media members on Tuesday, “as much as a lot of people surrounding that would want it to happen, myself included and Manny included, Floyd Mayweather is reluctant to fight Manny Pacquiao. Period. If people don’t see that by now, they’re never gonna see it.”

Arum’s comments were made in advance of Pacquiao’s Nov. 22 defense of his WBO welterweight belt in Macau, China against Chris Algieri, who is contractually obligated to a return bout should he defeat Pacquiao.

Pacquiao (56-5-2, 38 knockouts) is 2-2 in his past four fights, including a loss by disputed split decision against Tim Bradley in June 2012 and another by sixth-round stoppage against Juan Manuel Marquez in December 2012. In his last fight in April, Pacquiao, 35, regained the WBO welterweight title by a unanimous decision over Bradley.

THE RING’s No. 1 pound-for-pound fighter as well as its champion at welterweight and junior middleweight, Mayweather (47-0, 26 KOs) is coming off consecutive victories over Marcos Maidana by majority decision in May and unanimous decision in September. Mayweather also holds the WBA and WBC titles at 147 and 154 pounds.

In his last fight in June, Algieri (20-0, 8 KOs) took Ruslan Provodnikov’s WBO 140-pound belt by a split decision,overcoming three first-round knockdowns as well as a a right eye that was nearly closed shut in that bout.

A 30-year-old from Long Island, New York, who is promoted by Joe DeGuardia of Star Boxing, Algieri will challenge Pacquiao at a 144-pound catchweight in his first professional appearance on foreign soil.

“As far as if Chris Algieri wins the fight from Manny Pacquiao, then there is a provision in the contract for a rematch,” said Arum. “And if he then beats Pacquiao and beats Manny in a rematch and Floyd wants to fight [Algieri], that’s not my business. That’s up to Joe DeGuardia, and it’s up to the Mayweather camp.”