Drian Francisco returns with decision win in the Philippines 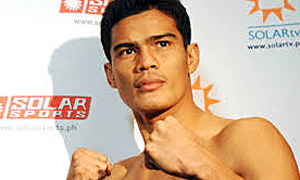 The 31-year-old Francisco, a native of the Philippine province of Mindoro Occidental, was fighting in his homeland for the first time in over two years, having relocated to Los Angeles to train under Justin Fortune.

Francisco, who says he only trained for a month for this fight, had been training alongside Manny Pacquiao in General Santos City, where Fortune has been working as a conditioning coach.

“This is a big test for me. I wish maybe next year I will be ready [for a title shot],” Francisco tells RingTV.

The win was Francisco’s second straight since losing a decision to Chris Avalos in July of 2013, which prompted him to move back down to 118 from 122.

Apolinario, 24, loses his third straight fight. Apolinario had drawn twice with Roberto Vasquez in vies for the interim WBA 118 pound title before losing a decision to Koki Kameda for the outright title in July of 2013. Afterwards he lost a decision to former flyweight titleholder Hernan Marquez in April of this year.

Hooper (9-1, 8 knockouts) was hit on the temple by a right hand from Powdrill (4-1, 1 KO) over a lazy left jab, falling face-first for the ten count. Hooper, 22, didn’t medal at the 2012 Games but eliminated currently unbeaten prospect Marcus Browne before losing to eventual gold medalist Egor Mekhontsev.