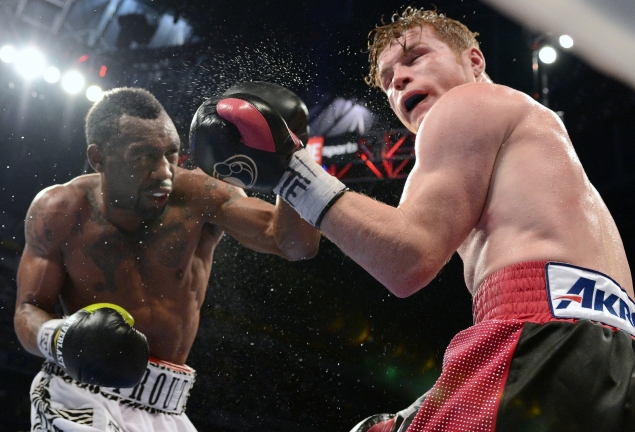 Austin Trout, Chris Arreola and Antonio Tarver could appear in separate bouts on a Dec. 11 card at the Pechanga Resort and Casino in Temecula, Calif., matchmaker Tom Brown of Goossen Promotions confirmed on Wednesday.

Trout (27-2, 14 knockouts) said he signed on Monday to face junior middleweight Luis Grajeda (17-3-2, 13 KOs) in a headliner for a show whose other bouts could place Arreola and Antonio Tarver in separate heavyweight fights against opponents to be determined.

Plans also include a junior featherweight match-up between Oscar Escandon and Tyson Cave, according to Brown.

“We’re trying to confirm Arreola plus the Tarver fight but nothing is 100 percent right now for those two,” said Brown. “There’s also a good possibility that we could have a 122-pound interim fight on here too. We’re trying to pull those off and there are some other options that we’re playing around with right now.”

“I’m sure that for Dan, he’s still happy that we’re moving forward,” said Brown, Goossen’s brother-in-law. “That’s what he would want and that’s what he would expect. We’re really close to wrapping up some things. We’re working on it right now.”

Trout has gone 2-2 over the course of his past four fights. In his last bout in August at the Pechanga, Trout rose from a third-round knockdown and floored his rival in the eighth of a 10-round unanimous decision over Daniel Dawson.

“I got caught with a nice shot and the reason why is that I was trying to lean in too much with my left hand,” said Trout, 29. “But we were kind of rusty but it’s going to be a different fight and a different level of focus this time.”

Grajeda, 27, has gone 3-2-1, with three knockouts over the course of his past six fights and was last in the ring for a unanimous decision loss to Willie Nelson in August.

“I’m sure that he’s ready to take this opportunity and to make the most of it but I cannot let that happen. I’m just ready to get back into the ring,” said Trout, who ended an eight-month ring absence against Dawson.

“I know that he fought Willie Nelson and that he had a really good fight with him but we just signed the contract on Monday, so now that I’ve got a name and an opponent, I’m going to start doing my research on him.”

Trout said he has been training in Washington, D.C. at the same gym as IBF junior welterweight titleholder Lamont Peterson, where he is awaiting trainer Louie Burke.

“I’ve only been here a few days and the gym atmosphere is very good. Everybody in there is really good. They don’t really allow any sub-par guys in there,” said Trout. “I understand that Adrien Broner is coming out in a couple of weeks, so that means that there is even more talent that’s going to be around. They keep their circle tight and I really like that.”

Before facing Alvarez and Lara, Trout scored had a career-best unanimous decision over Miguel Cotto in December 2012 at New York’s Madison Square Garden.

“We’re going to be fighting at 154 plus or minus two pounds. I feel good at this weight and I feel good making it. I don’t see any reason to go up unless I get an opportunity of course,” said Trout, who is advised by Al Haymon.

“The 154-pound weight class is still very much wide open. I’m going to focus on Luis and getting rid of this guy and then, maybe next year, I’m hoping to jump in and get a title shot at some point.”

A two-time title challenger, Arreola, 33, has gone 1-2 in his past three fights. In succession, Arreola lost by unanimous decision to Bermane Stiverne in April 2013, stopped Seth Mitchell in the first round in Sept. 2013 and was knocked out by Stiverne in the sixth round of their rematch for the vacant WBC title in May.

A former light heavyweight champion, Tarver, 45, has returned to training after having suffered a fractured thumb on his left hand that forced him to pull out of a Sept. 29 bout against Johnathon Banks. A 1996 Olympic bronze medalist, Tarver’s most recent fight was a fourth-round stoppage of Mike Sheppard last November that ended a 17-month ring absence.

Escondon is coming off a sixth-round knockout of Julian Evaristo Aristule in August to rebound from a split decision loss to Nehomar Cermeno in August 2013. The loss to Cermeno ended a run of three consecutive stoppage wins by Escondon, 30.

Cave, 32, has won nine consecutive fights, three by knockout, since falling by technical decision to AJ Banal in July 2011. Cave was last in action for a unanimous decision over Sebastien Gauthier in April.