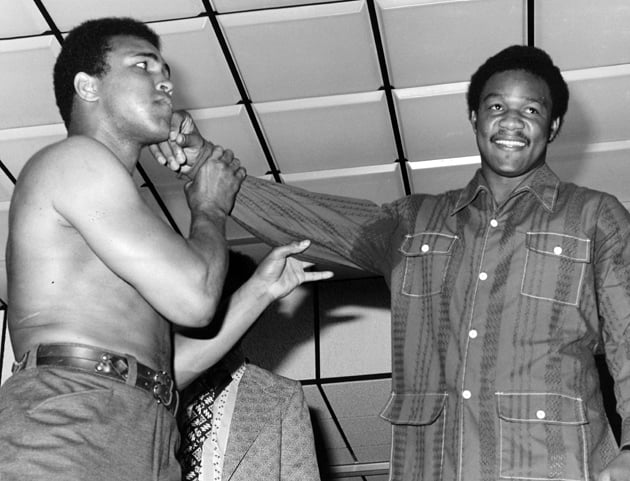 For fight fans “The Rumble in the Jungle” is the most famous of boxing fairy tales. Muhammad Ali, the divine sorcerer, slaying the monster man and regaining all that was lost in a mystical heavyweight title bout staged in Zaire, Africa, on Oct. 30, 1974.

George Foreman had butchered all 40 of his previous opponents, 37 inside the distance, and carried the “invincible” tag from the moment he punched Joe Frazier off his feet. The 25-year-old champion entered the ring against Ali as a huge favorite, but was spectacularly knocked out in eight rounds and buckled into a state of depression and despair.

After a period of convalescing a rematch was top of the agenda for Foreman. The hard-hitting Texan wanted to prove that the Ali magic was an illusion and, habitually, his tormentor loved an encore. At the time Ali had fought rematches against Henry Cooper, Sonny Liston, Floyd Patterson, Jerry Quarry, George Chuvalo, Frazier and Ken Norton.

That pattern was about to change.

“Ali called me at home in California, just prior to my fight with Ron Lyle,” Foreman, who took 15 months off following the defeat, told RingTV.com. “He said I hear you want a rematch and that’s fine, but you must re-hire Dick Sadler as trainer. I said that Sadler would never work my corner again and Ali responded, angrily, by saying there would be no rematch.”

Dick Sadler had an undistinguished run as a professional lightweight, in the 1940s, before turning his hand to training fighters. In January 1973, under Sadler’s guidance, Foreman knocked out Frazier in two rounds, for the championship, and also brought an equally brutal conclusion to a title defense against Ken Norton a year later.

Foreman and Sadler, with former light heavyweight legend Archie Moore in an advisory role, seemed like an unbeatable team until Zaire changed everything. In a controversial 1995 biography, entitled By George, the Hall of Fame heavyweight alleged that Sadler exhibited strange behavior prior to, and during, The Rumble in the Jungle.

Foreman said, “In the Ali fight Dick Sadler was the chief second. Every round he was telling me to attack, attack, attack. He was slapping my leg in the corner, urging me to get him, telling me I had Ali hurt. Not once did he ask me to stop and let Ali bring the fight to me. I was the champion that night, but it was as though he was burning me out on purpose.”

Foreman also claimed that Sadler borrowed $25,000 from him to bribe referee Zach Clayton. The trainer allegedly said this was to dissuade the official from disqualifying Foreman for striking Ali while he was down. The young champion had been guilty of that particular infringement in prior fights and went along with it. Sadler and Clayton, both deceased, always denied participation in these events.

Despite the cloak and dagger nature of these stories it is interesting to see Sadler turn up as part of the Muhammad Ali entourage, during trilogy bouts with Frazier and Norton, in the years that followed. Regardless, in early 1976 Sadler and Foreman were no more and Gil Clancy, former trainer of Emile Griffith and Ken Buchanan, stepped in.

“I had watched Gil Clancy work hundreds of rounds with Griffith, who was a 15-round specialist,” said Foreman, with admiration. “Griffith would win some and lose some but he would always be fresh at the beginning of every round. I needed someone who could come in and talk to me about finishing well in a fight. If I didn’t get the knockout, Gil would be there to see me through and he had a proven record of doing that.

“Gil and I met in San Francisco and we discussed the Ali fight. He went over my short comings and I felt we were the perfect match. Gil helped me pace myself and that was beneficial for my stamina and endurance. Ron Lyle had me down twice, but at the start of each round I was ready to go and I won that fight. Gil was terrific in the gym, but he also got into my head between rounds and that was vital.”

Foreman continued, “I asked Gil if he thought I could beat Ali and he said yes, that I had only beaten myself in Africa. Gil was never a boxer but he knew how to get your attention and his confidence in fighters never wavered. There’s a language that a trainer uses in the corner and if they don’t know how to speak it then fighters can go down the drain. Gil knew what to say and when to say it.”

Ali had endured terrific body punishment in Africa and there were rumors that the new champion urinated blood in the dressing room following the bout. Foreman was THE RING Fighter of the Year in 1976, having knocked out Ron Lyle and Joe Frazier within five rounds, and he seemed as menacing as ever. When this reporter ventured to suggest that Ali may have avoided a rematch, Foreman instantly disagreed.

“Ali was the bravest man I ever shared the ring with and it all came down to the issue we had with Dick Sadler,” said Foreman, before marginally contradicting that statement. “Strange things can happen in boxing matches, that fighters never mention, and I may have caught him with one punch that he wasn’t willing to take again.

“A really heavy body shot bent Ali over at the waist and it was obvious he was hurt. When the bell rang to end that particular round he gave me a look and I remember thinking to myself, this is the bravest man I’ve ever faced. Despite chasing the rematch I asked myself, many times, if I truly wanted to get back in the ring with him.

“If Ali was a touch scared of fighting me again – I was glad of it.”

With no return fight in the offing, Foreman took on the light hitting Jimmy Young from Philadelphia in March 1977. Fighters who hail from The City of Brotherly Love were routinely aggressive, but Young was a defensive wizard who utilized sharp reflexes to offset Foreman’s charges before claiming a sensational decision victory in Puerto Rico.

In the dressing room Foreman experienced a well-documented spiritual awakening, which was the initial spark to a new career as an evangelist and, at 28 years of age, he retired from boxing. A Christian minister to this day, Foreman would embark on the most unlikely of boxing comebacks after a decade of bible thumping. 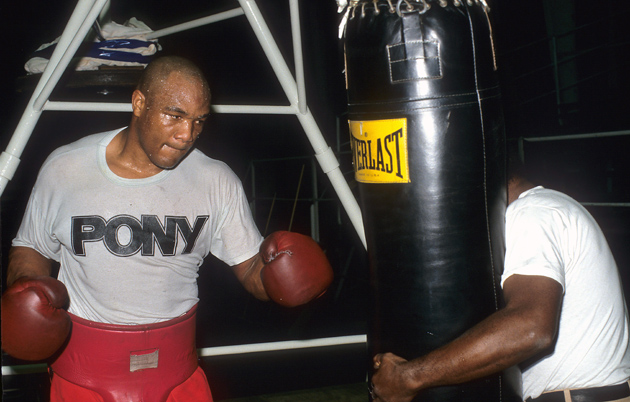 George Foreman woks the heavy bag during a media workout prior to announcing his comeback in February 1988. Photo by: The Ring Magazine/Getty Images

“I came back to lose weight and eventually increased my roadwork to 10 miles a day,” said Foreman, who focused diligently on developing stamina during his second coming. “I would train with five sparring partners and do two or three rounds with each of them. Every two or three rounds I have a fresh fighter in front of me. When you train like that your spirit becomes involved and you have complete confidence.

“Being in great physical shape transforms your mind. I had to train as hard as I could to be a 12-round fighter at that time. Nobody on earth could beat me between rounds one and three and most of my opponents simply prayed for me to get tired. That was pointless now, because I could fight harder in the second half of a fight and I’ll always be grateful to God for giving me the spirit and endurance to train like I did.

“Nobody could hurt me.”

Following two unsuccessful title challenges, against Evander Holyfield and Tommy Morrison, the unthinkable happened. On Nov. 5, 1994 Foreman, at least eight rounds behind against defending champion Michael Moorer, landed a pulverizing right hand to the chin which disconnected the younger man’s senses in the 10th round.

It had taken 20 years for Foreman to reclaim the crown and vindication was his.

“I wouldn’t change a thing in my career and it’s been a wonderful life,” said Foreman who, at 45 years old, became the oldest heavyweight champion in history. “In 1994 I was on my knees in Las Vegas thanking God and, at that moment, I didn’t want to be anyone else in the world. I was so happy and it was like a big mystery with people asking if I was really the same guy who lost to Ali.

“I cherish The Rumble in the Jungle and have done for years. I’m so happy that you can’t mention Muhammad Ali without mentioning George Foreman. The fight wasn’t just big in America, it was a global event. In the ’70s people took that for granted, but when you look back you realize how special it was. It will be remembered forever and I’m so happy that I was part of it.

“My kids and my grand kids laugh at Ali’s antics back then and I can join in.”

And what if the fantasy fuelled rematch had taken place? Let’s say Ali and Foreman collided in the summer of 1976 at Madison Square Garden in New York. Tickets for “The Rumble in the Concrete Jungle” sell out in hours and Foreman claims to be resurrected as Ali enters a slow decline.

“Gil Clancy talked strategy on an Ali rematch more than once,” said Foreman, with a deep sigh. “We would have approached it like a distance fight. You go out and win three rounds, then coast by holding back your punches, then you up the pace again. After you get your second wind you can close aggressively. I would have paced myself but kept my big punches in store for when needed.

“Being honest, that is what I would have done but knowing Ali he would have outfoxed me again. I wish I had been more observant at the time, but I ignored all the warning signs with this guy. I was in Madison Square Garden, on March 8, 1971, when Joe Frazier knocked Ali down and his legs flew up in the air. I turned to someone and said that’s the end of that and when I looked back Ali was on his feet.

“Doesn’t that tell you something about a human being? What a great fighter he was.”