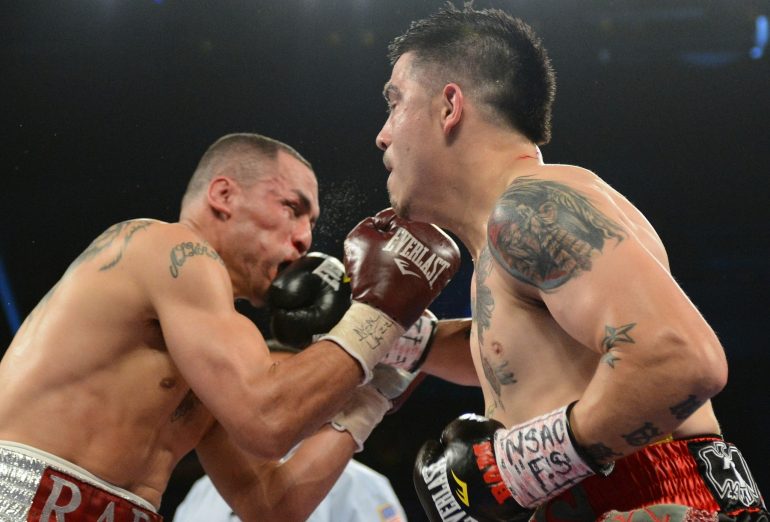 A third fight between Mike Alvarado and Brandon Rios could happen in December if not early next year, Top Rank Promotions CEO Bob Arum said on Wednesday.

Arum also said Alvarado-Rios III could be supported by a clash of southpaws matching Matt Korobov and Andy Lee for the WBO’s vacant middleweight belt, that is, if Korobov-Lee does not land on the undercard of a Dec. 13 fight matching two-division titlist Tim Bradley and Diego Chaves at the Cosmopolitan in Las Vegas.

A former lightweight titleholder, Rios (32-2-1, 23 knockouts), 28, is 2-2 in his past four fights. Rios is coming off a ninth-round disqualification victory over Diego Chaves in August to bounce back from a unanimous decision loss to Manny Pacquiao in his welterweight debut last November.

Prior to Pacquiao, Rios had split bouts with Alvarado (34-3, 23 KOs), stopping him in the seventh round in October 2012 but losing their rematch for the WBO’s vacant 140-pound belt by unanimous decision in March 2013.

After his second fight with Rios, Alvarado was dropped twice in the eighth of a 10th-round stoppage loss to Ruslan Provodnikov in October 2013 before swapping knockdowns with Juan Manuel Marquez en route to a unanimous decision loss in his last fight last May.

“We’re going to do Alvarado and Rios. We were planning on doing that next year but there is a possibility that they could do it this year,” said Arum. “We still don’t know. It’s in discussion. They don’t know if they want to do it that close to the end of the year. That’s up in the air.”

Arum reiterated that Korobov-Lee “is happening this year in December. That is for certain. The fighters have agreed and everyone has agreed to it.”