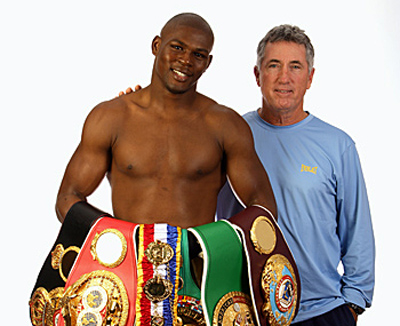 The trainer of Jermain Taylor has responded to a bizarre 20-second video circulating on the internet in which the former undisputed middleweight champion is shown firing a gun and saying “I’ll never lose to another white boy,” presumably in reference to his showdown with IBF beltholder Sam Soliman tonight.

Taylor (32-4-1, 20 knockouts) is challenging Soliman (44-11, 18 KOs), an Australia native of Egyptian descent, at Beau Rivage Resort and Casino in Biloxi, Mississippi. The bout will be televised live on ESPN in the U.S.

It is unclear how long ago the brief snippet, which is credited as a Taylor Facebook video on Youtube.com, was created. The video, which also includes the Arkansas native playing drums shirtless, created a minor buzz within the boxing community on social media this week, in part due to Taylor’s recent legal trouble in connection to a shooting and the “white boy” comment.

Burns, who guided Taylor to a middleweight title and a mark of 25-0 before being replaced in 2006 by the late Emanuel Steward, had gotten wind of the video, but had not seen it, when he spoke to RingTV.com on Wednesday.

“Everybody has their moments,” he said. “I’m sure that in hindsight, he might rephrase it or something like that. But, he did lose to a couple of white boys, so he doesn’t want to lose to another white boy. He said it, so what? Had I been next to him, before he said it, (I’d have said) ‘you don’t say things like that.’ Period. In general, you just don’t say things like that. It’s not right.

“But people will make those comments. There are a lot of people who think it’s a racist comment, because, I guarantee you, that if a white boy jumped up and said that ‘I’ll never lose to a black fighter again,’ that there are a lot of black people who will say that it was racist. But people are going to think what they want to think and they’re going to say what they want to say.”

In August, Taylor was arrested, jailed overnight in Little Rock, Ark., and then released on bail in connection with a shooting that wounded his cousin and missed another man in the fighter’s home near Maumelle, Ark. Taylor is facing charges for first degree domestic battery and aggravated assault.

Taylor was 27-0-1 with 17 knockouts in September 2007 when he lost for the first time by seventh-round knockout to Kelly Pavlik, who is a Caucasian American. Taylor later suffered final-round stoppage losses against England’s Carl Froch and Germany’s Arthur Abraham, the latter of whom is of Armenian descent, in April and October 2009.

“This country’s becoming too politically correct. It’s bulls__t. Say what’s on your mind, but just don’t be rude or disrespectful,” said Burns. “But just don’t walk on egg shells. People need to get over it. People are making more out of things than what it really is…I don’t see the big deal of it.”