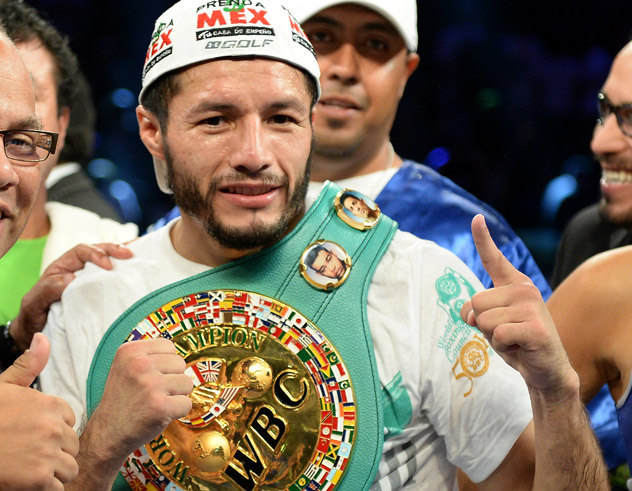 THE RING’s No. 1-rated featherweight Jhonny Gonzalez scored knockdowns in the third, fifth and ninth rounds of 11th-round stoppage of four-division titlewinner Jorge Arce on Saturday in Arce’s hometown of Los Mochis, Mexico.

Gonzalez (57-8, 48 knockouts), who turned 33 last month, has now scored 14 knockouts in his past 17 victories, and was coming off a 10th-round technical decision over previously unbeaten Clive Atwell in May.

The win over Arce represents the second defense of the WBC belt Gonzalez won by a shocking first-round knockout of previously unbeaten Abner Mares.

For Arce (64-8-2, 49 KOs), a streak of three straight knockouts ended, having previously been stopped in the third round by Nonito Donaire in December 2012.

A winner of major title belts in the junior flyweight, junior bantamweight, bantamweight and junior featherweight divisions, Arce, 35, had announced his retirement after the loss to Donaire only to return for an eighth-round stoppage of Jose Carmona last November that was followed by knockouts of Aldimar Silva Santos in the fifth round and Jorge Lacierva in the eighth.

In the co-feature, hammer-fisted featherweight Adrian Estrella (19-0, 17 KOs), 22, scored two knockdowns in the fifth round and knockdowns in the 10th and 11th on the way to a unanimous decision over two-division titlewinner Celestino Caballero (37-6, 24 KOs), a 38-year-old veteran who lost for the fourth time in seven fights.