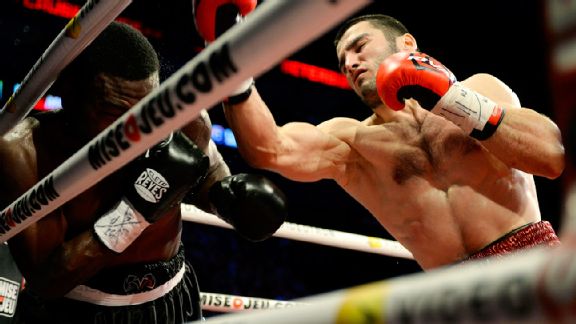 Beterbiev, 29, improved to 6-0 with as many knockouts, representing the third consecutive loss for Cloud (24-3, 19 KOs). The triumph at Bell Centre in Montreal was just the second over a fighter with a winning record for Beterbiev, who has yet to go beyond four rounds.

On Sunday, Beterbiev shared his thoughts on the fight with RingTV.com.

What is your overall assessment of the victory?

“I’m very happy about my performance. It was as easy as a walk in the park but I could have done a little better and there’s always room for improvement.”

How much of the result of this fight was a result of your talent and how much was it Cloud’s deterioration as a fighter?

“I believe that the preparation of Tavoris Cloud was great but once you miss a punch and you get hit with a solid punch, there is nothing you can do. But there is also the mental preparation. You have to be mentally prepared and I think that even though I got to him, physically, I got to him mentally too.

“It’s always a test of wills and whoever gets the upper hand first gets the priority in the ring. I think it comes down to intimidation. Once I was able to do that, I knew that I was going to win. Then, it becomes physical.

“It was very important for me to win the fight mentally first and then to show with my punches that I’m there to put him down. As far as his deterioration, I can’t comment on that. That’s up to the public to judge. I’m only responsible for myself.”

At what point did you have that mental advantage and ultimately complete control in the fight?

Why were you so successful landing the left hook?

“Cloud was placed in a position that made it comfortable for me to land the left hook. It was like he was asking for it. He was wide open on that side for the left hook.”

Is your intention to continue taking on other top contenders or former titleholders in your next few fights?

How far away do you believe you are from a title shot?

What statement do you think you sent to the critics of your competition level as well as to the rest of the division?

“It was a very big test for me and a lot of people, before the fight, they were criticizing. They were trying to put the blame on me that I was fighting only easy opponents. Now, I think that I’ve passed a big test.

“I hope that people enjoyed the show. Now I’m looking forward to facing better opponents…they know the message. Everyone knows the message that I sent. There is no need to say anything more about that.”