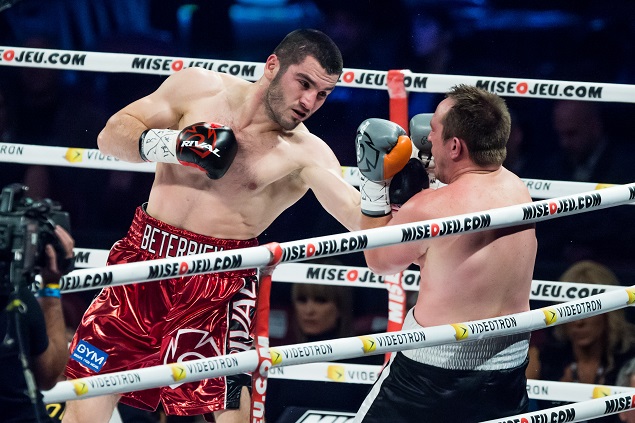 Russian light heavyweight Artur Beterbiev is confident of victory heading into Saturday’s bout with former IBF titleholder Tavoris Cloud, this despite having not gone beyond four rounds and facing only one boxer with a winning record.

The resident of Montreal, Canada, who is promoted by Yvon Michel, Beterbiev (5-0, 5 knockouts), 29, will face Cloud (24-2, 19 KOs) at Bell Centre in Montreal just over a month since his first round knockout of Alvaro Enriquez on Aug. 22.

The victory over Enriquez represented the second first round stoppage for Beterbiev, who also has one each in the second, third and fourth rounds. A third round knockout of Rayco Saunders, who entered their clash with a record of 23-20-2 and 10 knockouts in Sept. 2013, marks the only time Beterbiev faced a boxer with a record above .500.

Armed with the credibility of an amateur victory over WBO titleholder Sergey Kovalev, Beterbiev is motivated for the major step up in class represented by Cloud, 32, who appears to have deteriorated over the course of his past four appearances.

In his past two fights, Cloud was dethroned as IBF titleholder in a unanimous decision loss to Bernard Hopkins in March 2013 and stopped in the seventh round of his following bout by RING champion Adonis Stevenson in his last fight in Sept. 2013.

Prior to facing Hopkins and Stevenson, Cloud was trailing against Yusaf Mack before scoring an eighth round technical knockout in June 2011. Cloud won a disputed split decision in February 2012 over former beltholder Gabriel Campillo, who appeared to have outboxed Cloud after having been dropped twice in the first round.

“We are preparing for this fight the way that we always prepare for any particular opponents. Of course, we’re watching videos and we think that we’re ready but nobody has a crystal ball. We have seen the flaws of Tavoris Cloud and certain movements that he makes.

“But at the same time, we can not predict whether or not he will be making the same mistakes as he has in the past, you know. Nobody knows. I don’t think that we’re going to be ready to disclose this right now because we have a few possibilities regarding our fighting strategies.

On his experiences with Kovalev:

“We used to be on the same team in Russia, so it’s really hard to say how many times I beat him because being on the same team, there was a lot of sparring and a lot of training involved. So I fought him a few times but the most memorable was the championships in Russia when I beat him.

“As far as the credibility, all of us have the baggage. So of course, I can use Kovalev as credibility going against Tavoris Cloud. But any of my amateur experiences should count because that’s how I became the boxer that I am and that’s my experience.”

On the notion that he is stepping up too quickly versus Cloud relative to his professional inexperience:

“I’m very excited about fighting Tavoris Cloud because the opponents that I’ve previously had were too easy for me. So I like to take this as a challenge. I would like to use this opportunity to show to my fans that I can box and to show that I have movement because so far, I haven’t had that opportunity. So far all of my opponents have been too easy. I couldn’t show my true strength, power and movement.”

On the potential for a knockout victory:

“I am preparing myself for any scenario – any fight scenario. If it’s going to be a longer fight, then I’m going to be trying to save my energy. But also, with my physical preparation, I’m ready to use my power and to take it for a longer fight. It depends on what Cloud brings to the table.”