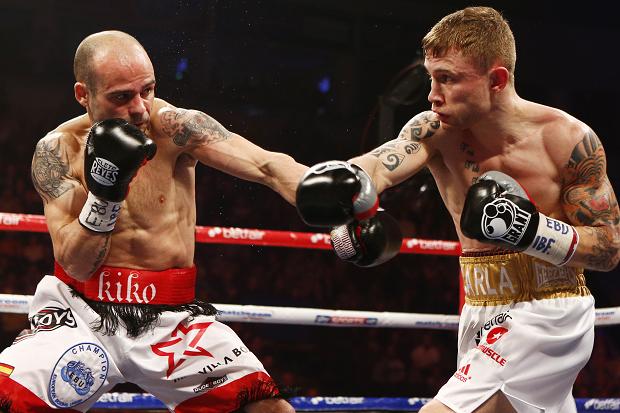 IBF junior featherweight titleholder Kiko Martinez will “prove that he is a better fighter,” his promoter, Sampson Lewkowicz said of Saturday’s rematch with Carl Frampton. Frampton handed Martinez his last loss by ninth round stoppage in February 2013.

However, few others agree.

“I don’t see why Carl Frampton-Kiko Martinez II will be much different from the original,” states RingTV.com’s Michael Rosenthal of Frampton-Martinez I, which took place at the Odyssey Arena in Belfast, Northern Ireland. Their return bout is slated for the Titanic Quarter in Belfast.

“Martinez clearly bounced back nicely after he was stopped by Frampton in February 2013. I think Martinez will make Frampton work very hard – and perhaps hurt him once or twice…”

In his last fight in April, Frampton, 27, scored his fourth straight stoppage, doing so in the second round against Hugo Fidel Cazares.

Martinez will be in pursuit of his fifth straight knockout win in his third defense against Frampton and is coming off a seventh round technical knockout over ex-titleholder Hozumi Hasegawa in April in Japan.

RingTV.com compiled the opinions of 16 insiders regarding what they expect to transpire in Martinez-Frampton II.

Carl Frampton TKO 11 Kiko Martinez: Quite possible the very best match-up in a loaded fight weekend. I like Kiko Martinez to offer a more competitive fight this time around with the bout fought on even terms before Carl Frampton rallies for a dramatic late-rounds stoppage. A bit deeper than the first but with a similar result.

There’s a chance that Martinez won’t last much longer than a pint of Guinness at the corner pub. But the first fight is reason for Martinez to proceed with caution.

Martinez is skilled enough to deal with Frampton’s fast hands but Frampton has displayed a good chin and his power is emerging. Both promise to score a punishing victory on the cards.

Carl Frampton KO 3 Kiko Martinez: In rematches of fights that end by conclusive stoppage, it’s usually a good bet to happen again and sooner. Meat gets tenderized and so do badly-beaten boxers.

My prediction is that Carl Frampton picks up right where he left off at home, hurts Kiko Martinez to the body early, then attacks wounded prey. Northern Ireland’s hungry “Jackal” will finish off the gritty Spaniard with a punching display akin to a predatory kill.

All the talk now will be on territorial battles against either Golden Boy’s Leo Santa Cruz or Top Rank’s Cuban “Jackal” Guillermo Rigondeaux.

Carl Frampton UD 12 Kiko Martinez: In their first bout, Carl Frampton was forced to earn his successes on route to a spectacular one-punch knockout in round nine.

Still, despite that conclusive ending, Kiko Martinez had kept “The Jackal” on the back foot for most of the contest and was only a touch behind when the Belfast man lowered the boom.

This time around, Martinez will be energized to gain revenge, retain his world title and make a mockery of the landslide odds in Frampton’s favor.

I think that type of motivation keeps the game Spaniard in the bout until the final bell but in all honesty, Frampton is just the better fighter and will prevail via comfortable points decision.

Carl Frampton UD 12 Kiko Martinez: I like Carl Frampton to defend his home turf successfully although Kiko Martinez will likely apply what he learned in the first bout to steer clear of any unnecessary exchanges that could result in a second stoppage loss.

But I still think Frampton’s left hook will continue to do enough damage to win rounds and even stagger the Spaniard enough to go two-for-two in Belfast.

Carl Frampton KO 5 Kiko Martinez: This fight should be action-packed as long as it lasts. Kiko Martinez is plenty heavy-handed, so he has a chance in any fight he’s in.

Martinez has KO’ed four straight guys since he last met Carl Frampton, so any psychological damage from that first bout should be gone. However, the styles favor Frampton.

He’s clever, won’t just stand in front of Kiko and hits hard himself. He’ll make Martinez chase him and make him pay when he misses. That, plus a big edge in hometown backing will give Frampton the win in the first half of the fight.

Carl Frampton W 12 Kiko Martinez: I never predicted a draw and I don’t think it will happen this time but if anything, this fight will be even more of a toss-up than the first one.

Knowing each other like they do, my bet is that they both will double down on whatever worked best for them the first time around – speed and volume for Carl Frampton, bull-rushing, two-fisted attack for Kiko Martinez – and the final outcome could easily go either way.

If Martinez is at his 100 percent best – he claims he wasn’t the first time around – he has a chance to turn this around and set up a terrific rubber match. Otherwise, I am expecting a solid, workmanlike, very close decision for Frampton.

Martinez has rebounded nicely since being stopped by Frampton last year. He’s won four straight fights by knockout. Frampton is undefeated in 18 bouts with 13 of those wins inside the distance.

Martinez wants revenge but this is a matter of one fighter, Frampton, being a little more talented. I see Frampton flooring Martinez and winning the rematch by unanimous decision.

Carl Frampton KO Kiko Martinez: Their first fight was more competitive than might be recalled. That’s the power of a one-punch knockout, Carl Frampton’s right hand making clear who the better man was that night.

Both men are improved over what they were a year ago and that means we should get another good fight. We should also get a similar outcome. With Northern Ireland behind him, Frampton stops Kiko Martinez again to win his first major title.

Carl Frampton UD 12 Kiko Martinez: I don’t see why Carl Frampton-Kiko Martinez II will be much different from the original, although Martinez clearly bounced back nicely after he was stopped by Frampton in February 2013.

I think Martinez will make Frampton work very hard – and perhaps hurt him once or twice – but I believe the more talented Irishman, fighting in front of his hometown fans, will either score another late KO or more likely win a unanimous decision.

Carl Frampton KO 8 Kiko Martinez: Carl Frampton is a rising star fighting in his home town of Belfast. He’s already stopped Kiko Martinez once in the ninth round. He makes it quicker this time with an eighth round KO.

Carl Frampton KO 8 Kiko Martinez: This match-up is the kind I like: a stalking grinder with power versus a slick boxer/puncher with equal or slightly better power.

Kiko Martinez wants the public to believe that he wasn’t 100 percent for their first meeting but I call bulls–t on that one. Carl Frampton is the better fighter and the Spaniard knows it. “The Jackal” wins by KO in the later rounds of an exciting back-and-forth fight, much like their first encounter.

It should have been the other way around for Frampton, who will be facing a different fighter who has more confidence and more will to win in their rematch. Will that be enough for Martinez? Unfortunately, no. Martinez’s title reign will end inside of 10 rounds.

Martinez was able to rough up Frampton and make it a genuine fight in the middle rounds but then the ninth round happened and Frampton dropped a short right on Martinez that ended the fight. Since then, Frampton has had a couple nice fights while Martinez has managed to earn the IBF title belt and defend it twice.

This should be another fun fight but don’t expect the script to flip the second time around. Look for Frampton to remain composed as he did the first time and stop Martinez around the eighth round.

Carl Frampton TKO 10 Kiko Martinez: These two met early last year in what was a very entertaining fight that Carl Frampton got just the better of before scoring an impressive stoppage.

Full credit to Kiko Martinez, who rebounded to win a world title and has made two successful defenses and now heads back to Belfast seeking revenge. Since they last fought, Frampton has stayed active but has until now been able to get his much desired world title fight.

What you see is what you get with Martinez. He’ll look to pressure Frampton and push him back and beat down on him. Though Martinez will have his successes, I see Frampton again edging the action, getting off the better work and getting a late stoppage in a grueling action bout.

By the resounding shutout of 16-0, the insiders have chosen Carl Frampton to yet again defeat Kiko Martinez, this time for the IBF’s junior featherweight belt.