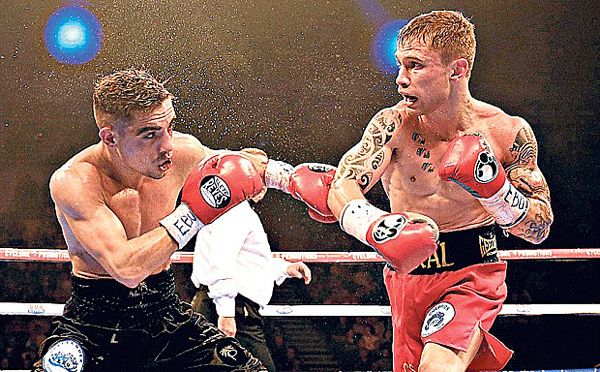 There is a wall in the McGuigan Gym in Battersea with the autographs of some of the greats of world boxing on it: Mike Tyson, Sugar Ray Leonard, Joe Calzaghe.

When Saturday comes, Carl Frampton, the precise, pugnacious fighter from Northern Ireland, aims to add his name to that list of revered prizefighters.

The unbeaten 28-year-old challenges for the International Boxing Federation super-bantamweight world crown against Kiko Martinez in the Titanic Dockyards, in Belfast, less than a mile from where he grew up, in front of a sell-out 16,000 audience. There could be no greater setting for his coronation, and he can ill afford to be sunk by the Spaniard.

The wall is a centrepiece of the gym, in an old loading bay in swanky Battersea, a long way from home. “It’s a small gym, so you can pretty much see it from everywhere. I intend to be the next one on it. It’ll make me realise that I’m a world champion every time I see my name up there. I’m sharing a piece of the wall with some great fighters.”

It is an intriguing location, a stone’s throw from The Royal College of Art: not exactly the spit and sawdust gyms of boxing folklore. “We’ve got Vivienne Westwood’s studio directly opposite, and we share a complex with Sam De Fleur and Victoria Beckham and stuff,” explained Frampton, who is more about hit than hip.

He has already been crowned British, Commonwealth and European super-bantamweight champion after 18 contests, and, peculiarly, has already beaten Martinez, in a scintillating display in Feb 2013. He stopped the Spaniard by crunching ninth round TKO defeat, the only stoppage in his 35-fight career. Now they meet again, with Martinez having claimed a world crown in between times.

Click here to read the full story by Gareth A Davies, sports writer for The Daily Telegraph/Telegraph Media Group.