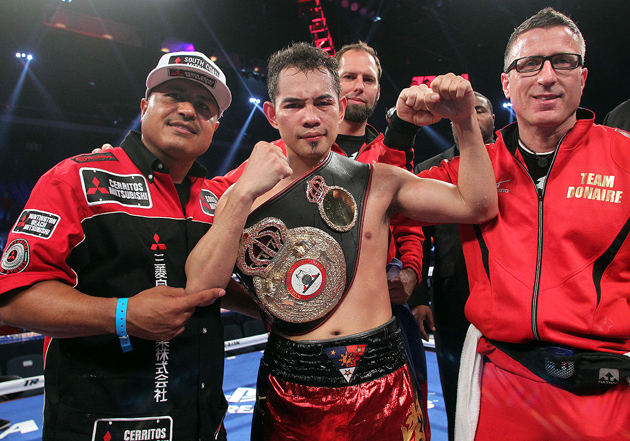 Tom Loeffler of K2 Promotions, which handles Golovkin, said on Wednesday that Donaire-Walters “just got confirmed this afternoon.

“We wanted to make the best fight possible for this show,” Loeffler said of Donaire and Walters, who are promoted by Top Rank, “even if it didn’t involved our fighters.”

In his last fight in May, the 31-year-old Donaire scored a fifth-round technical decision that dethroned Simpiwe Vetyeka as WBA beltholder at The Venetian Macao in Macau, China.

Donaire, who won his seventh major title in a fourth weight class, scored a knockdown in Round 4 and survived headbutts and poor officiating by referee Luis Pabon.

The fight went to the judges’ scorecards after Pabon halted the fight with Donaire badly cut over his left eye, the result of an apparent headbutt. Donaire also took a knee in Round 1 after suffering the cut and absorbing a shot to the back of the head. Donaire won by unanimous scores of 39-36 on the cards of judges Raul Caiz Jr., Francisco Martinez and Levi Martinez.

On the Donaire-Vetyeka undercard, the 28-year-old Walters thoroughly dominated two-division titleholder Vic Darchinyan on the way to a fifth-round stoppage, flooring the 38-year-old veteran once in the second round and twice in Round 5.

In the HBO-televised main event on Oct. 18, Golovkin will pursue the 12th defense of his WBA belt and his 18th straight knockout victory against Rubio (59-6-1, 51 KOs), a winner of six straight fights, five of them by knockout, since falling by unanimous decision to Julio Cesar Chavez Jr. in February 2012.

Perez, 24, is 5-0-1 with one knockout since, himself, being stopped in the sixth round by Omar Figueroa in January 2012. Perez is coming off a unanimous decision over Jorge Romero in April.

Robinson, 31, is coming off last month’s second-round stoppage of Andre Baker to rebound from a fourth-round knockout loss to Amir Imam in February.