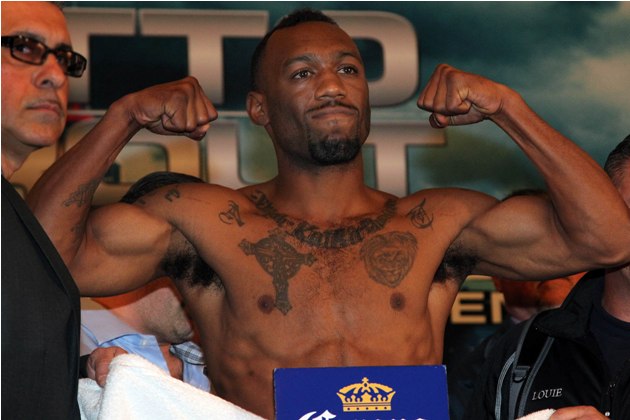 TEMECULA, Calif. – While Austin Trout got a much-needed win on Friday night, his performance might have raised more questions than answers about his future in the sport.

Trout was dropped twice in Round 3, but battled back to win a lop-sided 10-round unanimous decision over Daniel Dawson at the Pechanga Resort and Casino. All three judges scored the bout 97-90 in favor of Trout.

The fight headlined a Goossen Promotions card and was televised live on ESPN2.

Trout was coming off decision losses to Canelo Alvarez and Erislandy Lara, respectfully. He needed to bounce back with a victory in order to return to contender status in a talented junior middleweight division.

Dawson looked like a safe-enough opponent to get that win. He was unbeaten in seven bouts entering Friday night, but lost notable bouts in recent years any time he stepped up in competition.

Trout controlled the first two rounds, beating Dawson to the punch with right hooks or counter left hands to the head.

Just when it looked as though Trout was settling into his groove, the fight took a turn for the worse for the southpaw contender in the Round 3. Midway through the round, Trout missed with a left hand and was countered with a hard Dawson right hand to the head that dropped him to the canvas.

Trout was not visibly hurt and seemed to win back control of the round, but moments before the bell rang to end the round, Dawson landed another right to the head that dropped Trout again to the canvas.

“I wasn’t hurt, but he is strong,” Trout said after the fight. “I just have to stop being overanxious. It was the same thing that I did in the Alvarez and Lara fights. Those knockdowns woke me up.”

With significant purses and fights on premium networks in jeopardy, Trout battled back. Trout dominated the second half of the fight, beating Dawson to the punch repeatedly. He was able to counter with hard left crosses or right hooks, putting Dawson on the defensive and backing him up against the ropes.

Trout hit pay-dirt in the eighth round, showing brilliance of his former self that got him victories over the likes of Miguel Cotto. Trout landed a three-punch combination, culminating in the eighth round that dropped Dawson to the canvas. Dawson was able to get up and finish the round.

There were points during the last two rounds when Dawson looked ready to go. The amount of pressure and aggression from Trout had Dawson in danger, but Dawson was able to hold on and survive until the final bell.

While Trout had expressed in pre-fight press he wanted rematches against Alvarez and Lara, he believed another fight was in order to fix any mistakes he made in the Dawson fight.

“I need to shake some rust off,” he said. “I believe I need another mid-tier fight to correct some mistakes. I don’t want any layoffs. The busier I am the best of Austin Trout you will see.”

In the co-feature bout of the evening, welterweight Erick Bone won a 10 round unanimous decision over Mahonri Montes.

It was a cat and mouse game early on as Bone looked to counter as Montes attempted to walk him down. Bone got into a rhythm in the second round, even though he looked for spots to throw combinations when he got inside of Montes’ guard.

Bone began landing the more telling blows from the third round on. He scored well with counter left hooks to the head of Montes, who would shake his head as if to say the punches did not affect him. Anytime Montes would attempt to land a punch or rally, Bone would have already beat him to the punch. Bone was never in any real danger in the fight, using his more-superior ring generalship to keep his distance from Montes.

Bone would bait Montes to press forward, even though the price Montes would pay would be repeated left hooks or lead right hands to the head. As the bout progressed, Montes’ face reddened significantly and looked discouraged with every passing moment.

Sensing he was done on the scorecards, Montes came on in the final round, but was not able to hurt or put Bone in any danger.

An Elbiali right hand to the temple of Williams dropped him face-first onto the canvas. Referee Pat Russell immediately waved the fight over at 1:51 of the first round.

– In an all-out war, featherweight Juan Funez (6-0-1, 2 KOs) won a four-round majority decision over Fernando Fuentes. One judge scored the bout 38-38, while the other two judges scored the bout 39-37 in favor of Funez.