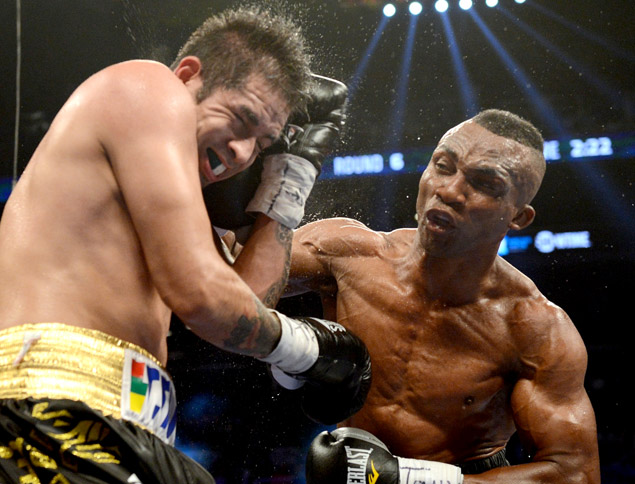 Although Sakio Bika was dropped in the fifth round and penalized for fouling when he fought Anthony Direll, he still escaped with a draw and retained his WBC super middleweight title.

Bika (32-5-3, 21 knockouts) will attempt to turn back Dirrell (26-0-1, 22 KOs), albeit more convincingly, when they meet on Saturday at StubHub Center in Carson, Calif., in support of Shawn Porter’s IBF welterweight defense against Kell Brook.

“I’m not going to change too much. I’m coming out to fight. I don’t want to run around and chase him. I’m going to show Anthony that I’m ready to do exactly what I’ve always done – to make people happy to see me fight,” said Bika, 35.

“The main thing I have to do is keep working hard every day and getting my rest when I can. I’ll be ready for Anthony. I always come to fight. I’m sure that I’m doing everything the way that I’m supposed to. And I’m training hard with my team so that I can defend and retain my belt.”

Bika is 4-0-1 with two stoppage victories since falling by unanimous decision to RING 168-pound champion Andre Ward in July of 2010.

After falling to Ward, Bika stopped Alfredo Contreras and Dyah Davis in the third and 10th rounds in December 2011 and June 2012, respectively. Bika then earned wins by unanimous and majority decision over previously unbeaten fighters, Nikola Sjekloca and Marco Antonio Periban in February and June 2013.

Bika is confident that on Saturday, his experience to go with his preparation under trainer Kevin Cunningham will be the difference in retaining his title yet again.

“Kevin and I always do the same thing. He keeps me positive, focused and working very hard to get ready for August 16…I’ve fought before in an open arena and I’ve fought in California before too. Anywhere they put a ring, in a shopping mall, a movie theater, I can fight anywhere.”