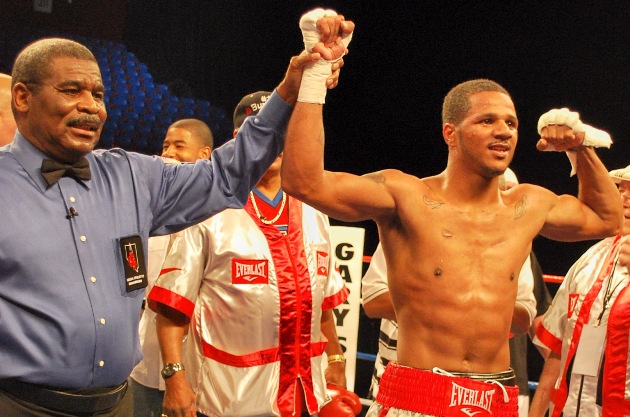 Super middleweight contender Anthony Dirrell watched with keen interest as Daniel Jacobs stopped Jarrod Fletcher in the fifth round for the WBA’s “regular” middleweight title on Saturday on Showtime.

Just as Jacobs survived a near-death experience with cancer, Dirrell overcame a scare from non-Hodgkin’s lymphoma.

“Of course I was watching because he’s a cancer survivor, which automatically makes him a winner by just beating that and getting back into the ring and doing what he does. He’s a cancer survivor, so that’s a blessing, and it shows you that God is good,” said Dirrell, who turns 30 in October.

“It just happens that Danny and I, we both have the same advisor [Al Haymon,] and it’s just meant to be at the same time. So we’ll definitely be having two cancer survivors who will have won championships in the same month over back-to-back weekends, because I’m definitely going to win this championship this weekend. So you’re looking at history in the making.”

Dirrell (26-0-1, 22 knockouts) will get another chance on Saturday at StubHub Center in Carson, Calif., in a rematch with WBC titleholder Sakio Bika (32-5-3, 21 KOs) on the undercard of a main event featuring Shawn Porter’s IBF welterweight defense against Kell Brook.

“This time, I’m going to stick to my game plan and what we worked on in the gym,” said Dirrell, a switch-hitting native of Flint, Mich., who expects to arrive in California on Tuesday from his training camp in Grand Rapids, Mich.

“This time, I’m going to do what I know how to do. I’m going to use my jab a lot more, and that’s something that we’re definitely working on. Everybody knows that I have a great jab. We worked on it a lot in the last camp, but, for some reason, in the fight, I just didn’t stick to it like I should have.”

Dirrell scored a fifth-round knockdown against Bika, who was also penalized a point for a foul at one point.

“When I dropped him in the fifth round, I really thought that I could have gotten rid of him, but I didn’t,” said Dirrell. “That kind of threw me off, but, I’m going to stick to the game plan and out-box him and knock him out.”

The younger brother of 2004 Olympian Andre Dirrell, Anthony was diagnosed with non-Hodgkin’s lymphoma shortly after he stopped James Hopkins in December 2006, and didn’t return to the ring until October 2008, when he decisioned Andy Mavros over four rounds.

From there, Dirrell scored nine consecutive knockouts, ending with a fourth-round stoppage of Renan St. Juste in December 2011. Then the motorcycle accident happened.

Dirrell was injured in May 2012, breaking his left leg, when the motorcycle he was riding slammed into the side of a car. He endured a four-hour surgery to repair it.

Dirrell returned to action from that accident in May 2013 with a unanimous decision victory over Don Mouton that was followed by a third-round stoppage of durable Anthony Hanshaw in July 2013. Prior to facing Bika, the bout with Mouton represented the longest Dirrell had gone in a bout.

Entering the match with Dirrell, Bika, 35, had won four straight fights, two of them by stoppage, since falling by unanimous decision to RING 168-pound champion Andre Ward in November 2010.

Bika had earned wins by unanimous and majority decision over previously unbeaten fighters, Nikola Sjekloca and Marco Antonio Periban in February and June 2013, respectively, and has also gone the distance in title-bout losses to Joe Calzaghe and Lucian Bute in October 2006 and June 2007.

The only other losses on Bika’s resume were by majority decision to current IBF 160-pound titleholer Sam Soliman in his 11th bout in October 2002, and by first-round disqualification to Jean Paul Mendy, whom he slugged while Mendy was down in July 2010 ÔÇö one bout before facing Ward.

“I only had about 15 seconds left in the fifth round when I dropped him in order to try to knock him out, and I really wasn’t able to finish him off, then,” said Dirrell.

“In the next round, he got his head back into it and was able to go on from there. But this time, I’m really going to stick to the game plan and out-box him and I think that I will be able to finish the job this time.”