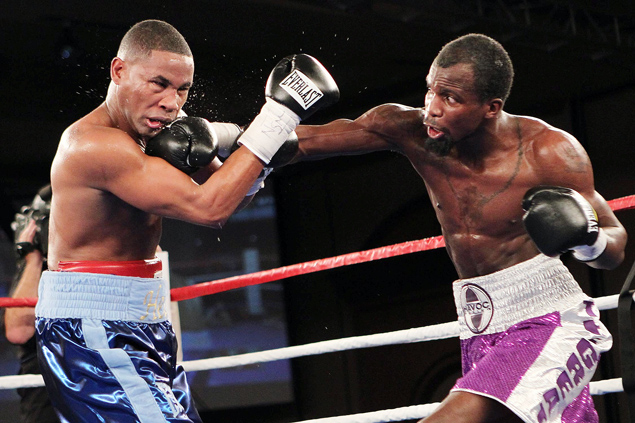 On this week’s edition of ESPN2’s “Friday Night Fights” Willie Nelson will take on Luis Grajeda in a 10-round junior middleweight contest.

Although Grajeda isn’t well known, Nelson is full of respect for his opponent and knows an impressive victory is important for his future.

“Nobody’s stopped him. He’s in shape and comes to fight,” Nelson said from his training base in Youngstown, Ohio, last Friday. “I can’t get a big fight unless I win this fight and do it impressively.”

It marks the second fight in two months for the strapping 154-pound contender following nearly a year off for elbow surgery.The hiatus canceled a fight with Matthew Macklin, and bouts against James Kirkland and Andy Lee have so far just been talk.

A win on Friday would certainly help get Nelson a fight with a bigger name, allowing him to perform on a bigger stage possibly before the end of the year.

Anson Wainwright – On Friday you’ll be facing Luis Grajeda in Fallon, Nevada. What are your thoughts on the fight?

Willie Nelson – Just because nobody knows him doesn’t mean he can’t fight. Nobody’s stopped him. He’s in shape and comes to fight. I can’t get a big fight unless I win this fight and do it impressively.

AW – In your last fight you stopped Darryl Cunningham in a single round – can you tell us about that fight?

WN – If I let him go three rounds or more it would have made me look bad because (Andy) Lee stopped him in one round and (Andre) Dirrell in two. Before the fight, (his trainer) Jack (Loew) imposed upon me that this kid (Cunningham) can’t go three rounds. The plan was to pop him with a few hard shots to see how he’d react. If he responded, to go after him; if not, just catch him here and there. I hit him with a big shot and he started moving backwards. So I went after him and finished him off with some clean shots.

AW – Prior to the Cunningham fight, you had been inactive for almost a year. Why were you on the shelf for so long?

WN – I was supposed to fight (Matthew) Macklin on HBO last December, but I had to have elbow surgery in November. Afterwards there was talk of me fighting on HBO against (James) Kirkland, (Andy) Lee or even Macklin but nothing happened.

AW – Before the hiatus, you won notable fights against Yudel Jhonson and John Jackson as well as tough fringe contender Michael Medina. What did those fights do for you?

WN – The Yudel Jhonson fight tested my will. He put me down early and I could have given up, but I had trained so hard for another fight and – it’s hard to explain – but I overcame adversity during that fight and kept coming forward fighting. John Jackson got in my head a little with his power. I hurt him in the ninth round but couldn’t finish him because I was so uptight. That fight really taught me to be patient and not get caught up in the hype. The Medina fight ended quickly because I caught him early. My confidence was high after that fight.

AW – If we look at THE RING ratings, what are your thoughts on the top performers in the division.

C – Floyd Mayweather – A hard worker, dedicated boxer who is one of the best all-time. I’d love to fight him.
1 – Canelo Alvarez – He’s young, strong with power, and a force to be reckoned with in the 154-pound division. He’s still young and I’m still not sure if he’s peaked. He’s the guy to beat. He’s improved since his Austin Trout fight and he’s been more focused.
2 – Erislandy Lara – A slippery fighter. Sometimes he’s a boring fighter, sometimes he’s decent, but he gets the job done. You can’t take anything away from him. He’s slick with a Cuban pedigree.
3 – Carlos Molina – Awkward but he wins. I don’t know what it is about him. He punches in bunches.
4 – Austin Trout – I’ve known him for years, he’s cool. A southpaw who has the basics down pat. What he lacks in power, he makes up for with skills. A great boxer who gives different looks and different angles.
5 – Demetrius Andrade – A slick southpaw who makes a lot of mistakes but gets away with it because of his natural ability and quickness. He’s smart like Roy Jones. His natural ability takes over and it got him the WBO title.
6 – Vanes Martirosyan – A good fighter who is top tier at 154. He’s had chances to step up to the next level but hasn’t. I don’t know why. He’s still at the top.
7 – Willie Nelson – He can’t get caught up in the hype when he’s fighting on the big stage. Sometimes he’s gotten away from the game plan because he felt like going to war. Will he be world champ? It’s up to him, in and out of the ring.
8 – Jermell Charlo and 10 – Jermall Charlo – I don’t really know one from the other. One has power, the other speed. I think the twins are good for boxing. I don’t think they’ll ever fight each other, but they’ll always wonder which one would win. They’re with the people who have the big names in our division. I don’t know how good they are but we’ll find out.
9 – Ishe Smith – He was world champion, until then he was known for being on “The Contender.” I don’t think too much of him but he’s a real fighter who is trying to hang in with the young guys.

AW – At this point aside from Mayweather-Maidana II at welterweight and Molina-Cornelius Bundrage, none of the big names at 154 pounds have locked in fights for later this year. Is there someone you’re targeting?

WN – I’m not targeting anybody right now. I’m caught in the middle of a power struggle because some fighters are with HBO and others with Showtime. I’d fight any of the top guys but I’m not going to call out names right now.

WN – Of course, to be world champion, but after I’m done fighting, I’d love to stay in boxing. At some point, I’ll have to give this up and stop taking punches. I’d like to stay in boxing as a promoter, manager or coach. Father Time will come; everybody isn’t (Bernard) Hopkins, (Floyd) Mayweather, Sugar Ray Leonard or Sugar Ray Robinson. That time for me is coming, sooner or later. I’d also like to be a role model for kids who look up to me. I want to be known as a great person.

AW – Away from boxing tell us about your life?

WN – I try to spend as much time as I can with my family and four kids.

AW – In closing do you have a message for the junior middleweight division?

WN – No. I just let my hands do the talking and keep winning.