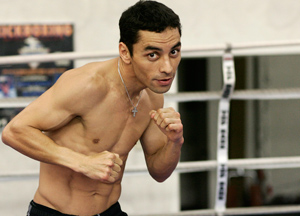 Montiel at different times held titles at flyweight, junior bantamweight and bantamweight, beatings the likes of Ivan Hernandez and Martin Castillo. His most recent loss was in November 2011, by unanimous decision against future titlewinner Victor Terrazas, after being floored in the fifth round. He was last in the ring for a majority decision victory over ex-beltholder Cristobal Cruz on March 15.

Montiel’s most dramatic defeat was in February 2011, when he was knocked out by a huge left hook from Nonito Donaire in the second round, ending an 11-0-1 (9 KOs) run.

Montiel entered the Donaire bout with the WBO and WBC bantamweight belts around his waist, having won the latter in April 2010 with a sensational fourth-round knockout over Hozumi Hasegawa, who at the time was on a 25-fight winning streak.

Montiel’s other losses were by majority decision to Mark “Too Sharp” Johnson in 2003, and by split decision to Jhonny Gonzalez in 2006.