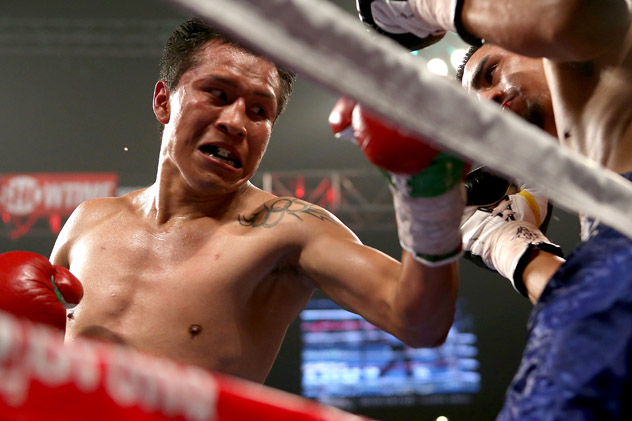 There is no need to remind Francisco Vargas that he is the underdog in his scheduled 12-round fight against Juan Manuel Lopez on Saturday.

While the two-division titleholder from Puerto Rico has the experience factor in his favor, Vargas is undeterred, focused to win and surprise doubters in the process.

Vargas faces Lopez at the MGM Grand in Las Vegas, Nev. The bout will precede the main event showdown between Canelo Alvarez and Erislandy Lara.

Vargas is unbeaten and has slowly evolved into a contender after a few years as a prospect. The 2008 Olympian who represented Mexico has molded into a boxer-puncher, not just relying on his power to knock out fighters, as was the case in his first 15 to 17 fights.

Vargas’ last three victories have been by decision over B-level opposition, including his last fight on March 8 against Abner Cotto.

Now he faces a tall order in Lopez, a southpaw fighter who has faced a who’s who of fighters in the last five years. While his best days may be behind him, Lopez showed that he is still a devastating puncher by stopping Daniel Ponce De Leon in his last fight on March 15.

While Vargas respects Lopez as a fighter, he believes he has the right game plan to trump Lopez’s experience and come out victorious.

“I feel very good and I can’t wait to make the best of this opportunity,” Vargas told RingTV.com over the phone on Wednesday. “I trained very hard for this fight and I believe my discipline and work ethic in the gym will work in my favor.

I know Lopez has a lot of experience and he’s a former world champion. But he is not invincible and he has been defeated. I’m into this fight to win and that’s what I’m going to do. I will fight intelligently and be victorious.”

Those are strong words from a fighter who does not have a breakthrough or career-defining win. That could change should he pull off the upset over Lopez on Saturday night.

While he has headlined Golden Boy Promotions cards and has fought in Las Vegas, he will be fighting before a larger audience in person and under brighter lights so to speak.

While it could overwhelm many fighters, he has taken it all in.

“I feel great taking part in all of these activities,” said Vargas, who is managed by Joel De La Hoya, older brother of Golden Boy Promotions President Oscar De La Hoya. “I’m among the best fighters who are fighting this weekend. To stay here and at this level, I have to win. That’s my motivation. I’m looking at this fight as I’m fighting for the first time as an amateur.”

Vargas says he’s eager to showcase his improving boxing ability. Vargas will always have power in both hands, but believes his improved boxing ability has given him more of an advantage than in previous fights.

“In time, I have improved a great deal,” he said. “You learn with each fight and that’s how one becomes a better overall fighter. We worked on speed for this fight against Lopez and that could be the key. I know that after my fight on Saturday, I will sit and analyze what I learned and to continue improving.

“This fight will lead me to gaining experience, not just a win. I’m fighting a two-time world champion, but fighting intelligently gives me the likelihood of a win.”