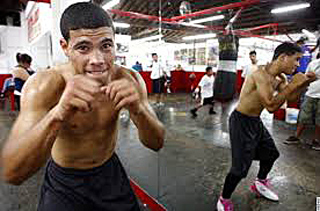 When their 130-pound rematch was announced in early March, Juan Manuel Lopez said he expected "a difficult fight" with Daniel Ponce de Leon, a fellow two-division titleholder whom Lopez stopped in the first round for the WBO junior featherweight title in June 2008.

Plenty had changed since the first meeting between the two southpaws heading into their crossroads bout on March 15, which 18 of 20 boxing insiders polled by RingTV.com expected Lopez to lose.

Ponce de Leon had earned a unanimous decision victory over Joksan Hernandez in November after having been dethroned as WBC featherweight beltholder following a ninth-round knockout loss to Abner Mares last May, this after having won the 126-pound belt with an eight-round technical decision over Jhonny Gonzalez in September 2012.

Ponce de Leon's triumph over Gonzalez ended a 12-fight winning streak that had included 11 knockouts for Gonzalez, who regained the belt with a first-round stoppage of Mares last August.

Meanwhile, Lopez had gone 3-3 in his previous six fights, being stopped in all his losses, incuding a fourth round knockout loss to Mikey Garcia last June. Lopez had sandwiched a second-round knockout of Mike Oliver in October 2011 between stoppage losses to Orlando Salido in April 2011 and March 2012.

"You know, unfortunately, boxing is that way. You're only as good as your last fight. I was coming off of the loss to Mikey Garcia," Lopez, who turns 31 on June 30, said during a Thursday conference call. "So a lot of people didn't give me the opportunity to win. But I didn't listen to them. I didn't listen to none of them. I only listened to my team, and we went in there, and we knew what we had to do."

Although things looked bleak early on for Lopez against Ponce de Leon, the Puerto Rican rose from the canvas to twice floor Ponce de Leon the en route to a second-round knockout win.

"Yeah, he dropped me, and I was off balance a little bit, but I got up and I showed that my power is still there," said Lopez. "Obviously, I came out of the fight with a spectacular victory, and that's what we're looking forward to doing in this fight, too."

Lopez returns to action on July 12 at the MGM Grand when he faces Francisco Vargas (19-0-1, 13 KOs) in support of the junior middleweight main event between Canelo Alvarez and Erislandy Lara on Showtime Pay-Per-View

"JuanMa is undergoing a career resurgence with three wins in his last four bouts, and he's fighter who is very exciting," said Oscar De La Hoya, president of Golden Boy. "He's coming off the win on March 15 against Daniel Ponce de Leon in the second round, and he's obviously very confident about a victory come July 12."

But the 29-year-old Vargas (19-0-1, 13 KOs) is coming off three impressive wins, the most recent being a unanimous decision over Abner Cotto in April that had followed consecutive unanimous decision victories over previously unbeaten Brandon Bennett and Jerry Belmontes in August and December, respectively.

"Obviously, I know how dangerous Lopez is. I'm working hard to be ready to go 12 rounds," said Vargas. "I'm working for distance. We're working round-by-round, but we're going to see what he brings."

Lopez aims to be the same version of himself that faced Ponce de Leon during a quest to regain a third bout with Salido, a rematch with WBO beltholder Garcia or a title in some other fashion.

"Obviously, a champion at 130 right now is Garcia, and I don't know what he's going to do. A lot depends on that, but, I would also welcome a third fight with Salido. I feel that I was dominating the fight and was winning and we had a little problem in there, and he got it," said Lopez.

"But I'm now with a new team, and we're focused and we're working hard…Obviously, the victory [over Ponce de Leon] has done a lot for me. It's motivated me and has given me that extra push that I needed. As far as winning another title, that is the go, and that's what we're working on, but first things first, there's Francisco Vargas."