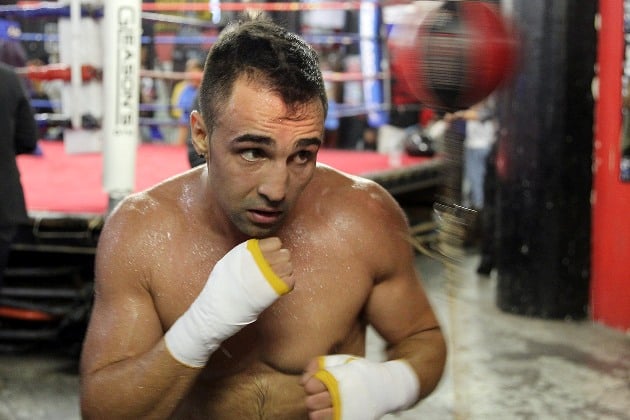 "I had it eight rounds to four for Algieri," said Malignaggi, who worked as a ringside commentator for Sky Sports. "There was nothing going on for Provodnikov after Round 1. The guy's not making adjustments. There was not one adjustment made by Provodnikov after Round 1. I mean, there was not one adjustment, and that's pretty simple. He spent the whole night trying to land the same big shot and that same big punch that he landed in Round 1, and that didn't happen for him. It just didn't happen."

Although Algieri said that he could scarcely see out of a right eye by the eighth round and that he was completely blind out of it by the 12th, he did, nevertheless, out-land Provodnikov, 288-to-205 in overall punches, 177-to-164 in power shots, and, 111-to-41 in jabs.

"Provodnikov had nothing behind the jab. I mean, he was literally chasing Algieri around, and running into pot-shots all night. Finally, he would corner him to the ropes and then throw a couple of looping shots," said Malignaggi.

Malignaggi's comments followed those of RING and WBC super middleweight champion Andre Ward, who said Chris Algieri "boxed his tail off," against Provodnikov.

"I didn't score the fight, but I thought he won. Whether it was by a point or two points, I thought Algieri boxed his tail off. I could be it being swayed the other way. I mean, we're talking rounds here. So if another judge sees it two rounds another way, then Provodnikov gets his hand raised," said Ward, who worked as a ringside commentator for HBO. "I don't that you can scream 'Home Cooking' or anything like that," said Ward, admiring Algieri's resolve. "I think that they could make a documentary out of this night. Hat's off to Algieri, man. Provodnikov, he showed up, but Chris Algieri was just the better man tonight."

Provodnikov (24-3, 16 KOs) was coming off a 10th-round stoppage of Mike Alvarado, whom he floored twice on the way to winning his belt in October.

Algieri stands 5-foot-10 to Provodnikov's 5-6 and correctly predicted that he could duplicate the efforts of Bradley and Mauricio Herrera, the latter whom defeated Provodnikov by unanimous decision in January 2011.

"There was nothing going on for Provodnikov past Round 1, so it becomes frustrating to watch as a guy that is not making any adjustments, but yet, there's people scoring the damage on Chris's face, because that's all you're scoring," said Malignaggi.