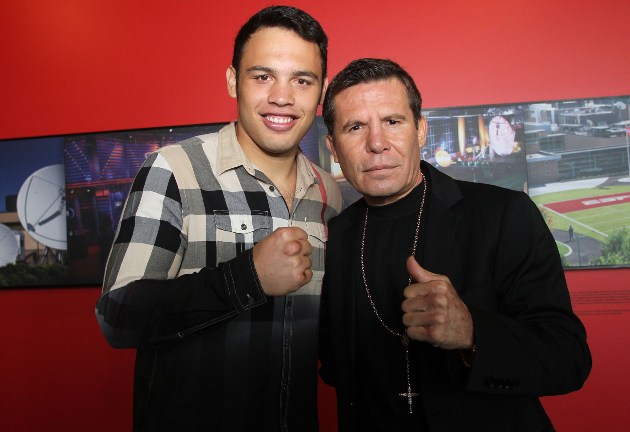 The manager of Julio Cesar Chavez Jr. said that the he is willing "look at" a potential offer to fight IBF super middleweight titleholder Carl Froch "if it comes," adding that the fighter's father and legendary former world champion would be among those consulted.

In an earlier report by RingTV.com in which Arum stated that he had begun preliminary discussions with Froch's promoter, Eddie Hearn, of Matchroom Sport, for a matchup in late October in Las Vegas, Arum dismissed reports that he was attempting to bypass manager Billy Keane in order to deal solely with Julio Cesar Chavez Sr.

"First of all, I don't care how Bob gets the contract to us, whether it be fax, e-mail, pidgeon carrier, through the father, it doesn't matter how the contract comes to us, as long as it comes, and if it comes, we'll look at it. We'll evaluate it for what it is," said Keane.

"We're a team. We're all going to look over it. Julio, myself, Julio's lawyer, and we're going to consult Julio's father. Julio's father is an important part of the team, and he gets consulted on everything."

Arum said that Hearn will be in Brooklyn as the promoter of junior middleweight Brian Rose, who will challenge WBO beltholder Demetrius Andrade at Barclays Center on the undercard of a main event featuring WBO 140-pound titleholder Ruslan Provodnikov against Chris Algieri.

"Eddie will be in Brooklyn this weekend, because he has Rose fighting Andrade. So he and Carl will talk, and they he will call me up," said Arum. "Hopefully, we'll have some sort of tentative understanding. But it is only at that point that I can make a proposal to Chavez on the prospect."

Arum's relationship with Chavez and Keane had begun to deteriorate over their failed negotiations for a potential bout with unbeaten WBO middleweight titleholder Gennady Golovkin, but Keane indicated that the situation still could be resolved.

"I only live 15 minutes away from Bob in Hollywood, Calif., so he could walk [the offer] over to me, or I can come and pick it up," said Keane. "Like I said, he can send it to the father, or he can send it by pidgeon carrier. Whatever he wants to do, and however it comes."