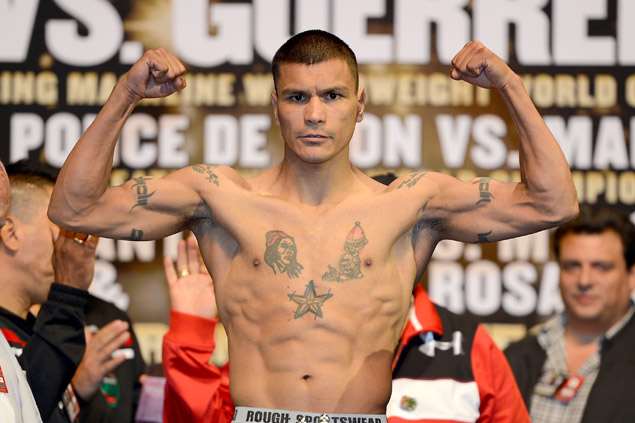 The knockout was the sixth straight during a run of eight consecutive victories for the 28-year-old Roman (46-11, 35 KOs), who has stopped seven fighters total during that time. Roman had last suffered defeat by unanimous decision to Dante Jordan in October 2012.

A 33-year-old Mexican Olympian who turns 34 next month, Ponce de Leon (45-7, 35 knockouts) was stopped for the third time in his past four fights. In his previous 130-pound rematch in March with left-handed fellow two-division titlewinner Juan Manuel Lopez, Ponce de Leon was dropped twice and stopped in Round 2 after having dropped Lopez earlier in the round.

Prior to his return bout against Lopez, Ponce de Leon earned a unanimous decision victory over Joksan Hernandez last November, which helped him rebound from his ninth-round TKO loss to Abner Marez that dethroned him as WBC featherweight beltholder last May.

Ponce de Leon had won the 126-pound belt with an eight-round technical decision over Jhonny Gonzalez in September 2012, ending Gonzalez's 12-fight winning streak that had included 11 knockouts. Gonzalez later regained the belt with a first-round stoppage of Mares last August.

In other bouts, Ponce de Leon had gone the distance with then-unbeaten Adrien Broner and Yuriorkis Gamboa in consecutive unanimous decision losses at junior lightweight bouts in 2011.