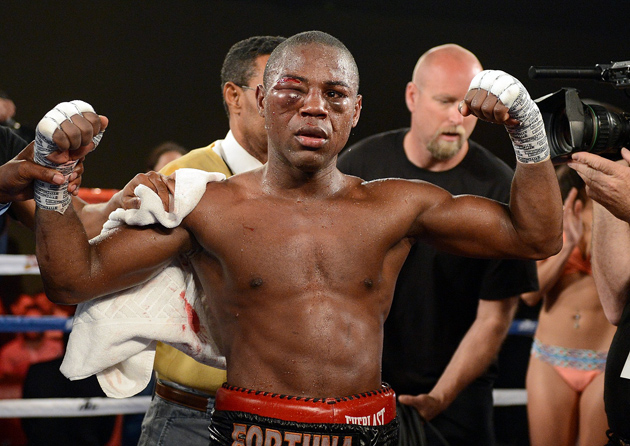 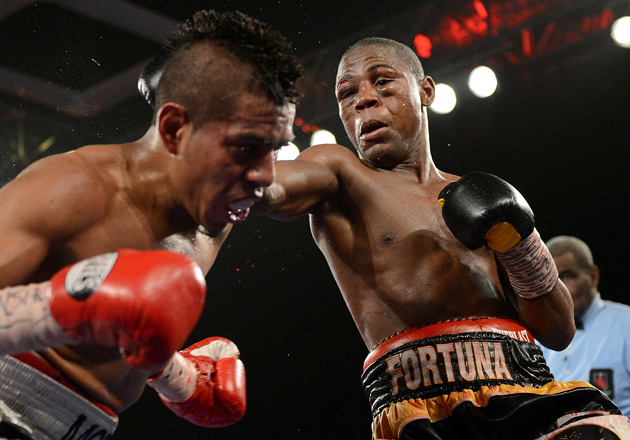 Javier Fortuna lands a right to Juan Antonio Rodriguez during their hard-fought 10 rounder on May 31 in Las Vegas. Fortuna won a decision. Photo by Naoki Fukuda

Javier Fortuna has scored spectacular highlight-reel knockout victories in the last couple of years. While he kept winning and remained unbeaten, he had yet to answer how he could deal with unexpected adversity in a fight.
On Saturday, he answered some of those questions while he was able to remain unbeaten.

Fortuna won a harder-than-expected 10-round unanimous decision over Juan Antonio Rodriguez at the Tropicana Hotel and Casino in Las Vegas, Nev.

The bout headlined a six-bout card that was co-promoted by Lou DiBella's DiBella Entertainement and Sampson Lewkowicz.

The boxing world has come to know Fortuna as the hard-hitting Dominican that has pulled off spectacular knockout victories over the likes of Yaundale Evans, Cristobal Cruz, and Miguel Zamudio. None of them gave Fortuna a challenge, which made people consider him a serious threat in the featherweight division. Prior to fighting Rodriguez, Fortuna stopped Francisco Lorenzo in the fourth round on March 13.

Rodriguez had won five in a row prior to his fight against Fortuna, with the most recent victory over Yenifel Vicente by majority decision over eight rounds on Jan. 10.

Fortuna was on the attack from the opening bell, looking to load up with punches while Rodriguez tried to counter. Both southpaw fighters had their moments, but Fortuna seemed to stun Rodriguez with a counter left cross in the second round.

Moments into the third round, Fortuna hurt Rodriguez with a left hand to the head, eventually dropping him with a barrage of punches. Rodriguez recuperated well and later in the round, looked as though he scored a knockdown by landing a jab to the head. Referee Robert Byrd missed the knockdown, ruling Fortuna had slipped.

Fortuna had developed a cut over the right eye by the fourth round, which looked as though it might have been caused by a punch. Fortuna kept pawing at the cut, which bled profusely during the remaining of the fight.

There were times the fight was tactical as Fortuna moved around the ring while Rodriguez pressed the action. Fortuna landed the more telling blows during most of the exchanges.

It appeared as though Rodriguez scored a knockdown in the eighth round, when Rodriguez landed a left hand to Fortuna's head. Fortuna's knee did make contact with the canvas, but referee Robert Byrd missed administering another knockdown.

The fight became more compelling in the 10th round. With both eyes almost shut, Fortuna was stunned a few times during the round by Rodriguez. With Rodriguez throwing and landing more at will, Fortuna was able to hang on by knowing when to grab onto Rodriguez and making it until the final bell.

All three judges scored the bout 98-91 in favor Fortuna, whose recent goal is to face Miguel "Mikey" Garcia. With the cut over his right eye bleeding profusely and very bad swelling, that bout will not take place for a quite a while. Fortuna needs to make certain adjustments in his defense before a fight against Garcia takes place. 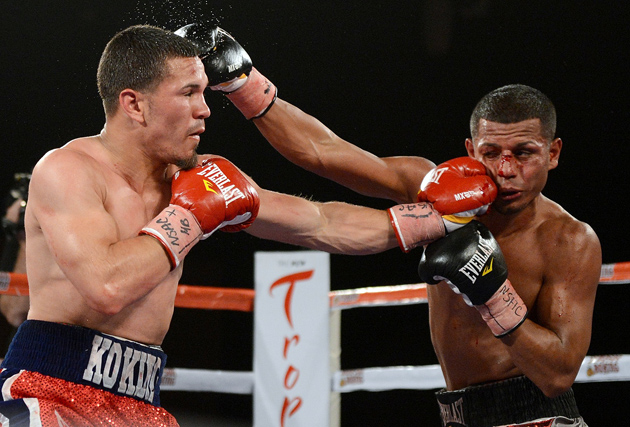 In a bout the featured clenches, fouls, and a knockdown, super bantamweight Luis Sosa remained unbeaten with a close unanimous decision over Luis Orlando Del Valle.

While each fighter was able to sneak in multiple hooks to the head, most of the action in the first couple of rounds was dictated by clenches and fouls. After repeated warnings, Sosa was deducted a point in the third round by referee Kenny Bayless for landing below Del Valle's belt line.

As the bout progressed, there were less clenches and more combinations that were exchanges between the two. Del Valle hit pay dirt in the fifth round when he dropped Sosa with a left to the head. Sosa was not visibly hurt and it looked as though he was off-balanced when the punch connected.

Sosa had another point deducted in the seventh round, this time for hitting on the break.
While Del Valle had success in landing to the head and body, he had to deal with a cut on his nose that bled profusely in the latter stages of the fight.