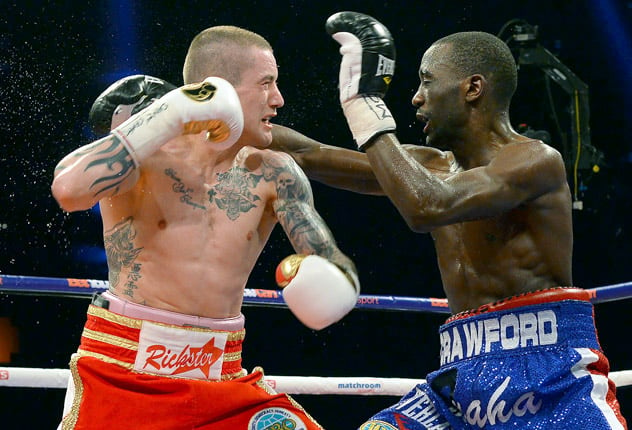 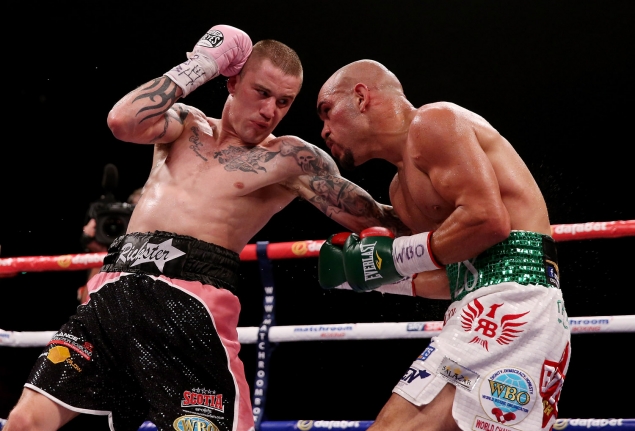 Ricky Burns (L) lands a body shot on Raymundo Beltran during their September 2013 fight, which ended in a controversial draw. Photo by Scott Heavey/Getty Images.

Two months ago Burns, who is rated No. 5 by THE RING at 135 pounds, lost a unanimous decision to the talented American switch-hitter Terence Crawford. The Omaha native boxed brilliantly and Burns, despite a game effort, always seemed to be a step behind as he surrendered his WBO lightweight title.

“I still haven’t watched the Crawford fight,” said Burns, who has taken part in nine world title bouts. “He made some adjustments early on and I kept walking on to the counters. I wish I had forced the action a bit more, but it’s easy to say that in hindsight. In the end I was just too hesitant and I’ll learn from it.

“I only found out this morning that Yuriorkis Gamboa is up next for Crawford, but I think he’ll have his work cut out for him. For me, Terence is going to be a very tough man to beat but, as good as he is, I’d love to fight him again.”

Since the Crawford setback, Essex-based Tony Sims has replaced Billy Nelson as head trainer, in a move which has forced Burns to relocate to England for preparation. Having recently returned from a brief spell in Spain, the Scotsman is all systems go and anxious to show off his new wares.

“The training in Spain went well,” said Burns. “We were just getting started on my preparation, but I was helping Kevin Mitchell, who is scheduled to appear on Carl Froch’s undercard at the end of this month. We’ve been sparring together and getting some runs in.

“Tony has us doing different things in the gym. We do four- and five-minute rounds in sparring and there are a load of new circuit routines. Also, he’s up with us in the morning to do track work. It’s a change that I feel was needed and I’m really happy right now.”

Burns’ next opponent holds a top 10 ranking with the WBC, and this reporter asked the 31-year-old what he knows of both Zlaticanin (18-0, 13 knockouts) and that particular organization’s champion, Omar Figueroa.

“All I know is that Zlaticanin is a southpaw and he’s unbeaten,” said Burns. “Tony has already had a look at him, so he’ll be sourcing the appropriate sparring partners for us. Still, to me, a fight is a fight and I’m just ready to get on with it.

“Matchroom (Burns’ promoter) are keen to take me down the WBC route and Figueroa has been ordered to open negotiations with mandatory challenger Daniel Estrada. From our side, if all goes well in June, then Eddie [Hearn] has said that they’re going to try and make my next fight a final eliminator.”

Burns’ defeat to Crawford followed a lackluster performance against Puerto Rican power-puncher Jose Gonzalez and a hotly disputed draw to Raymundo Beltran. Indeed, the last time the affable Scotsman looked on peak form was when he defeated new stablemate Kevin Mitchell via fourth-round stoppage in September 2012.

Still, it is clear that Burns (36-3-1, 11 knockouts) is hungry to redeem himself and his fires have been rekindled ahead of this summer showdown with Zlaticanin who, despite being a relatively unknown quantity, carries an unbeaten record, a high knockout ratio and six years of pro experience.

“One fight at a time, but I’m still adamant that I have a good few years left in the tank,” said Burns. “I was disappointed that I lost the world title, but I’ve made a few changes which have brought the spark back in the gym.

“I think people will see the best of me in my next fight and I’m looking forward to getting back out there in front of a Scottish crowd. On June 27, I’ll be ready to do the business.”

Tickets for Ricky Burns vs. Dejan Zlaticanin went on sale today and are available from www.matchroom.com