The ‘other’ Carlos Molina talks about fighting Adrien Broner 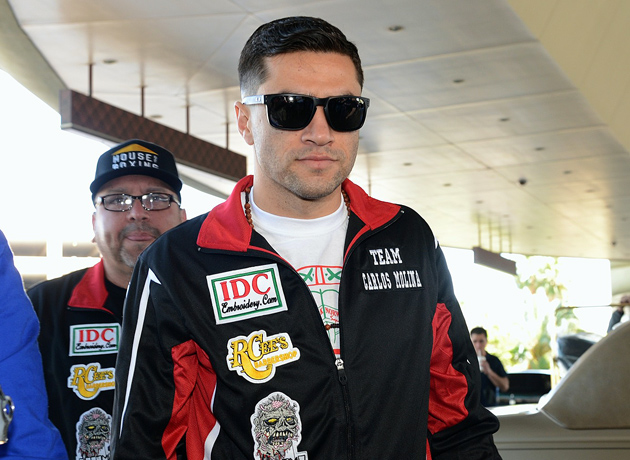 LAS VEGAS — Prior to Tuesday, the last time that a boxer named Carlos Molina was in Las Vegas, it was an IBF junior middleweight titleholder who was arrested and jailed five days before his scheduled title defense, which was eventually replaced by another fight.

Another fighter named Carlos Molina was at the MGM Grand on Tuesday, but this one is a 140-pounder who will face Adrien Broner at the Grand Garden Arena on Showtime Pay Per View.

"But then, when they started saying whatever the other stuff was, then we needed to clarify that it was not me. Just people confusing me and mentioning my name on different things, whether it's the media and on Twitter and stuff. There was a few places where they put up my picture and my face, and I was like, 'Hold up, man, that's not me. Do you homework.'"

The Carlos Molina (17-1-1, 7 knockouts) who will face Broner (27-1, 22 KOs) discussed his upcoming bout and being confused with the other Carlos Molina with a cluster of reporters in the VIP room near the lobby of the MGM on Tuesday.

"We've gotten confused all the time, when he was fighting or when I was fighting," said Molina, who was last in the ring in December 2012, when he lost by 10th-round stoppage to former titleholder Amir Khan, who will face Luis Collazo on the Mayweather-Maidana card. "Even some of my family members would call me when he was fighting and be like, 'Hey, good luck,' and I would be like, 'Nah, it's not me.'"

Since the other Carlos Molina's arrest, Molina said that stories have been published dipicting him instead of the one who remains in jail.

Molina's focus has shifted to Broner, a three-division titleholder who will be making his junior welterweight debut after having been dethroned as WBA 147-pound beltholder following a unanimous decision loss to Maidana in December.

Moments before Molina arrived, Broner sat where Molina did and described his opponent as "a tough fighter," as well as "a punching bag with arms and legs."

"I think the only fight that he's seen me fighting is probably my fight against Amir Khan, and with Amir Khan, I just fought a completely wrong fight, and I think that Amir Khan's style and his style are completely different," said Molina.

Molina considers Broner to be more of a stationary target than Khan.

"With his style, he's more of a guy who likes to pot-shot and likes to pick and choose his places when he's going to throw his punches. He doesn't have a lot of footwork. Amir Khan, what gave me trouble was that he had a really long reach. He used his legs a lot. He would throw flurries and move. Adrien Broner's calling me the punching bag, but in his last fights, I haven't seen him moving a lot," said Molina.

"Adrien Broner just kind of stands there. Look at what he did with Maidana. He just standing there the whole fight. We worked out pretty much every scenario in the gym, whether he's going to be coming at us or if we're going to be going at him and cutting off the ring. We're ready for anything that he gives to us."