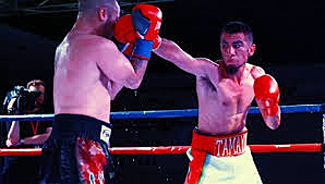 Efrain Esquivias has been a notorious slow starter throughout his professional career. He demonstrated it in his last bout on Dec. 7 against Rafael Marquez before scoring a dramatic knockout in the ninth round.

The same thing occurred on Friday night against Ruben Tamayo. Esquivias dug himself a hole that unfortunately he was unable to climb out of.

Esquivias suffered a major blow to his career, losing an eight round majority decision to Tamayo at the Doubletree Hotel in Ontario, Calif. The bout headlined a five-bout "Locked N' Loaded" card, presented by Thompson Boxing Promotions.

Esquivias was riding high from the victory over Marquez. Unfortunately, Esquivias suffered a back injury in training camp a few weeks later that put him on the shelf. Esquivias was cleared to return the gym about a month ago.

Another factor that might have hindered Esquivias was that he weighed in at a career-high of 136 pounds against Tamayo. He actually outweighed Tamayo by four pounds.

After a tentative first round, the southpaw Tamayo was able to throw and land multiple combinations to the head and body of Esquivias. He seemed to pull the trigger a second or so quicker than Esquivias, who had to gather himself again after Tamayo landed.

Midway through the fight, Esquivias began to find a rhythm, landing repeatedly with straight right hands to Tamayo's head. While he presses the fight, he looked winded at times, fighting in spurts, but landing the cleaner punches in the sixth and seventh rounds.

Sensing he was down in the final round, Esquivias continued to press forward. He was able to connect, but was not able to land anything significant to hurt or stun Tamayo.

Welterweight Giovani Santillan won an eight round unanimous decision over Daniyar Ganyk in a battle between unbeaten prospects.

The southpaw Santillan was the aggressor from the opening bell, pressing the attack and landing hooks and crosses to the head of Ganyk. The taller Ganyk was able to land an occasional straight right hand or uppercut to the head, but was not busy enough to win rounds during the first half of the fight.

Santillan did his best work in the middle rounds, trapping Ganyk against the ropes and landing overhand left crosses to the head. Santillan's punches snapped Ganyk's head back, but the Ukrainian fighter did not look visibly hurt from the punches.

Ganyk came on in the final two rounds. He was effective in walking Santillan down and following up with right hands to the head. One Ganyk right to the head in the eighth round drew blood from Santillan's nose. Sensing he was ahead and possibly because he was tired, Santillan boxed until the final bell.

Roman stops Alcantar in one.

Jose Roman hardly broke a sweat in knocking Lauro Alcantar out in the first round.

Roman, who is trained by Joel Diaz in Indio, Calif., landed a hard left hook to Alcantar's body. Alcantar turned away and dropped to the canvas, writhing in pain as referee Raul Caiz, Jr. counted him out at 1:19.

– In lightweight action, Erick Ituarte won a four round unanimous over Juan Sandoval. All three judges scored the bout in favor of Ituarte, 40-36, 40-36, and 39-37.

– Super bantamweights Fernando Samaniego (6-0-1, 3 KOs) and Francisco Camacho (2-4-1, 1 KO) fought to a four round majority decision draw. One judge scored the bout 39-37 in favor of Samaniego, while the other two judges scored the bout 38-38.