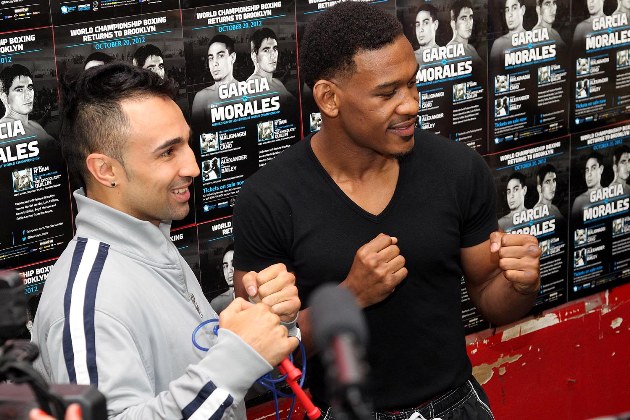 Jacobs is stepping in for the critically acclaimed Malignaggi for the second straight week as Malignaggi recovers from last Saturday's fourth-round stoppage loss to IBF welterweight titleholder Shawn Porter at the D.C. Armory, in Washington, D.C.

After the fight, Malignaggi was taken to a nearby hospital in Washington D.C. Malignaggi has been released and is recovering comfortably at his home but is opting to err on the side of caution for this week's event.

Malignaggi said that he will return for the May 3 Showtime Pay-Per-View card at the MGM Grand in Las Vegas where RING and WBC welterweight champion Floyd Mayweather Jr. will face WBA counterpart Marcos Maidana in the main event.

"I am feeling very good at this stage," said Malignaggi, 33, who will be honored as the winner of the Boxing Writers Association of America's "Sam Taub Award for Excellence in Broadcast Journalism" at the organization's annual dinner on May 1.

"But anytime you have any level of concussion, your best bet is to fully recover before doing virtually any activity. There will be plenty of action on Saturday and the audience will be in good hands with Danny on the stick. But make no mistake; I will not miss next week's event in Las Vegas. I have been looking forward to that fight card for some time. I'll be ready."

Jacobs called last weekend's Porter-Malignaggi fight as well, one that was sandwiched between a split decision victory in the main event by IBF light heavyweight titleholder Bernard Hopkins that dethroned WBA counterpart Beibut Shumenov and the opening bout featuring Peter Quillin winning a unanimous decision over Lukas Konecny in defense of his WBO middleweight title.

"It was a tremendous honor to be part of that event and to show the fans a different side of myself," said Jacobs. "I received terrific feedback, not only from Showtime but from the fans, my friends and family. Obviously, Paulie's welfare is my main concern but I know he will be back behind the mic soon. In the meantime, I look forward to doing another great job at ringside."

The Thurman-Diaz card will follow the 9 p.m., ET/6 p.m., PT broadcast of the second of four 30-minute episodes of All Access: Mayweather vs. Maidana.