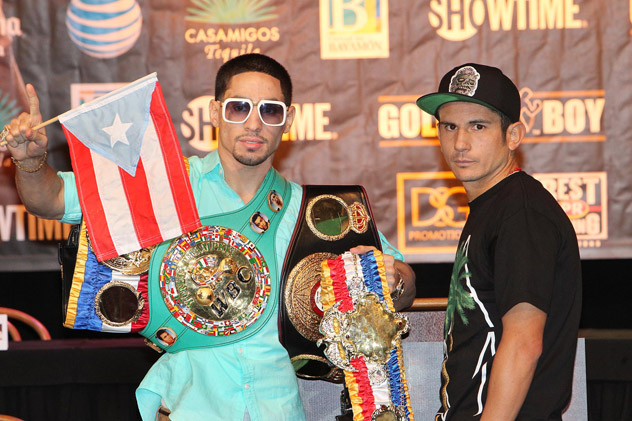 Junior welterweight champion Danny Garcia, who defends his RING, WBA and WBC titles against Mauricio Herrera on Saturday on Showtime, vowed to "tear his ass up" during Friday's weigh-in staredown. Herrera promised to "give him a lesson" when they meet at the historic Coliseo Ruben Rodriguez in Bayamon, Puerto Rico.

Garcia weighed 139 3/4 pounds compared to 139 1/4 for Herrera. Their bout is the headliner to a three-bout card co-featured by heavyweights Deontay Wilder, who weighed 227 pounds, against Malik Scott, who weighed 238, in a WBC title eliminator bout.

On Showtime Extreme preceding the Garcia-Herrera, Wilder-Scott doubleheader, there is a 130-pound rematch between Puerto Rico's Juan Manuel Lopez and fellow two-division titleholder Daniel Ponce de Leon, who weighed in at 129 and 128 3/4, respectively.

A 25-year-old resident of Philadelphia, Garcia (27-0, 16 knockouts) Garcia was last in the ring for a unanimous decision over Lucas Matthysse in the co-featured bout to Floyd Maywether Jr.'s majority decision over Canelo Alvarez last September.

Garcia appeared to have initiated the dialogue during the post-weigh-in face-to-face with Herrera, which was streamed live by Showtime.

"I just told him that I'm gonna tear his ass up. That's it. It's going to be a fight tomorrow. That's in his head. I know that I'm ready. I'm 110 percent ready. Look at my body and look at his body and tell me who is ready," said Garcia, whose father and trainer, Angel Garcia, was born in Puerto Rico.

"I was born to fight on this level, and everyone's going to see that tomorrow night. This means a lot to me. It's a dream come true for me. All that I have to do tomorrow is to go out there and perform for my Puerto Rican fans. I always go for the knockout, but I'm prepared for 12 rounds, and you're going to see fireworks."

"He just said that he as going to tear me up, and I just smiled at him. He's a little boy, and I'm going to show him how to fight and I'm going to give him a lesson. That's why they call me 'El Maestro.' There's been a lot of strange things in a championship fight when you go in thinking that it's a tuneup fight," said Herrera.

The WBC has declared that the bout between Wilder (30-0, 30 KOs) and Scott (36-1-1, 13 KOs) is an eliminator whose winner will be the mandatory challenger to the victor of the Bermane Stiverne-Chris Arreola fight, which is for the title vacated by Vitali Klitschko and is reportedly taking place on May 10 at a site to be determined, according to ESPN.com.

Scott, 33, both weighed in and participated in the staredown with Wilder while wearing a large, paper bag on his head — with holes cut out for his eyes — that had  the phrase "Get Ya Popcorn Ready" written upon it in black marker.

"Me and Deontay are the best fighters in the heavyweight division right now. I'm the most purely talented, skillful fighter, and Deontay's the biggest puncher. It's the Fight of the Year, so we want the fans to get ready. I've been telling people for the last five weeks to get their popcorn ready, and I'm looking forward to being victorious on Saturday night. I'm saying that I'm fighting for my family, and I'm fighting for my city, and I'm not really chasing fame," said Scott rebounded from a disputed sixth-round knockout loss to England's Dereck Chisora in July with a second-round stoppage of Grover Young on Jan. 24.

"But it's a nice metaphor because those are the things that actually make you famous. It's good for the public, and I hope that everybody enjoyed it. I think that I have an advantage, and my advantage is that I do know his power. It may take a dangerous puncher like Deontay Wilder to keep me on my P's and Q's, so I'm going to cross all of my T's and all of my I's are going to be dotted, I'm looking forward to being victorious on Saturday night. Of the 30 guys, none of them is Malik Scott, and I'm taking it one round at a time. This is the Fight of The Year, and I want everybody to have their popcorn ready."

Although the 6-foot-7 Wilder recruited the 6-4 Scott as a sparring partner in advance of his first-round knockout of ex-beltholder Sergei Liakhovich in August of last year, the 2008 bronze medalist said they never broached the notion of one day being adversaries.

"This is a pleasure to be here and the place to be here. Representing my country in Puerto Rico, baby. Ain't no better place to be at, man. Beautiful island, beautiful people and beautiful weather. I'm here, baby. I'm here to perform for my fans, and to get my 31st knockout. This is definitely going to be my biggest test that I done faced. Malik has all of the attributes. He has the skills, and he has the talent, and the main thing is that he's an in-shape heavyweight," said Wilder.

"So people can definitely look forward to an athletic event. Both guys are in shape, both guys are talented, and we're going to bring it. There's going to be excitement. That's my bro, and I love him, but they say love hurts sometimes, and I'm definitely about to bring the pain. I'm Deontay Wilder on the outside, but Malike Scott is fighting 'The Bronze Bomber' on the inside, and 'The Bronze Bomber' don't take no names, he just takes heads off, baby. Bomb time."

Lopez (33-3, 30 KOs) said he expected "a difficult fight" with Ponce de Leon (45-5, 35 KOs) when their 130-pound rematch was announced earlier this month, despite having stopped Ponce de Leon in the first round for the WBO junior featherweight title in June 2008.

But a lot has changed since then for the southpaw duo whose rematch represents a crossroads bout for each of them.

The 30-year-old Caguas, Puerto Rico-based Lopez is 3-3 in his past six fights, being stopped in all his losses. Lopez was last in the ring for a fourth round knockout loss to Mikey Garcia last June.

Lopez sandwiched a second-round knockout of Mike Oliver in October of 2011 between stoppage losses to Orlando Salido in April 2011 and March 2012. Lopez had won two fights by ninth and second round knockout before facing Garcia.

A big question heading into Saturday is how much does Lopez have left?

"Of course, I have so much more to give, and you guys will see that on Saturday night. I will be champion again. I don't know if it's going to happen in the first round, but there will definitely be a knockout," said Lopez, through translation by Golden Boy vice president and matchmaker Eric Gomez.

"Puerto Rico's going to win this in a knockout. I'm here to fight and to win, and that's the most important thing. Obviously, first things first, I have to get past this Saturday, but you know, we'll sit down with Golden Boy and we'll see what's available and we'll see what's next."

A 33-year-old Mexican Olympian, Ponce de Leon was last seen in the ring earning a unanimous decision victory over Joksan Hernandez in November after having been dethroned as WBC featherweight beltholder following a ninth-round knockout loss to Abner Mares last May.

Ponce de Leon had won the 126-pound belt with an eight-round technical decision over Jhonny Gonzalez last September. "The Tarahumara Destroyer" ended a 12-fight winning streak (which included 11 knockouts) for Gonzalez, who regained the belt with a first-round stoppage of Mares last August.

"I'm very motivated. It's been a long time. I've waited for this. I'm motivated, and I'm ready to go. I'm happy to be here in Puerto Rico. [A knockout] could happen, you never know, because we both hit very hard," said Ponce de Leon, a native of Mexico, through Gomez's translation.

The manager of Luis Collazo,  Normil Lorrick, has informed RingTV.com's Tim Smith that the former welterweight titleholder could appear on the undercard of the Floyd Mayweather Jr.-Marcos Maidana card on May 3 against Amir Khan,

Collazo signed earlier this month with powerful boxing manager and advisor Al Haymon, whom Lorrick and Collazo said are is in the process of doing the same

Fighthype.com has also reported that Khan is close to signing with Haymon.

Collazo (35-5, 18 knockouts), who turns 33 in April, knocked out Victor Ortiz in the second round in January, and has called out Khan.

"I think that it would be a great fight," said Collazo, during an interview with RingTV.com earlier this month. "It doesn't matter where I fight next. But I just want to give the fans a great fight, and I want that Amir Khan fight next."