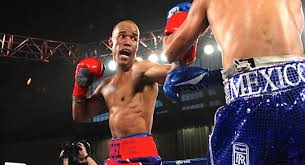 An attorney for junior lightweight Argenis Mendez  filed an appeal with Minnesota's Office of Combative Sports on Thursday to have last Friday's controversial second-round knockout loss to Rances "Kid Blast" Barthelemy in Minneapolis overturned into a no-contest, and the dethroned Mendez restored as IBF titleholder.

Although Barthelemy (20-0, 13 knockouts) had dropped Mendez (21-3-1, 11 KOs) once in the second, the knockout appeared to be the result of a punch that landed after the bell ending the final round. A flattened Mendez was counted out by referee Pete Podgorski officially at the mark of 2:59.

Copies of the filing were e-mailed to RingTV.com by Mendez's lawyer, Pat English, who appealed to Matt Schowalter, executive director of the Combative Sports Office of the Minnesota Department of Labor and Industry which governs boxing in the state.

"I think that this is a great opportunity for boxing to correct a very clear error, and I think that it will help to enhance the image of fairness in the sport, which needs enhancing," said English to RingTV.com. "I think that it's important to understand that when there is a mistake made, that there are areas of remedy, and that they should be exercised by those in power. Otherwise, people think that the sport is hopelessly corrupt."

The complaint, also filed with the IBF, contends that Podgorski "was not in position to immediately separate the fighters at the time the bell initially rang to end the round," and asks for an immediate rematch, if not, a no-decision.

Neither English, who also sent a video of the bout to Schowalter, nor Mendez's camp, is asserting that Barthelemy intentionally landed his punches after the bell.

A post-round punch is illegal under The Association of Boxing Commission (ABC) rules which state "if an accidental foul causes an injury severe enough for the referee to stop the bout immediately, the bout will result in a no decision if stopped before four completed rounds."

"We see this as a simple application of the rules to the situation. The video discloses quite clearly that the blows which knocked down Mr. Mendez were thrown after the bell had run," wrote English, in part, in his letter to Schowalter. "Of that, there can be no dispute…Mr. Podgorski erred, pure and simple. He had a bad night, with many good ones. This protest is a way of rectifying that bad night, not a condemnation."

English told ESPN.com that he expects a decision from Schowalter by Jan. 20.

Click here for a video of the Barthelemy-Mendez fight