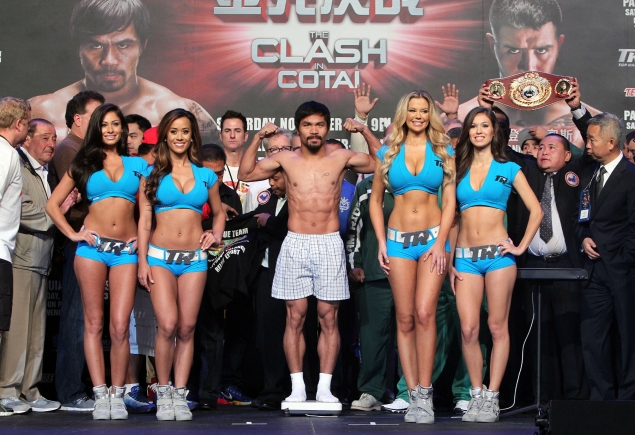 Considering that Floyd Mayweather Jr. has said that he "will never do business" with Bob Arum, Manny Pacquiao said the No. 1-ranked pound-for-pound fighter will have to wait until 2015 if they are ever to meet.

On the heels of Mayweather having dismissed rumors of a September date with Pacquiao as "a lie," the Filipino star addressed his counterpart's feelings about Arum.

"Floyd has also been saying he will only fight me if I separate from Top Rank and Bob Arum," said Pacquiao, according to an interview with Philboxing's Eddie Alinea. "That’s impossible because my contract is valid until the end of this year. If my contract is not renewed, we can only talk about a possible fight next year."

Like Mayweather, Pacquiao also denied the possibility of a fall bout, as well as rumors of a trip to meet with Mayweather in the United States.

"If it was already a done deal, is it possible for me not to know about it? I know nothing about the reports in the newspapers. I have no plan to go to the U.S. to talk to Floyd; that’s also not true…I have been saying this over and over again, I am not afraid to fight anybody," said Pacquiao.

For now, Pacquiao's advisor, Michael Koncz, and Arum are considering who will be his next opponent on April 12 at the MGM Grand in Las Vegas, having met at Arum's Los Angeles home on Saturday. The choice is likely between Tim Bradley or Pacquiao's former sparring partner, Ruslan Provodnikov.

"I just had a good meeting with Michael yesterday, and I'll leave it at that," said Arum, adding "I have a contract with Manny, and he's saying that we may very well renew the contract past 2015."

Koncz also shared about the meeting with Arum.

"I met with Arum at his house this afternoon," wrote Koncz, in a text message. Nothing is final as Manny and I are looking at all of our options."

In victory, Pacquiao rebounded from a split-decision loss to Bradley in June of 2012, and a sixth-round stoppage loss to Juan Manuel Marquez in December of that year.

Banner Promotions' President Artie Pelullo, who guides Provodnikov, said that he would prefer that "The Siberian Rocky's" next fight to be against Marquez as his first choice.

Meanwhile, Mayweather has a planned return for May, with former two-belt 140-pound titleholder Amir Khan claiming to have signed his part of an agreement to challenge for Mayweather's RING and WBC welterweight titles on that date.

There had been wide speculation that final details are close to being completed for Mayweather to face Khan at either The MGM Grand in Las Vegas or else at Barclays Center in Brooklyn.

Mayweather has also mentioned Marcos Maidana as being "in the lottery jackpot box" along with Khan to be his next opponent.

In his last fight in September, Mayweather, who turns 37 in February, dethroned Canelo Alvarez by majority decision for the RING and WBC 154-pound championships. Mayweather-Alvarez, promoted by Golden Boy, grossed a record $150 million.