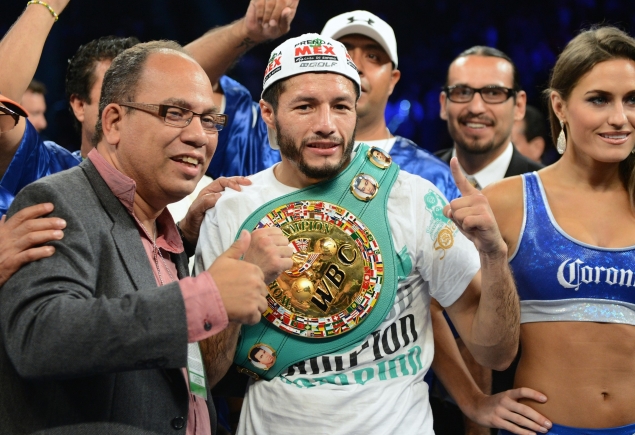 In accordance with an earlier report by RingTV.com, three-division titlewinner Abner Mares will have his requested rematch with Jhonny Gonzalez, against whom he suffered a shocking first-round knockout loss that dethroned him as WBC featherweight titleholder in August.

“This fight says a lot about both Jhonny Gonzalez and Abner Mares,” said Golden Boy CEO Richard Schaefer of Gonzalez-Mares II, which will happen on Showtime from Staples Center in Los Angeles on Feb. 15.

“Jhonny wants to leave no doubt about his first win, and Abner wanted to get another shot at him immediately. These are two great warriors and I can’t wait to see them fight again.”

Gonzalez (55-8, 47 knockouts) had appeared to be balking at the rematch clause of their first bout, but Schaefer said Gonzalez eventually agreed to the return bout with Mares (26-1-1, 14 KOs).

“Abner Mares gave me my shot, and now I’m giving him his,” said Gonzalez, who turned 32 in September. “I respect what he’s done in the ring and the heart he shows every time he fights, but I worked too hard for this to give it up now. I will keep my title on Feb. 15.”

A 27-year-old who entered the Gonzalez bout as THE RING’s No. 5-rated pound-for-pound fighter, Mares was floored twice by Mexican veteran during the first defense of the belt he won in his 126-pound debut, a ninth-round knockout of Daniel Ponce de Leon.

Ponce de Leon was the last man to defeat Gonzalez in an eighth-round technical decision in September of 2012, that ended Gonzalez’s 12-fight winning streak which included 11 knockouts.

“I’d like to thank Jhonny Gonzalez for this opportunity. It will be an honor to fight him a second time,” said Mares. “August 24 was his night, and I take nothing away from him, but February 15 will be my night, and I’m going to get my title back.”

Schaefer had earlier mentioned that he would also work  on having the Gonzalez-Mares card be supported by WBC junior featherweight beltholder Leo Santa Cruz, who is coming off last Saturday’s unanimous decision over  Cesar Seda.

“After the most unexpected upset of 2013, Jhonny Gonzalez and Abner Mares will meet again in one of the most highly anticipated matchups of the first quarter,” said Stephen Espinoza, executive vice president and general manager, Showtime Sports.

“Any time you put two Mexican warriors like Abner and Jhonny in the ring together, you can expect an action-packed fight. This is the type of fight that our Showtime viewers have come to expect, and Feb. 15 will undoubtedly deliver.”