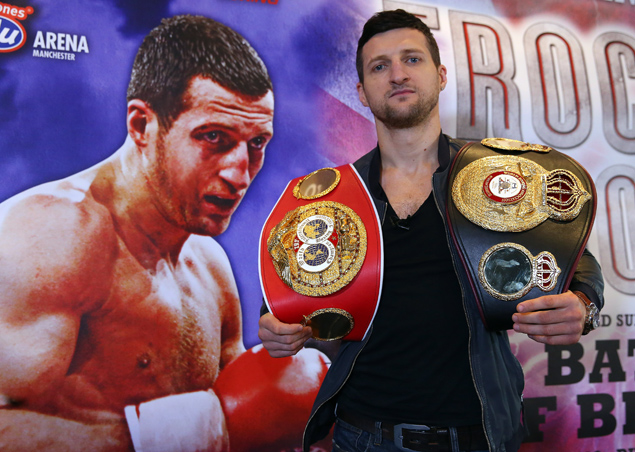 IBF super middleweight holder Carl Froch has warned that George Groves is heading for big trouble this Saturday in Manchester, England, with the promising career of the unbeaten challenger in danger of being brought to a crushing end.

We knew already that these two Englishmen did not get along. However, listening to Froch’s vicious declaration of intent on Monday, following a public workout on the pads in his home city of Nottingham, it appears the animosity between them grows with every passing hour in the countdown to their eagerly-anticipated grudge blockbuster.

For having been calm, cool and collected in the extreme – for all of two minutes – in a live afternoon interview with Sky Sports News, four-time beltwinner Froch, without provocation, began to let rip with a barrage of forthright predictions on how the action will unravel come the weekend.

The measured yet menacing message was simple. Groves (19-0, 15 knockouts) will suffer a punishing knockout at the sold-out 20,000-capacity Phones 4 U Manchester Arena, one so savage it may result in the west Londoner’s permanent decline as a contender in the division. Froch, who also holds a ‘regular’ WBA title, stated we need only look at what has happened to some of his other previously-undefeated victims to appreciate why.

“I am taking it very, very seriously and George Groves is in a world of trouble and he’s going to get an absolute shock on Saturday, ” said 36-year-old Froch, aka ‘The Cobra’. “I am not only going to beat him, I am going to beat him in spectacular fashion and potentially end his career. He’s not going to see that one coming.

“There are many fighters who have got into the ring against me unbeaten. I am not going to list them but there have been some big names. After I beat them some have gone on to win world titles but others don’t want to get back into the ring, they don’t want to fight again and they retire because I have knocked them totally for six. We will see how Groves deals with the loss but it will be devastating for him.

“This is the week where I switch on and focus on beating Groves. That’s why I am talking so seriously. My motivation is my titles, my legacy and this arrogant, disrespectful and downright rude person. I don’t like that. I have the chance to put the record straight and put that right. There’s no better job for me, or more satisfying, than to give George Groves a pasting.”

Whichever side of the fence you may sit, there is no question Groves, 25, has been portrayed as the bad guy in the build up to this all-British scrap, and that Froch has jumped all over the idea his countryman should be a little less obnoxious and rather more respectful.

All hype to increase pay-per-view take up in the UK via Sky Box Office? Not a chance, insists Froch. An inevitable response, for sure. But when his respected long-time trainer, Rob McCracken adds weight to the war of words, recalling a particular incident involving Groves at the end of Froch’s triumph over then IBF titleholder Lucien Bute in May 2012, you just know the hatred is authentic.

“Groves has definitely motivated me, which is great,” said Froch (31-2, 22 KOs). “If he’d been humble and more appreciative of his chance against the champ I might have taken my foot of gas in training because I’d be thinking the guy knows he hasn’t got a chance. But his childish, arrogant, immature attitude has given me that extra bit of motivation to grit the teeth in training and make myself that little bitter fitter and sharper on the night. Groves has done himself an injustice.

“This is his big shot and his big chance. Does he deserve it? Obviously he does because he’s next in line for the IBF title, which is the one I really care about. The WBA have a champ in Andre Ward, which is another fight I want – a rematch to set the record straight. Over in England. But it’s one fight at a time and I’m only looking to Saturday. I just hope the referee doesn’t jump in early, and that I don’t knock him out too early because once I start hitting his glass jaw, he is going to struggle to withstand the pressure and the pain. I hope he’s been training hard and his legs are strong. When I do connect I don’t want him to fall over straight away.

“I’d like it to go six to eight rounds. From the fans’ point of view, they deserve a good night. It’s on Sky Box Office, people have to dig deep into their pockets but that’s the only way these big fights can happen. People can choose to tune in or they can wait for the result. But those tuning in, trust me, are going to be getting their money’s worth because I am in a ferocious mood.

“I can’t wait to serve a whooping on Groves. I am not trying to sell it. I am going to do a job on Groves. A nasty job. I’m going to punch him for the fans’ viewing pleasure because I don’t hear any punter backing him. But now I am getting emotionally involved and in the zone, which I don’t want to doÔÇª”

All of which left it to McCracken, instrumental in each and every Froch rise to the top, to deliver a few choice comments regards the unpartisan behaviour of Groves in the immediate aftermath of the Bute fight.

“When Carl beat Bute, Groves was devastated,” McCracken told Sky Sports News. “That was a pretty poor show considering Carl was a British fighter against an international superstar who was expected to beat him. Bute was a huge name at the time. But Groves was gutted ringside and his face said it all.

“I remember Carl pointing it out to me in the ring – Groves looked sick that Carl had won. So there’s a bit of bad blood there and then you add to that all of Groves’ comments. But like I’ve been saying all along, none of it is coming from Carl. None of it.”