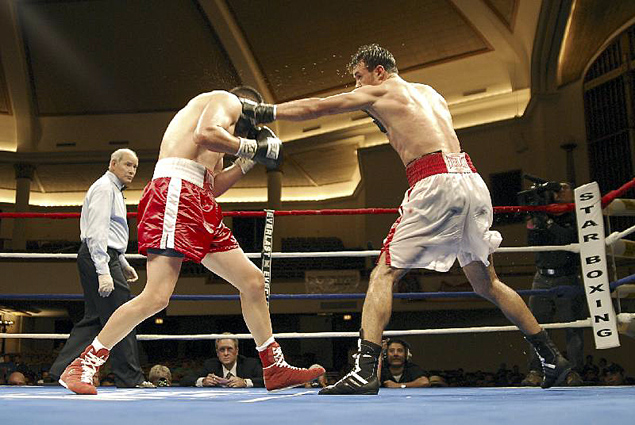 The recent death of Francisco Leal and hospitalizations of Hernan Marquez and Magomed Abdusalamov, who is currently fighting for his life, triggered memories of the Delvin Rodriguez-Oscar Diaz fight for Lee Groves, who questioned his lifelong love of boxing when Diaz (left) was hospitalized after being stopped by Rodriguez (right) in 2008.

Over the past several weeks, those who love boxing have been forced to confront the darkest realities of their favorite sport.

As of this writing Abdusalamov is fighting for his life, for he suffered a broken hand, a fractured nose and a swollen cheekbone in the ring, after which he underwent surgery to remove a blood clot, was placed in a medically induced coma and suffered a stroke after his body temperature soared to 104 degrees. He is now on life support and though he is listed in stable condition his prospects for survival remain touch-and-go.

This series of events is enough for even the most ardent boxing fan to question his love for the sport. Those of us who have invested decades of passion are forced to answer queries usually posed by skeptics: How can you derive enjoyment from the suffering of others? Why do you follow a sport where injuries and scars are commonplace and the possibility of post-career trauma and death remains ever-present? What possesses you to continue to love something so savage?

These are questions I’ve faced throughout my nearly 40 years as a boxing fan and those sentiments were never more strongly felt than on July 16, 2008 when I witnessed the single scariest sight I’ve ever encountered at ringside. 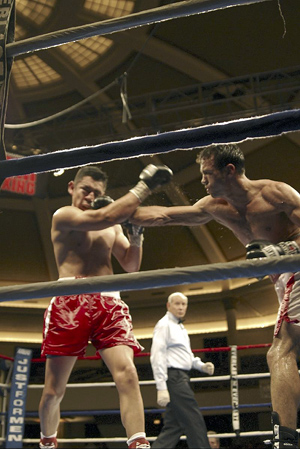 The main event inside San Antonio’s Municipal Auditorium pitted Connecticut-based Dominican Delvin Rodriguez and hometown hero Oscar Diaz for the vacant USBA welterweight title. It was a classic crossroads encounter as each man was two fights removed from defining KO defeats before their respective home crowds. Rodriguez’s was a shocking eighth round loss to Jesse Feliciano at Foxwoods while Diaz’s was a grueling 11th-round TKO to Golden Johnson at the Alamodome. Much was on the line for both: A victory meant a move up the ladder while defeat would force them to rethink their place in the sport.

For the first seven rounds Rodriguez’s long-range boxing and Diaz’s relentless aggression meshed well. Rodriguez’s sharp-shooting allowed him to build a working margin on the scorecards as well as lump up Diaz’s face but it wasn’t enough to dampen the Texan’s fighting spirit. Diaz’s best moment came in the fourth when his overhand right staggered – and nearly floored – Rodriguez but after that Rodriguez found the range with pinpoint rights that connected with thudding flushness.

Starting in round nine, Rodriguez’s dominance became more pronounced as he methodically picked Diaz apart with frequent strikes that slowed “El Torito’s” charge. Diaz’s right eye was a slit and the chants of “Oscar! Oscar!” that reverberated during earlier rounds were reduced to murmurs.

Rodriguez continued to peck away at Diaz’s swollen eye in the 10th with jabs and hooks and a decision victory appeared inevitable. Diaz, as always, plowed forward with determination and while he lost the round he didn’t do so lopsidedly. Although Rodriguez had out-landed Diaz 41-19 in the final two rounds, nothing could have prepared anyone for what happened moments later.

Between rounds 10 and 11, Diaz unexpectedly arose from his stool and turned toward the audience instead of taking full advantage of the rest period. Referee Bobby Gonzalez asked Diaz if he was OK and he could only respond with a guttural growl. His legs then buckled, prompting Gonzalez to wrap his arm around Diaz’s torso and immediately wave off the fight.

The paramedics jumped into the ring to tend to the groaning Diaz, who was clutching the side of his head. When Diaz’s body nearly fell off the stool the medical personnel wisely had him stretch out on the canvas so they could more easily tend to him. His legs convulsed briefly, after which he was given oxygen and led out of the arena on a stretcher.

From the safety of home I had read about and watched the grim procession of fighters who succumbed to ring injuries: Brian Baronet, Willie Classen, Cleveland Denny, Francisco “Kiko” Bejines, Jimmy Garcia, Stephan Johnson, Leavander Johnson, Deuk Koo Kim, Johnny Owen, Beethavean Scottland, Bobby Tomasello, Young Ali, Jacob Morake, Angelo Jacopucci and Yo Sam Choi among them. While I felt sadness for them, their families and 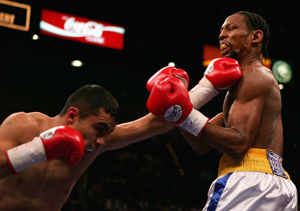 for the effect their deaths had on the sport’s image, the distance offered a layer of protection. Up to that point, the closest proximity I had to those incidents was when I interviewed then-IBF lightweight champion Leavander Johnson by phone just days before his 11th round TKO loss to Jesus Chavez in September 2005.

The unsettled feelings in the wake of Johnson’s passing were dwarfed by what I experienced that night in San Antonio. As I walked around ringside and surveyed the aftermath, I alternated between praying for Diaz’s safety and struggling with the fusion of shock, anger, guilt and hope that swirled around my brain. I dealt with the pain the only way I knew how – by writing.

Over the next several hours in my hotel room I channeled my angst into an article for MaxBoxing.com entitled “Boxing’s Darkest Reality” in which I merged the fight with my earlier visit to the Alamo, where a good-bye letter by the soon-to-be-executed R.H. Dunham to his mother particularly stood out. Dunham faced his fate with the same unwavering faith and bravery that boxers must exhibit every time they step inside the ring. They must shunt aside the very real danger they’re courting in favor of focusing on the ultimate prize – victory. That requires a mindset that few of us can fathom, much less understand.

All of us who worked that ESPN Wednesday Night Fights telecast eagerly awaited news about Diaz’s condition. For the next several weeks Diaz occupied a prime spot in my daily prayers as he waged his silent war. Following a two-hour craniotomy, the swelling around Diaz’s brain receded but he still was placed in a medically-induced coma that eventually lasted two months. The news that Diaz was awake and breathing on his own was a source of joy and relief, but before I experienced that emotional release I still had to deal with the doubts his fight with Rodriguez had spawned.

In order to restore my unconditional love for boxing, I needed to wrench myself away from the immediate crisis and examine the issues from a more comfortable distance. First and foremost, in recent years the sport’s regulators have mandated measures to improve ring safety such as having at least two ringside physicians and an ambulance present at every card. While those rules couldn’t spare Leal, they gave Diaz, Marquez, Abdusalamov and many others at least a fighting chance once they reached the hospital.

Second, I took comfort in the fact that ring deaths are extremely rare when one considers the thousands of fights that are staged worldwide each year. According to Joseph R. Svinth’s exhaustive study, boxing deaths have fallen from a peak of 233 in the 1920s to 117, 97, 83, 84 and 103 from the 1960s through the 2000s. While one death is one too many, the relatively low totals reflect the advances in medical science and the increased attention to safety before, during and after matches. Additionally, boxing consistently rates below football, horse racing, hockey, soccer, motorcycle racing, skiing, lacrosse, baseball, cycling, bull riding and even cheerleading on lists detailing the most dangerous sports. On one list, boxing ranked 11th while on the rest it didn’t even merit a mention. That, in my eyes, is great progress.

Third, I realized the good far outweighs the bad when it comes to boxing. While the sport continues to groan under the weight of jurisdictional chaos, politically-motivated shenanigans, petty promotional cold wars, mainstream media ignorance and logic-defying decisions, the action that unfolds inside the ring remains the purest of one-on-one confrontations. Boxing’s simultaneous physical and psychological drama is unlike that of any other sport and the characters that occupy the industry are among the most compelling that can be found anywhere.

Finally, I came to realize that turning my back on boxing would cause me to abandon my very identity. Ever since March 16, 1974, when an energetic eight-year-old saw Roberto Duran’s 11th-round knockout of Esteban DeJesus on ABC, boxing had been my passion as well as the marker that set me apart from everyone else. I also tried to channel the sport’s ideals into my daily life. I strove to emulate the courage, determination and ambition I saw on TV every week and in my own way I felt I had succeeded. The desire to excel in every area of my life was ingrained in me and while I experienced more than my share of failures I also enjoyed achievements that defied the odds. The fact that I successfully transitioned from a 17-year tenure as a newspaper copy editor to a multi-faceted career in boxing journalism starting at age 42 is a testament to the example those fighters showed me as well as to the people who helped open the necessary doors.

Once I weighed the pros and cons, the conflict that raged within me vanished. When that happened, I knew I was a boxing man through and through and nothing – not even injury or fatality – would shake my resolve. That conviction would be tested when I witnessed Deontay Wilder’s frightening KO of Sergei Liakhovich earlier this year, but while I was temporarily disturbed by what I saw my overall regard for boxing remained unshakable.

Because boxing is an inherently violent sport, it’s almost inevitable that every fan of long standing will confront their own crisis of confidence. When that happens, it’s up to each person to examine his conscience and decide whether continued devotion is worth the price. My date with destiny came that night in San Antonio and I’m happy to say I emerged with my enthusiasm for boxing intact. While I’ll mourn for Leal, rejoice in Marquez’s quick recovery and pray for Abdusalamov to pull through, I’ll also continue to fervently follow, support and chronicle this sport I love.