Darchinyan: ‘I made Donaire, and I will break him’ 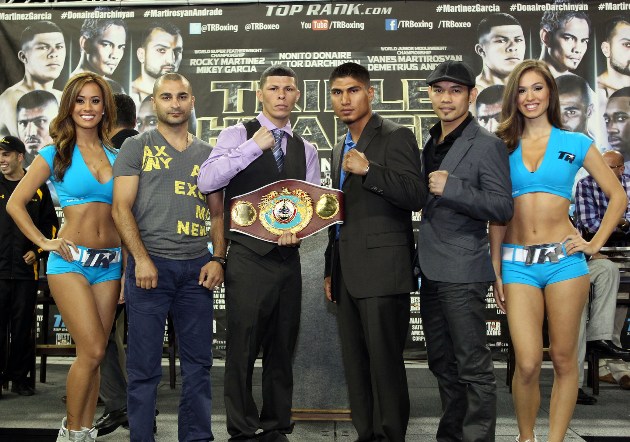 Vic Darchinyan was an unbeaten IBF flyweight titleholder in July of 2007 when a counter left hook by Nonito Donaire dropped and stopped the Armenian for a fifth-round knockout.

“Since years ago, I lost to Nonito Donaire. No one knew about him at that time. I made Donaire, and I will break him. You will see,” said Darchinyan during a Wednesday press conference at The American Bank Center.

“This is a very important fight for me. It gives me the opportunity to face and defeat an opponent who beat me in the past. This win will be sweet revenge for me.”

Darchinyan has won two straight since losing consecutive unanimous decisions to Anselmo Moreno and Shinsuke Yamanaka, and is coming off a fourth-round stoppage win over Javier Gallo in May.

Donaire, meanwhile, is looking to rebound after having been dethroned as RING 122-pound champion and WBO beltholder in his last fight in April by Guillermo Rigondeaux, who also holds the WBA title.

“Just this fight alone, there’s already a lot of tension, as you know. ‘I will make him, I’ll break him?’ That’s from Darchinyan. I expected as much from Darchinyan. I thought that age would subside a little bit of his issues, but apparently not, which is why I say that this fight is going to be an incredible fight,” said Donaire, who will turn 31 on Nov. 16.

“I’ve taken everything away from him. Everything that he has worked for all of his life. I’m looking forward to this fight, because I know that I will see a guy who is determined. A man who is out there for everything that he wants back, and I was that guy who took it from him.”

“This fight is a great opportunity to clear any doubts about my value as a world champion,” said Martinez. “A win over Garcia will prove that I am a real champion, and it will take me to the next level.”

A Mexican-American boxer-puncher from Oxnard, Calif., Garcia, 25, is coming off January’s eighth-round technical decision over Orlando Salido, which was followed by June’s fourth-round stoppage of former titleholder Juan Manuel Lopez.

“I’m fighting a defending champion,” said Garcia, who was overweight prior to his contracted 126-pound bout with Lopez, costing him his WBO belt at the scales. “It won’t be easy, but I think I have all the tools to beat Rocky. I want to be champion again, and Rocky is in my way. I will become champion again.”

“I just can’t wait to get into the ring and prove how badly I want this. I have been training very hard, and have a great game plan with [trainer] Freddie Roach,” said Martirosyan, who is 27.

“A lot of one-on-one with Freddie, combined with great sparring and training along with the likes of Miguel Cotto and George St. Pierre. That has been very inspirational and motivating. Andrade is a great fighter. I hope he is ready to go to war. We are on HBO, and I plan on stealing the spotlight that night with a very exciting and entertaining win for the fans.”

“I always wanted to be champion of the world, and on Nov. 9, I will be crowned champion. I wanted to win an Olympic gold medal, and since they took that from me, I am going to take this world title,” said Andrade.