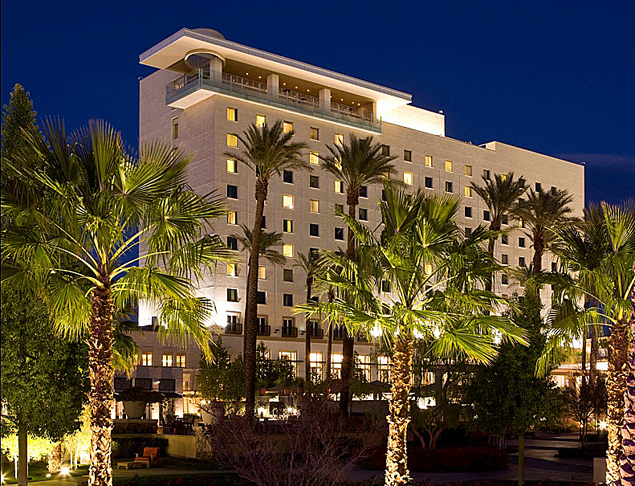 I can’t remember the last time I worked two consecutive shows at the same venue, but such was the case when I got word I’d be returning to Indio, Calif. for the second time in a month. This time, I was to count a Showtime Championship Boxing card that featured two intriguing crossroads fights between featherweights Rafael Marquez and Efrain Esquivias as well as heavyweights Chris Arreola and Seth Mitchell.

Because each man’s strengths and weaknesses are apparent and exploitable by each party, a tumultuous fight night was likely. As much as I would have enjoyed an action-packed evening at the CompuBox keys, I hoped the action wouldn’t include unpleasant events at the airport or, worse yet, in the air.

That’s what happened last time I was assigned to travel to Indio and unlike the climate in Hollywood these days I wasn’t up for a sequel.  For those who didn’t catch my last two-part Travelin’ Man, here’s a synopsis of what happened before and during my outbound trip:

I believed my troubles from my outward leg were long gone. After all, nearly a month had passed. But when I checked the mail this day I received a letter with an Avis letterhead. It was from their collision investigations department.

Enclosed was a form seeking further information regarding damage my rental vehicle apparently sustained during the time it was listed under my name. Along with blanks asking for various facts, it also included a diagram where I could pinpoint damaged areas and explain how they got there.

I had no idea what they were talking about. The vehicle was in my possession for a little more than two hours and despite the exasperating circumstances under which it was rented the driving part was very pleasant and trouble-free. My guess was that something must have happened during my car’s return to Los Angeles, so I called the number listed on the letter and told them my story.

I must have sounded believable to her – I was telling the truth after all – because she advised me to send her an e-mail so she could continue her investigation. Five minutes after doing so I was off to the airport.

From the very start, the differences between last month and today were bold and luminous.

This time, the weather was beautiful – abundant sunshine, temperatures in the mid-70s and a hint of coolness that foreshadowed autumn’s arrival. Also, today’s itinerary was one of my choosing – Pittsburgh to Phoenix and Phoenix to Palm Springs – and my connection window was more comfortable. My fellow motorists were well-behaved because there were no serial tailgaters or severe slow pokes, and before I left I moved about with my customary dexterity. I even got lucky in terms of finding a parking space in the extended stay lot, for I witnessed the previous occupant pulling out just as I approached. I reached the head of the security line within 90 seconds and during my brief wait I noticed on the giant overhead flight monitor two most welcome words – “on time.”

The good vibrations kept coming. My punch-counting colleague Joe Carnicelli told me via e-mail that Showtime had changed the location of our crew hotel. He included three facts worth knowing: (1) it represented an upgrade from our previous lodging in terms of grandiosity and amenities; (2) it was located closer to the Fantasy Springs Casino, where the fight card was to be staged; and (3) the surrounding restaurants were far more expensive than was the case last month, so if you dare choose to dine be prepared to bring the Big Boy Wallet.

He ended the note by stating that he’d be picking me up at the airport in his rental car, saving me an approximately $40 cab fare. That’s my man Joe, always looking out for his co-workers.

The good omens continued to flow. I reached a good stopping point in my writing just as the boarding announcement was made in Pittsburgh and a moment before I shut down my laptop I received an e-mail that my land line phone was working for the first time in two days – apparently lightning had struck the box and rendered the line inoperable. Unlike my outbound flight last month, my seat was located on the aisle just two rows behind first class, so if I needed to make a quick getaway to reach my connecting gate I would be more likely to do so.

I also hit pay dirt in terms of seat mates. Two seats to my right sat a blonde, smoky-voiced twenty-something version of Chelsea Handler who was flying to Phoenix to serve as her sister’s maid of honor. What’s more, not only was she attractive, she also knew sports because in a previous professional life she was a waitress at a sports bar. The recent Arizona State grad was just days away from a job interview with IMG and she hoped someday to be in sports broadcasting. As we chatted, she clutched a stuffed Curious George toy, a gift she called Alejandro because the recipient, a previous boyfriend, was half-Spanish.

Our conversation was interrupted by the arrival of our middle-seat occupant but he ended up leaving a few minutes later because of a rare announcement by our flight attendant.

“For those of you who want to spread out, there are some aisle seats available,” after which she detailed their locations. The Middle Man took his leave and “Chelsea” and I chatted for a few more minutes before she settled down for some rest.

Just before takeoff, our pilot said that aside from some rough air above St. Louis our flight was expected to be without turbulence. Even better: He anticipated that we would land in Phoenix a full 35 minutes ahead of schedule, which virtually guaranteed I’d make my connection with ease.

All was well. In fact, this day couldn’t have started any better.

Even so, my Travelin’ Man Instinct refused to let me lower my guard completely. Too many times the Travel Gods presented a flawless preamble only to conjure a cruel twist of fate. As I worked through those consequences I could almost hear them laugh with glee.

“We got him again,” they’d say between guffaws. “And now let’s watch him squirm.”

About an hour before we landed, the pilot informed us that thunderstorms in the Phoenix area would force the plane to assume a circling pattern that would last approximately 15-20 minutes but wouldn’t prevent an on-time touchdown. He also told us to expect turbulence on our descent.

Both things happened, but the turbulence wasn’t nearly as bad as the pilot painted it. The plane landed at 6:50 p.m. and I texted Joe that I had arrived safe and sound.

“OK,” he replied. “Wind has died down and weather has cleared. See you in lobby at (Palm Springs) airport at 9 p.m.”

As soon as I finished reading Joe’s message the Travel Gods began to toy with me – but only a little bit.

My original departure time from Phoenix was 7:55 – I had that beaten that time by a ton — but as soon as I settled into my seat at the gate I noticed the old-school gate sign with cardboard letters and numbers convey the words “delayed” and “8:25.” The weather that Joe referred to – mostly sand storms – had kicked up again and caused the plane that was to shuttle us to Palm Springs to remain there for an undetermined amount of time. I sent a text to alert Joe about my altered plans.

Before I knew it the timeline changed again. This time the card indicated an 8:55 p.m. departure as the high winds continued to batter Palm Springs. I apologized to Joe for the extra long wait.

“OK, I’ll hang on a while longer,” he replied. “If it goes at 8:55 you should be here at 10. Any more delays and you may be staying in Phoenix tonight. Planes are landing, though.”

Joe had a welcome diversion – he spent an hour talking with a former MLB player who was waiting to meet his wife’s flight.

The weather finally died down in Palm Springs, allowing my plane to get to Phoenix before “last call.” I settled into my aisle seat in row three and at 9:52 my final flight of the day touched down. Just as Joe said I met him precisely at 10 p.m.

Because of the fluid situation in Phoenix I didn’t wander away from my gate long enough to get something to eat. I asked Joe if there were any places on the way to the hotel and he said aside from a McDonald’s most of the available fare occupied the high end. So McDonald’s it was.

I felt a bit self-conscious about walking into a ritzy hotel carrying a bag of fast food, so once we found a parking space I stuffed the bag inside my laptop carrying case while trying my best to drink my soda fast enough to empty it but not so fast that I’d give myself “brain freeze.” I got the worst of both worlds; I didn’t finish the drink and my brain froze anyway.

I arrived at my room precisely at 11 p.m. and as I munched on my late-night meal I caught up on all the sports news I missed in transit – among them a perfect game bid that ended with two outs in the ninth inning, my Pittsburgh Pirates losing the first game of a three-game showdown with the second-place St. Louis Cardinals and Serena Williams crushing Li Na to earn a spot in the U.S. Open final against second-seeded Victoria Azarenka (whose matches I have to watch with the sound down because of her incessant howling on every shot).

As always, the excitement of travel day required a long winding-down process and as a result I didn’t turn out the lights until 2:30 a.m., or 5:30 a.m. body clock time. I had planned to stay on East Coast time throughout the trip to mitigate any fatigue I’d feel before my early-morning flight on Sunday, but all that went out the window. Such is life for boxing’s Travelin’ Man.