Nonito Donaire Sr. says that he and his son, three-division titleholder Nonito Donaire Jr., have reconciled their differences after several years of separation.

In an interview with respected Filipino sports journalist Dennis Principe of Solar Sports, Donaire Sr. said that his son reached out to him recently, asking the father to meet with him and his wife Rachel at their home in Las Vegas.

“I visited his place and we spent five hours together,” said Donaire Sr, who finally got to meet his two-month-old grandson Jarel. “As a father, I felt very good that we saw each other again.”

The pair split acrimoniously in 2009 following a public spat that played out through the media. Donaire Sr. says that “Jun,” as his son is known, has asked him to re-join his team but wouldn’t specify in what capacity. 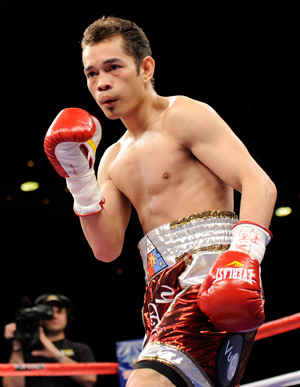 “I asked them to forgive me and to forget the past. They also said they were sorry. Right now, everybody is very happy that everything is well with the whole family.”

Donaire Jr. (31-2, 20 knockouts) couldn’t be reached for comment at time of publishing.

Donaire Sr. led his son to his first world title in 2007, when he sprung THE RING magazine’s Upset and Knockout of the Year with his five-round KO victory over Vic Darchinyan to win the IBF flyweight title.

Donaire Jr. moved on to train with Dodie Boy Penalosa Sr. and Carl Penalosa, before settling with the Boxing Writers Association of America (BWAA) Trainer of the Year for 2013 Robert Garcia. Donaire has since won titles at 118 and 122 pounds.

In an international text message, Garcia told RingTV.com that he welcomes Donaire Sr. back into the inner circle.

“I am very happy that they started talking again,” Garcia said. “They accomplished great things together and this is the best thing that could happen to both.”

The reconciliation comes at an ironic time, as Donaire Jr. prepares to face Darchinyan for a second time on Nov. 9 at the American Bank Center in Corpus Christi, Tex. A press conference to announce the bout will take place on Wednesday at said venue.

It’ll be Donaire Jr.’s first bout at featherweight, and his first fight since losing a decision earlier this year to Guillermo Rigondeaux in New York.