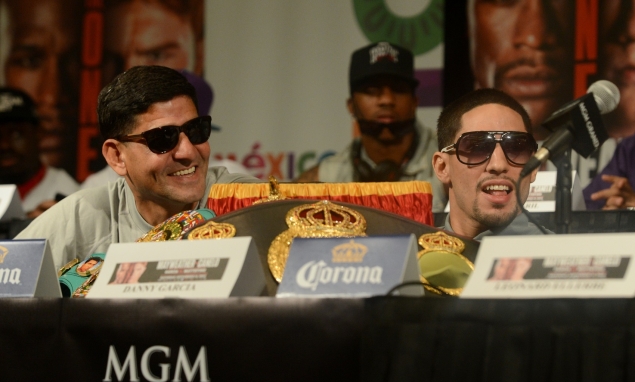 LAS VEGAS — Angel Garcia treated Thursday’s final press conference like he has every other one in the past: as an opportunity to champion his son, RING junior welterweight champ Danny Garcia.

A 25-year-old boxer-puncher from Philadelphia, Danny Garcia (26-0, 16 knockouts) will put his WBA and WBC belts on the line against RING No. 1-rated 140-pounder Lucas Matthysse (34-2, 32 KOs) on Saturday night on Showtime Pay Per View.

Angel Garcia spoke before a large gathering of reporters at the Studio A&B at the MGM Grand, site of the clash which is on the undercard of the Floyd Mayweather Jr.–Canelo Alvarez main event.

“Danny was meant to fight. Danny was born to do this. This is not something that we went to the gym and we decided to work. This was meant to be for Danny,” Angel Garcia said of his son, who is in his ninth appearance in Las Vegas and his fifth at the MGM Grand.

“Danny’s sacrificed a lot of his youth. It took a lot of his childhood away. Danny was meant to fight, and I was supposed to keep him focused. The only reason I do what I do, and I don’t do it just to sell tickets, is that I do it to defend my son.”

Back in 2006, however, Angel Garcia wasn’t quite sure that he would be able to live any longer, let alone talk, as a result of a nearly lost battle with throat cancer.

“I was dying. They gave me six months to live. I went through chemotherapy and radiation. That was hell, but I never gave up. It was for them. My four children that I’ve got,” said Angel Garcia, who eventually recovered and went into remission.

“I could never see another man raising my kids. I could never see that. The way that I look at it now is that God saved it for a reason and that’s to be Danny’s voice in boxing and to change a lot of s__t that’s going on in boxing. God saved my voice for him.”

So Angel Garcia was back at it on Thursday for Danny Garcia, who has defeated six straight current or former titleholders over a span of two years starting in April of 2011.

“He’s the one who has got to prove himself. Look at Danny. He’s calm. Look at his face. A pretty, clean-looking kid who is soft-spoken. But when Danny gets into that ring, you’ll see the personality go from young boy to a lion. Danny’s the champ of the world.” 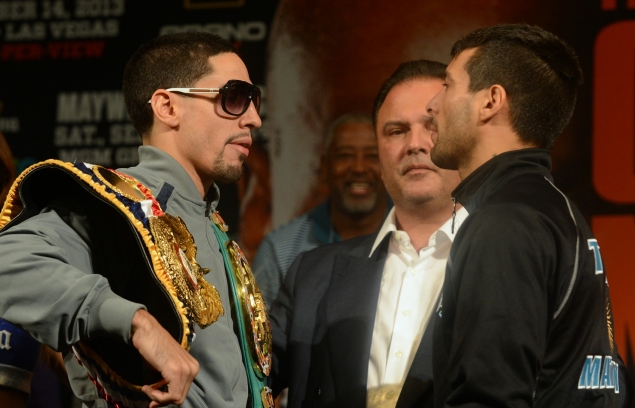 DANNY GARCIA: ‘I DO EVERYTHING BETTER’ THAN MATTHYSSE

Matthysse is 4-2 with four knockouts against six current or former titleholders, having floored all of them. The Garcias were ringside in May when Matthysse scored three knockdowns during a third-round stoppage of IBF 140-pound beltholder Lamont Peterson for his sixth straight stoppage victory in a non-title bout.

“I’ve got power, he’s got power. But it’s all about using your power in the right way and setting it up right,” said Danny Garcia, who scored a unanimous decision over former lightweight titleholder Nate Campbell at the MGM Grand in May of 2011, and a fourth-round stoppage of Amir Khan last July at the Mandalay Bay Hotel.

“I feel like I set up my power better. I feel like I do everything better. Counter-punching, speed, my punches are tighter. He’s going to see a better Danny Garcia come Saturday night. I’ve been hit by big shots before, but I know how to take a good shot. You’ve got to be prepared, and the same thing for him.”

During his last fight in April, Garcia scored an eighth-round knockdown on the way to a unanimous decision over ex-beltholder Zab Judah, whom Matthysse dropped in the 10th round of a 12-round split-decision loss in November of 2010.

Garcia was 15-0 with 10 knockouts when he earned a split-decision over Ashley Theophane, who will face Pablo Cesar Cano on Saturday’s card. Garcia has also overcome ex-beltholder Kendall Holt by split-decision in October of 2011, and scored a fourth-round knockout four-division beltwinner Erik Morales in March of last year.

“I’m comfortable, but I feel like this is my last fight at 140. There’s no one else for me to fight,” said Garcia. “After this fight, I’m definitely going up in weight. I have nothing left to prove after this fight at 140. I’ve fought everybody. I don’t have no specific rival.” 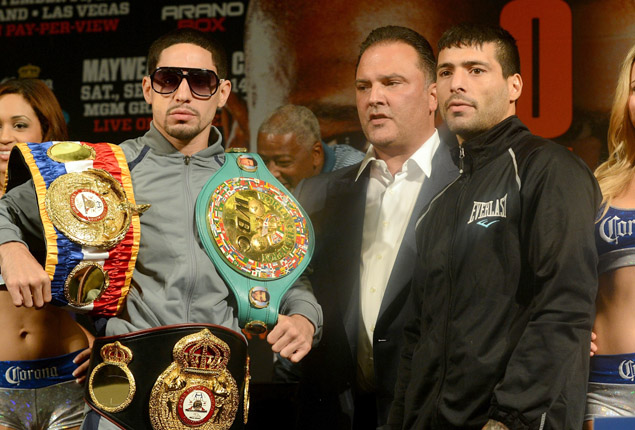 Golden Boy CEO Richard Schaefer said that welterweight contender Marcos Maidana and WBA 147-pound beltholder Adrien Broner will be in Las Vegas this week toward negotiating a clash between the two likely in December on pay per view from the MGM.

Like Broner and Maidana, Garcia is advised by Al Haymon. Asked if Broner represented a potential opponent if each is victorious in his next fight, Garcia responded to the negative.

Matthysse spoke to RingTV.com about his sparring with WBO 147-pound beltholder Tim Bradley, which he said began late last month and was to end on Sept. 6.

“We went to train at the Indio boxing club,” said Matthysse, who is in pursuit of his seventh straight stoppage against Garcia. “We were asked by [Bradley’s trainer] Joel Diaz. We offered to help him, he offered to help us. It was great sparring.”

In his last fight, Bradley (30-0, 12 knockouts) rose from a 12th-round knockdown to secure a unanimous decision over Ruslan Provodnikov in defense of the title he won by split-decision over Manny Pacquiao last June.

Although Bradley acknowledged having suffered from slurred speech for a time from the damaged suffered against Provodnikov, but Matthysse said he saw no evidence of that during their workouts.

“No, not at all. I didn’t see any of that. We did four rounds very fast. Timothy Bradley is very fast, very agile, like always…We worked hard, we worked very good together. We worked together mutually,” said Matthysse.

MATTHYSSE IS ROOTING FOR ALVAREZ

Ask what he thought of the Mayweather-Alvarez fight, Matthysse said he was rooting for Alvarez.

“I see a very difficult fight for both of them,” said Mattthysse, “and I would like that the winner would be Canelo.” 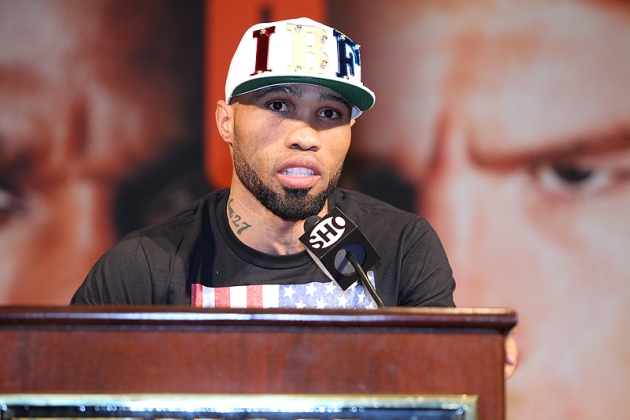 Junior middleweight beltholder Ishe Smith (25-5, 11 knockouts) is a 35-year-old Las Vegas resident who has gone from nearly committing suicide to signing with Floyd Mayweather’s promotional company and winning the IBF title in February with a unanimous decision that dethroned Cornelius Bundrage. On Saturday, Smith will make a defense against Carlos Molina (21-5-2, 6 KOs).

But during his turn at the podium on Thursday, Smith expressed his support Golden Boy President Oscar De La Hoya, about whom news broke on Tuesday that he would miss Mayweather-Alvarez because he will be in rehab to address ongoing problems with substance abuse.

“We all have differences. We may not all see eye-to-eye, but at the end of the day, we’re all human, and you’re all my brothers and sisters,” said Smith.

“So please pray for Oscar De La Hoya, and that he gets through this, and that he comes back healthy. Like I have said, I’ve been there, and I’ve dealt with the things that he’s had to deal with. I’ve had my own personal demons. Oscar’s been a great champion and he’s brought a lot to this sport. So please, pray for him.”

Meanwhile, Smith will enjoy the home court advantage in addition to being a member of Mayweather’s promotional team.

“You don’t focus on advantage. You don’t focus on any kind of hometown advantage. The judges have to judge, and the fighters have to fight. The referee has a job to do. You can’t depend on those things. You have to go out and fight the best fight. K-9 was at home, and I took his title. All of that’s good. Being part of Mayweather Promotions, they helped me to get here,” said Smith, who beat Bundrage in the latter’s home town of Detroit.

Schaefer announced that the Mayweather-Alvarez fight has eclipsed the record gate of with $20,003,150, surpassing that of $18,419,200 set by Mayweather’s split-decision victory over De La Hoya in May of 2007.

Golden Boy matchmaker Robert Diaz made a bold prediction upon reading The Experts’  picks on Mayweather-Alvarez. Of the 41 boxing insiders polled, 37 believe Mayweather will be victorious compared to four for Alvarez.

“I believe you forget to include us for opinions,” said Diaz. “Regardless, I will go on record to say Floyd will stay on his stool after 10 and Canelo wins.”