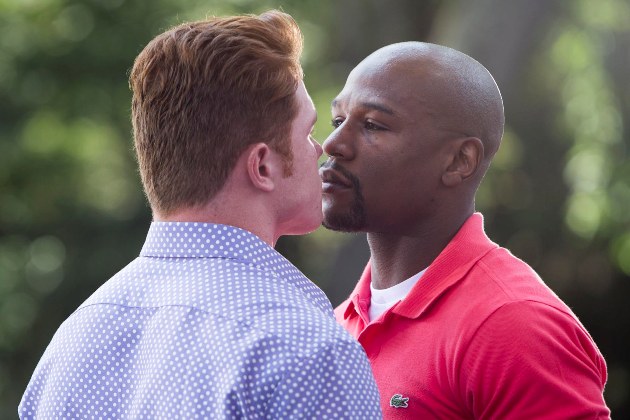 LAS VEGAS — When it came to sparring in preparation for Saturday’s defense of his RING junior middleweight championship against Floyd Mayweather Jr., Mexican star Canelo Alvarez found that smaller was better.

Alvarez said that lightweight Karl Dargan (13-0, 7 knockouts) and junior welterweight Keandre Gibson (8-0, 3 KOs) did a “very good” job emulating Mayweather during training sessions in advance of his clash of unbeatens at the MGM Grand in Las Vegas on Showtime Pay Per View.

“Mayweather is a fighter who is very smart,” Alvarez (42-0-1, 30 knockouts) told a small gathering of reporters on Tuesday at the MGM Grand through translator and Golden Boy matchmaker Eric Gomez. “Whenever you throw a punch, he’s already counter punching. We know that and that’s what we’ve worked for.”

The goal, said Alvarez, is to be sharper and more accurate against the elusive Mayweather (44-0, 26 KOs).

“That’s the motive. The bigger they are, they’re slower,” said Alvarez, explaining his rationale for using smaller sparring partners. “They’re similar. They’re very similar to Floyd. Obviously, Floyd has more experience and he’s a lot better than they are, but that was the motive.”

Dargan informed RingTV.com that Alvarez “never really hurt me,” adding, “I have good defense and I roll off the punches, so even if he hits me clean, I didn’t get the full effect.”

Alvarez believes, however, that he will find a way to sit down on his punches and land hard blows on Mayweather.

“I’ll find a way. I’ll find a way, and that’s what I worked for. I feel very good about that,” said Alvarez. “I’ve studied a lot of his fights, so I’m not just ready for a good fight, I’m ready to win.”

Alvarez scored a knockdown during his unanimous decision over previously unbeaten Austin Trout in April.

“The Trout fight may have made a believer out of you guys, but it was just a progression,” said Alvarez. “Now, it’s time, and I know that a rival like Floyd Mayweather, he’s going to bring out the best in me.”

ALVAREZ SAYS ‘THE JAB IS KEY’ AGAINST MAYWEATHER

One aspect of his repertoire that Alvarez has been working on is his jab against Mayweather.

Earlier on Tuesday, Alvarez met former undisputed heavyweight champion Mike Tyson, with whom he took a picture. Asked what advice Tyson gave him in advance of facing Mayweather, Alvarez said, “he told me to attack him.”

Golden Boy President Oscar De La Hoya, who lost a split decision to Mayweather in their bout for the WBC’s 154-pound belt in May of 2007, had been among Alvarez’s key mentors heading into the bout with Mayweather.

De La Hoya provided RingTV.com with five reasons he believes Alvarez will defeat Mayweather, stating that Mayweather will be stopped in less than eight rounds.

But on Tuesday, news broke that De La Hoya would miss Mayweather-Alvarez because he will be in rehab to address ongoing problems with substance abuse.

“I support him in his great battle,” said Alvarez. “I’m sure that he’s going to win his battle and I’m going to win my battle.”

Mayweather also addressed De La Hoya during his time being interview with reporters, calling him, in part, “a true champion.”

“It wasn’t one of the things where you can wait until next week. When you’re sick, you go get help, but I was surprised. At the same time, I was very supportive and I didn’t try to convince him that he had to be here,” said Schaefer.

“It wouldn’t have been the advice of a friend…I am very proud of him. It’s not perfect timing, but what is? The show must go on. Oscar has a fight where he is and we have a big fight here.”

THE CATCHWEIGHT IS NO PROBLEM, SAYS ALVAREZ

Alvarez will face Mayweather at a catchweight of 152 pounds.

Alvarez said he usually goes into fight week five or six pounds over the limit, adding that “I burn it off. I can lose five, six pounds every time that I work out.”

Alvarez also took time to respond to assertions by Mayweather Promotions CEO Leonard Ellerbe his management put him at a “disadvantage” by allowing him to face Mayweather at 152 pounds.

“I’ll tell you the truth. I’ll tell you the truth of what happened. Why would I give up weight? I’m at 154, and I’m the 154-pound champion. I’ve got the size. Why would I give up weight? I wouldn’t volunteer just to give up weight. But when the negotiations started, they wanted me to go to 147. I said, ‘That’s physically impossible, I can’t do it.’ And then they inched up to 150. I said, ‘impossible, I can’t do it. Those days are over. I can’t make that weight anymore. I’ve grown. And then they went up to 151,'” said Alvarez.
” And then, finally, so we could make I said, ‘look, if anything I’ll give up two pounds. I’ll go to 152.’ I agreed to that. I’m the one that made the decision to go to 152. But after they insisted so much and pressured me so much, they started to inch their way up. I wanted to make the fight, and this is what I wanted. Then, they came up with a second-day weigh-in. They wanted to do a second-day weigh-in and limit what I cold weigh the second day, and I wouldn’t agree to that. And then they tried to force me to stay quiet and to not mention it, and that’s why we didn’t say anything. And we haven’t said anything until now.”

Schaefer said that welterweight contender Marcos Maidana and WBA 147-pound beltholder Adrien Broner will be in Las Vegas this week toward negotiating a clash between the two likely in December on pay per view from the MGM.

“We’re working on that. People are going to be here during this week,” said Schaefer of Broner and Maidana, each of whom is advised by Al Haymon. “But I don’t expect to make any announcements about that this week. Dec. 14 is the new pay per view date. That’s a consideration for that card at the MGM Grand.”

Another potential matchup could be welterweight Devon Alexander in defense of his IBF belt against Amir Khan, who would be making his 147-pound debut likely on Dec. 7 at Barclays Center in Brooklyn, N.Y.

“You know, Khan is going to be in town, and I’m going to be meeting with him and his team and see if we can finalize that fight for Dec. 7 from the Barclays Center,” said Schaefer.

It appears that three-division titlewinner Abner Mares could get his wish for a rematch with Jhonny Gonzalez in the wake of the shocking first-round knockout loss that dethroned him as WBC featherweight titleholder last month.

Schaefer said the return bout could happen this year.

Schaefer also said that WBC junior featherweight beltholder Leo Santa Cruz (25-0-1, 15 KOs), who is coming off last month’s third-round knockout of Victor Terrazas for the 122-pound title, might also return to the ring this year.

“We want to bring Leo Santa Cruz back in the November-December time frame as well,” said Schaefer. “We’re going to basically see how to fit all of these different fights in with all of the different dates that I have and make sure as well from a venue point of view that you put the fights where they belong.”

Haymon advises Wilder and Arreola, who is promoted by Dan Goossen.

“That’s a fight that we want to do, and I have already had discussions with Al Haymon about that, and we’re going to try to get that fight done,” said Schaefer. “Absolutely, we want to get it done, and the sooner the better. I’m going to try to see if we can get it done for November-December as well.”

In other news, Arellano said that he has signed Brazil’s Olympic boxing brothers, middleweight Esquiva Falcao Florentino, and light heavyweight Yamaguchi Falcao Florentino, winners of silver, and, bronze medals, respectively, in the the 2012 London summer event.

“Brazil had not won a boxing medal in 42 years,” said Arellano. “These guys are little phenomenons. Basically I’m looking for a home for them in the United States.”