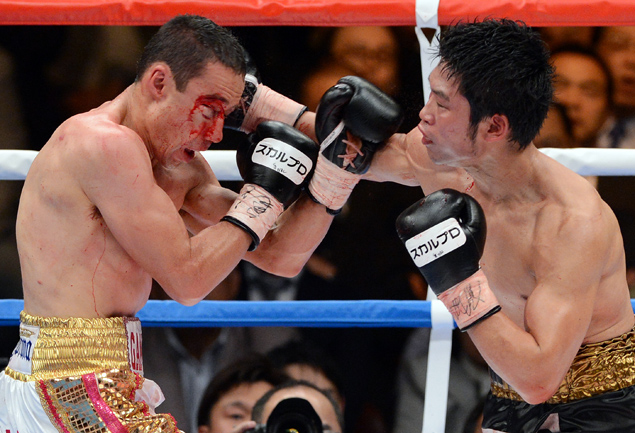 Japanese challenger Takashi Miura (right) exchanges punches with WBC 130-pound beltholder Gamaliel Diaz in the seventh round of their title bout in Tokyo on April 8, 2013. Miura knocked out Diaz in the ninth round, winning the WBC title.

Earlier this year Takashi Miura was given the chance to gain a measure of revenge for his countryman and fellow stablemate Takahiro Ao when he challenged Gamaliel Diaz for the WBC 130-pound crown.

The opportunity wasn’t lost on Miura who’s turned 29 since his career best performance, unseating the grizzled, game veteran for the title. Miura dropped Diaz four times, cutting him to ribbons, before the end came midway through the ninth round.

It was Miura’s second crack at a world title having lost in his attempt to beat fellow Japanese fighter Takashi Uchiyama in a shot at his WBA strap in 2011. Despite dropping Uchiyama, the consensus No. 1-rated junior lightweight, in the third frame the gutsy southpaw was unable to keep his assailant there before retiring at the end of the eighth.

Having lost the purse bid, Miura (25-2-2, 19 knockouts) heads overseas for his first fight outside of Japan and into the home area of his mandatory challenger, heavy handed Sergio Thompson, who’s won the his last 11 fights inside the distance.

“He is a tough fighter with power,” a respectful Miura said of Thompson through his translator Nobu Ikushima. “I am expecting a tough fight.”

The action takes place this Saturday on will be televised on Fox Deportes in the U.S. 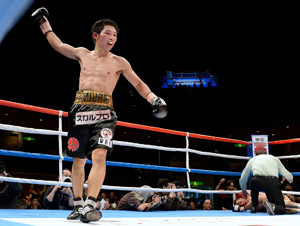 Anson Wainwright: Congratulations on your title victory stopping Gamaliel Diaz in nine rounds. It was a very impressive performance. Could you talk us through the fight?

Takashi Miura: Thank you. I was very happy that I was able fight a fight that I had planned. I was able to use my left effectively and I believe that led to my victory.

AW: How has winning the title changed your life?

TM: I feel more confident as a boxer. To become a world champion is a dream from my childhood come true. I am extremely happy.

AW: It’s time to get back into action, in doing so you meet mandatory challenger Sergio Thompson. Could you share your thoughts on that fight?

TM: I will be fighting Sergio Thompson on Aug. 17 in Cancun. He is a tough fighter with power. I am expecting a tough fight.

AW: Who are the members of your team; your manager, trainer and promoter?

TM: I am fighting out of Teiken Gym in Tokyo. My manager is Ms. Haru Nagano. My trainer is Yuichi Kasai (former junior featherweight world title challenger). I signed with Teiken because they have many world-level fighters in the gym. 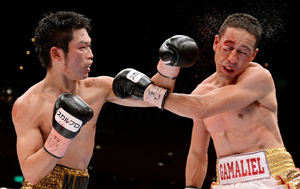 AW: You beat Diaz to win the WBC title avenging Takahiro Ao’s loss to Diaz. How important was that to you? Is a fight with Ao something that could happen?

TM: To be honest, I had just concentrated fighting my fight plan going into the Diaz fight. I do not see myself fighting Ao since he is my stablemate.

AW: You were born in Yamamoto. Could you tell us about your younger days growing up and how you first became interested in boxing?

TM: When I was younger, I had participated in many different types of sports, including swimming, basketball, judo, sumo (wrestling). I believe that has made me the athlete that I am today. My uncle was a boxer and he has influenced me to be a boxer.

AW: What are your thoughts on the other current champions: (WBA) Takashi Uchiyama, who you’ve already fought, (IBF) Argenis Mendez and (WBO) Roman Martinez?

TM: They are all great champions that I respect.

AW: Away from boxing what do you enjoy doing with your time

TM: Outside of boxing I enjoy reading and war movies.

AW: Who is your boxing hero and who do you enjoy watching today?

TM: My boxing hero is my uncle, who got me started in boxing.

AW: In closing, do you have a message for the junior lightweight division?

TM: I am not giving up my belt to anyone!

Photos / Toshifumi Kitamura-AFP, Naoki Fukuda
Questions and/or comments can be sent to Anson at [email protected]and you can follow him at www.twitter.com/AnsonWainwright