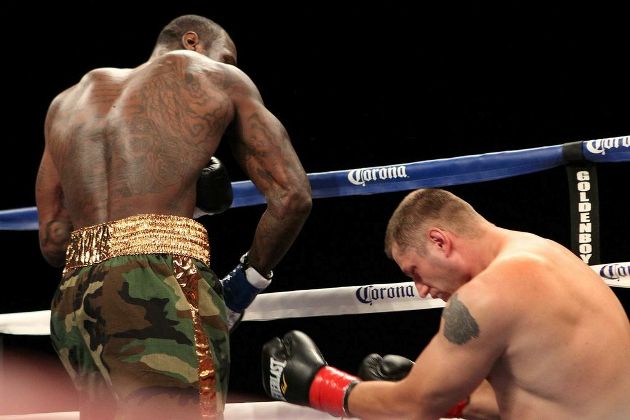 Sergei Liakhovich has directed his advisor to file a formal protest with the California State Athletic Commission, claiming that Deontay Wilder’s first-round knockout punch landed behind his head during last Friday’s heavyweight bout at the Fantasy Springs Casino in Indio, Calif.

According to a statement, Liakhovich’s advisor, attorney Anthony Cardinale, is preparing the protest seeking a “no contest” due to “illegal punches” that led to his knockout at the 1:43 mark.

“My goal for going public is to expose Wilder and show people what really happened, because it was difficult to clearly see his illegal punches on television due to the camera placement and how quickly it happened,” said Liakhovich, whose statement claims that he was warned by Wilder’s sparring partners about illegal blows.

“I also feel that I disappointed a lot of people who believed in me, and I feel it’s important to explain what happened to them. Wilder’s people are sending out press releases to hype him up, even more, so it’s very important for me to expose him for what he is and how he fights.”

“I must have hit him harder than I thought, because he must still have a concussion,” said Wilder, a 6-foot-7 2008 Olympic bronze medalist.

“But I have an idea for him if he feels like the only way that I won is because I illegally hit him. We can spar so I can prove to him that I can knock him out again. But it can be a charity sparring, and I’ll wear four-pound gloves, and we can donate the money to his favorite charity.”

Click here for a video of Wilder’s first-round knockout of Liakhovich.

The first of two vicious right-hand shots from Wilder that ended the fight appeared to land sharply on the left temple of Liakhovich, landing him flat on his back where he remained, legs and arms twitching.

“If he had hit me in the face, fair and square, I would have kept my mouth shut and said he was the better man. Everybody’s going around saying nobody can stand up to his power — 29 knockouts in 29 fights,” said Liakhovich, whose statement is accompanied by a photo meant to illustrate his version of what happened.

“But any heavyweight would go down from a punch behind the head. That’s why it’s an illegal punch. There’s nothing you can do when you get hit with a punch like that. Your body just goes wobbly with no balance at all. If he is allowed to continue throwing illegal punches like the one he hit me with behind my head, somebody is going to get seriously hurt. I can’t allow him to get away with that anymore.”

“It was a fantastic, explosive performance by Deontay, and I felt like it was one of his best performances, and for Liakhovich to file some sort of bogus protest really hurts his own legacy as a former world champion,” said Deas.

“There’s no merit whatsoever to this, and it’s really just without any basis in reality. It’s baffling. I’m completely baffled. My only thought when I heard that he was protesting was perhaps that the fight was made in the first place.”

Meanwhile, Deas is ready to move on to another opponent.

“There are several opponents that I would like to see Deontay fight. I would like Tony Thompson, Manuel Charr, the winner of Seth Mitchell and Chris Arreola is very interesting. Tomasz Adamek is interesting,” said Deas.

“We’ve actually accepted Thompson and Adamek at various times, but we’ve never been able to quite get it made. Bryant Jennings is interesting. That’s another good fight. We’re at the point now where we’re looking for something big.”