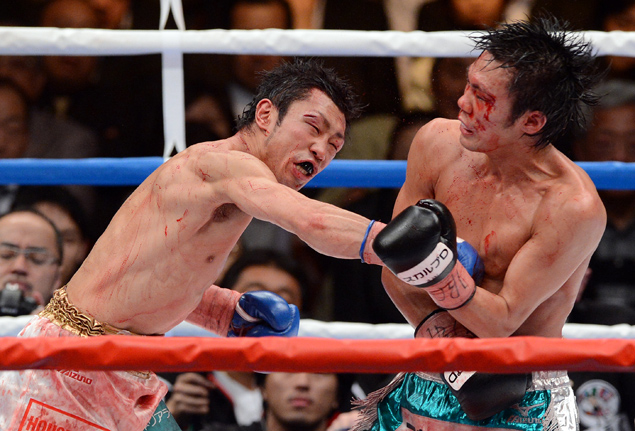 Earlier this year Akira Yaegashi wrested the WBC and RING magazine flyweight belts from the grasp of his former amateur nemesis, Toshiyuki Igarashi, winning a unanimous decision by scores of 115-110, 116-109 and 117-108.

To his credit, the hard-charging Japanese fighter has always looked to challenge himself, winning the OPBF 105-pound crown in just his fifth pro fight. Yaegashi challenged the vastly more experienced Eagle Den Junlaphan for the WBC strawweight title in 2007 (in just his seventh pro bout), losing a wide decision. But he managed to keep himself in the hunt for a world title for the most part, even beating the current WBC 115-pound titleholder Srisaket Sor Rungvisa (though it must be noted it was Srisaket’s debut), before collecting the Japanese national title, which he defended three times. 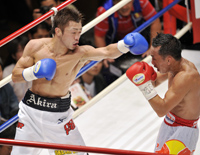 In late 2011, he was to get his second world title opportunity and this time he wasn’t going to leave without the title. In a war of attrition he was able to show considerable heart to rip the WBA strawweight title from Pornsawan Porpramook in 10 heated rounds. It was one of the best fights of the year but due in part to it taking place in Asia as well as being at strawweight it never received the recognition it deserved.

Having snared his second world title earlier this year, it’s time for Yaegashi (17-3, 9 knockouts) to return to action when he meets the WBC’s No. 10 ranked contender, Oscar Blanquet, on Monday in Tokyo.

When speaking with RingTV.com through the doyen of Japanese boxing, Joe Koizumi, Yaegashi said of his Mexican challenger, “he is a hard-puncher, but I hope to be careful of his power and wish to keep my belt in the end,” before adding a future aspiration: “I may move down to the 108-pound class to win my third world (title) belt in the future.”

When asked about Yaegashi, Koizumi says “Yaegashi is originally a fleet-footed boxer with good hand speed, although he recently fought  give-and-take, toe-to-toe battles with his opposition. He is also originally a 105-pound boxer though he now reigns as a 112-pound titlist. He should return to his previous style of hitting without getting hit, and if so, he may be able to keep his flyweight belt with his speed and skills, even if his power shouldn’t prevail in this division.”

Anson Wainwright: Tomorrow you fight Oscar Blanquet. What are your thoughts on that fight and him as a boxer?

Akira Yaegashi: He is a hard-puncher, but I hope to be careful of his power and wish to keep my belt in the end.

AW: In April you won the WBC and THE RING belts unanimously out-pointing Toshiyuki  Igarashi. Could you tell us about that fight?

AY: It was really a hard fight, but I did my best and fortunately could win the fight and the belt. I lost to him on four occasions while we were amateurs.

AW: What did it mean to you when you won? What are your thoughts about also having the RING belt?

AY: I was truly happy to obtain the second belt in the second division. I was also very much excited (to win) THE RING belt. That’s fantastic. 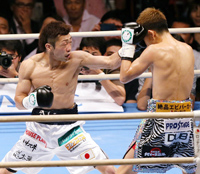 AW: Last summer you met fellow Japanese fighter Kazuto Ioka in a strawweight unification. Looking back what are your thoughts on that fight?

AY: It was a very tough and close fight. It is funny that I became much more popular than previously, even though I lost to Ioka. I may face Ioka again with my belt on the line and with Ioka as the challenger next time.

AW: Before that you were involved in one of the best fights of 2011, an all-out war with Pornsawan Porpramook. Can you tell us about that fight?

AY: It was a give-and-take fight. I won not only by physical power but also by mental strength. You can’t do it again. It’s such a gruelling battle.

AW: You are from Kitakami, Iwate in Japan. Could you tell us about your younger days?

AY: I was a regular boy but was good at all sports though I was small. I was a good boy that respected my parents and teachers like others. That’s our tradition.

AW: How did you first become interested in boxing and then take it up?

AY: As I watched boxing on TV, I became interested in it and then tried to learn how to box.

AW: What do you think of the flyweight division and the other current champions (WBC/WBO) Juan Estrada and (IBF) Moruti Mthalane? 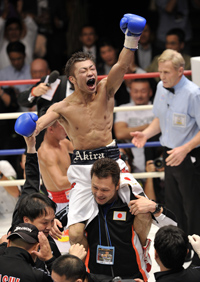 AY: I don’t care about who are champs of other organizations. I just concentrate on defending my belt.

AW: What do you enjoy doing away from boxing? What are your hobbies and interests?

AY: My hobby is watching boxing rather than doing boxing.

AW: You are a two-weight world champion. What goals do you still have in boxing?

AY: I may move down to the 108-pound class to win my third world belt in the future.

AW: Who is your boxing hero?

AW: Lastly do you have a message for Oscar Blanquet ahead of your fight?


Photos / Toshifumi Kitamura-AFP, AFP, STR-AFP, Naoki Fukuda, Yoshikazu Tsuno-AFP
Questions and/or comments can be sent to Anson at [email protected]and you can follow him at www.twitter.com/AnsonWainwright