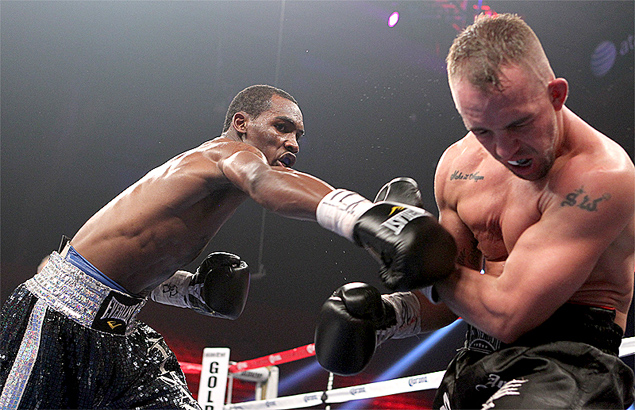 Jermall Charlo was born a minute earlier than his twin brother Jermell Charlo, but has been trying to play catch up with him in recent times. Both twins are undefeated professional boxing prospects campaigning in the junior middleweight division, but Jermell turned pro 10 months before his brother did, and has competed in seven more fights than his brother has.

The 23-year-old twins are as close as can be, inseparable for life. They are also each other’s greatest rivals, compelled as much by a need to assert their own individuality as anything else.

“Growing up, he was like my competition. It was always like I always had somebody pushing me to the top,” said Jermall Charlo (14-0, 10 knockouts). “I am my own fighter and I have my own style. But I can’t get away from that, he’s my twin brother. We both have our own goals and our own type of things we want to do.”

The elder Charlo will continue his campaign towards prominence this Friday, when he faces durable journeyman Antwone Smith (23-4-1, 12 KOs) in a 10-round bout at the Fantasy Springs Casino in Indio, Calif. The bout will be televised on Showtime’s ShoBox: The New Generation as part of a tripleheader headlined by heavyweight prospect Deontay Wilder against former heavyweight titleholder Siarhei Lyakhovich.

Charlo was born in Lafayette, La., but raised in Houston’s Third Ward. Both brothers began boxing at age 8, inspired by their father Kevin Charlo, a local featherweight amateur standout. Sports were a way to keep his sons out of trouble and immersed something positive.

“My Dad kept us in sports because he knew how athletic we were,” said Charlo. “Even though I had a shaky childhood alongside my twin brother, we just kept pushing each other and we never wanted to give up on our first love.” 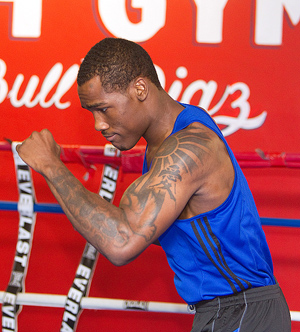 Jermall would have the more extensive amateur career of the two, competing in an estimated 75 amateur bouts compared to his brother’s 63, losing just six. Jermall earned three Texas Golden Gloves titles, but says he would’ve fared better in National tournaments had he had funding and transportation to support himself. Jermall turned pro in 2008 at the age of 18.

In an effort to maintain their individuality, the twins have only fought on the same card three times. Jermell’s Twitter handle (@TwinCharlo) immediately makes note of the fact he is one of a set, while Jermall’s (@FutureOfBoxing) only alludes to his career aspirations.

The tell-tale sign to distinguish the two is their hair; Jermall has a short buzz cut while Jermell has braids. Jermall also has a tattoo on his chest that reads “Heart of a Lion” with a ferocious feline beneath it, while Jermell’s upper body tattoos are limited to his arms.

When asked the major difference between him and his brother, Jermall points out his greater knockout percentage (71.43 percent to 47.62).

“I don’t wait as much, I kind of want to go and get it over with,” said Jermall. “I guess I’m a better finisher. I want to be just like my brother now and get to 21-0 and keep giving it my best.”

“Jermall is making a name for himself, which is good, and with him going with [manager] Al Haymon only makes it better,” said Shields. “They’re totally different fighters. Jermall is more of a puncher than a boxer. But both are very focused.”

If Jermall didn’t get out of the blocks to his career as quickly as his brother, he has made up for lost time in 2013. Friday’s fight will be his fifth fight of 2013, which included knockouts of Orlando Lora (then 29-3-2) and Luis Hernandez (then 22-5-2). Smith, 26, of Miami, Fla., is coming off an impressive run of his own lately, having spoiled the unbeaten record of Ronald Cruz two fights ago before dominating faded former lightweight champion Jose Luis Castillo earlier this year.

“Charlo’s a little arrogant, but I love that,” says Smith. “I’m here to give him a reality test. He thinks everything comes easy. Basically, he’s been fighting a bunch of cab drivers, a bunch of bus drivers. He thinks he’s done something. He’s talking big noise, but he’s never been past six rounds, and they’re worried about that.”

For Charlo’s part, he insists he’s not worried at all.

“It’s a typical fight for me,” said Charlo. “I’m well-seasoned, I know I don’t have a lot of fights to show but I see myself as being on a level above him. I’m not looking past him but I fought Orlando Lora and I think I had more to worry about facing Lora than I do facing Smith. I’m really hoping to prove my body attack since I know that he’s kind of weak to the body.

“I’m closing the first chapter of my professional career so I’m trying to make it the best. I want to be ranked as among the greatest so I can’t stop here. I can’t let no one like Antwone Smith push me back.”